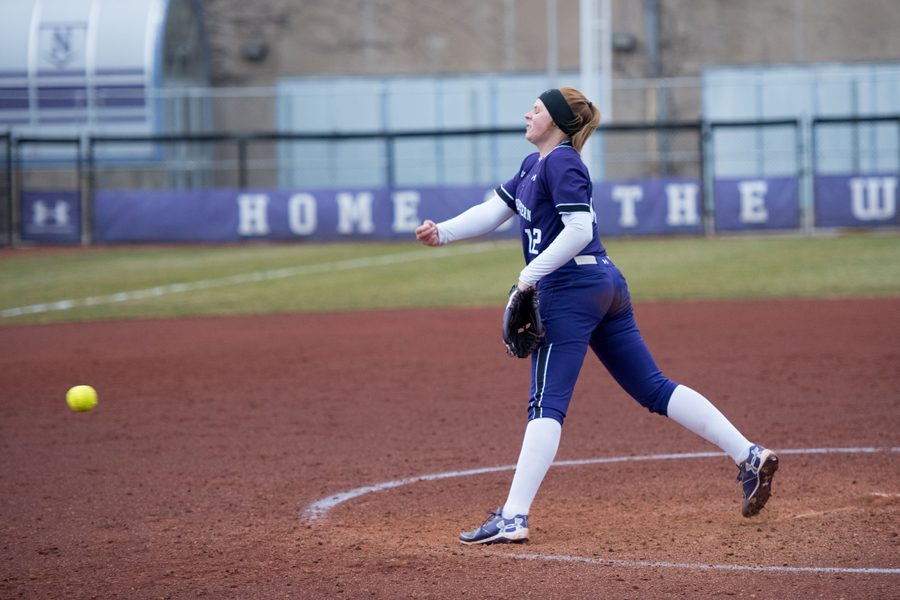 Kenzie Ellis delivers a pitch. The junior pitcher will look to step up in the possible absence of fellow pitcher senior Kaley Winegarner this weekend.

Coming off a disappointing showing last weekend at the Big Ten/ACC Challenge, Northwestern will have another opportunity to prove itself against quality competition at the Mary Nutter Collegiate Classic in Cathedral City, California this weekend.

The Wildcats (5-4) will play four games in three days, taking on San Diego State (3-8) and Long Beach State (9-1), which received votes in the latest NCAA rankings, Friday, No. 11 Tennessee (10-1) on Saturday and St. John’s (2-3) on Sunday. NU has already played San Diego State this season, beating the Aztecs 7-6 in extra innings in Arizona.

Following a 4-1 start to the season at the Kajikawa Classic, the Cats dropped three of four games in Raleigh against Louisville and North Carolina State. Coach Kate Drohan said the team is looking for more consistent play as they move closer to the Big Ten season.

Specifically, NU is looking for increased production from its two seniors at the top of the lineup, center fielder Sabrina Rabin and shortstop Marissa Panko. Rabin hit .333 at the Kajikawa Classic but went just 2-for-15 in Raleigh to lower her season average to .242, not ideal for a leadoff hitter. Panko had a pair of multi-hit games last weekend but is hitting .276 for the season, well off last year’s mark of .329.

“They haven’t been able to generate the offense we know we’re capable of,” Drohan said. “We’re working on some fine-tuning, some adjustments, but we have a lot of faith in them. They’re both really strong competitors, it’s just a matter of when they’re going to break out, not if.”

The Cats might also be short a pitcher this weekend. Junior Kaley Winegarner suffered an injury last Friday and her status is uncertain. Drohan said she will travel with the team to California.

NU does have the resources to compensate for the injury, however. The Cats have four additional pitchers on their roster, all of whom are capable of starting games or pitching in relief.

“It doesn’t really change our game plan at all,” senior catcher Sammy Nettling said. “What’s great about our team is we have four other pitchers who can throw, so everyone has her back. It’s going to be a matter of certain people stepping up more than usual.”

NU’s offense has been led by a pair of freshmen, second baseman Rachel Lewis and pitcher Kenna Wilkey, both of whom are hitting above .350. Wilkey is also 2-0 in the circle with a 2.62 ERA, and figures to be one of the Cats’ strongest hitters and pitchers for the next four years. Sophomore Morgan Newport and junior Kenzie Ellis have also pitched well in the early going.

NU has participated in this tournament for the last several years and went 2-2 in Cathedral City last season. Drohan said the event is the team’s favorite tournament of the year and the location elevates their play.

“The venue is really great,” Drohan said. “All of our families come out to watch us. We’re going to have a strong contingent of alums there. Other than (the Women’s College World Series), I think it’s the single best softball event in the country.”