ETHS junior part of team to send project into space 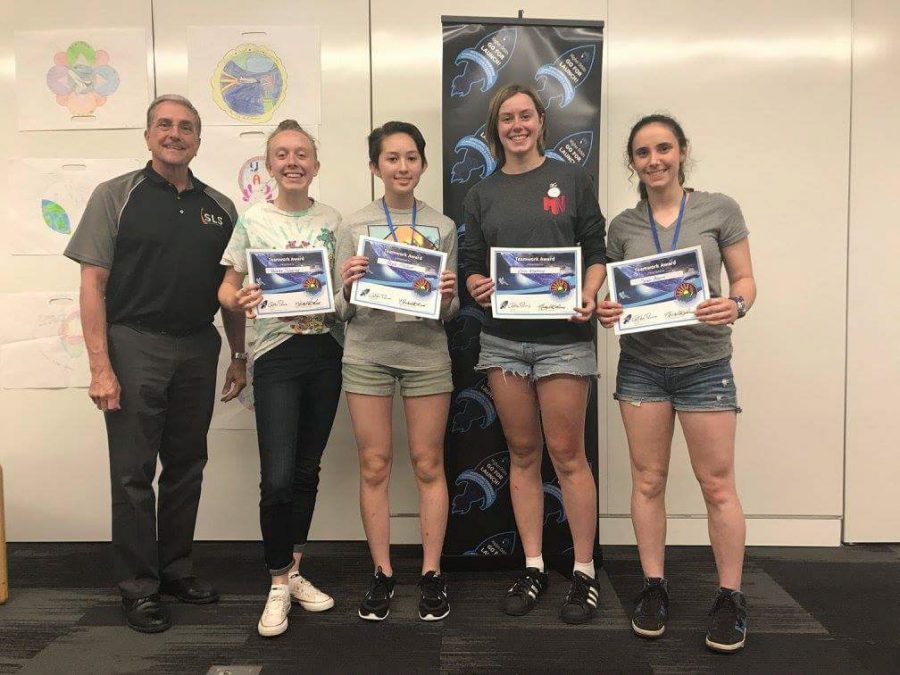 Evanston Township High School junior Sarah Bloom and her team after winning a competition. Bloom said her team’s experiment will be launched into space sometime this summer.

Evanston Township High School student Sarah Bloom found out this summer over Facebook Live her all-women team won a competition that will allow them to send an experiment to space. At first, she didn’t believe it, she said.

“Honestly, at first I was kind of disbelieving, in shock,” the high school junior said. “You know I was like, ‘Mmm, I don’t believe it, I don’t know if that could really be happening,’ but it was and it is.”

For three days last summer, Bloom participated in Go For Launch!, a program through the nonprofit Higher Orbits, where students across the country work in teams to develop a space-related experiment, Michelle Lucas, the founder and president of Higher Orbits, said. The experiments are evaluated by a panel of judges and the winner gets their experiment flown to the International Space Station.

Bloom said her team’s experiment will be launched into space sometime this summer, but currently her group is working with engineers from Space Tango — a company that designs, builds and operates systems that facilitate microgravity research and manufacturing — to refine the experiment.

Bloom’s four-person team, called NESS — an acronym using each person on the team’s first initial and also the Hebrew word for “miracle” — created an experiment that will send bumblebees into space and observe how they behave in microgravity, Bloom said.

“(Bloom and her team) had great scientific reasoning behind (their experiment),” Lucas said. “It was an interesting and unique experiment, and they did a great job of research and providing a lot of details. … It checked all the boxes as far as being good science, likely to have good results and somewhat unique.”

Bloom said that observation of the bees could set preliminary research for sending humans into hibernation spaceflight. It’s a “low-risk” way to determine if hibernation in microgravity has any negative effects on organisms, she said.

Bumblebees’ population growth has been having trouble in recent years, Bloom said, and bees are an important part of the ecosystem.

Kristen Perkins, Northwestern’s partnership coordinator with ETHS, said she first met Bloom when she was a freshman in high school through an ETHS program called Women in STEM. WiSTEM is a club that works closely with NU to create a supportive community of girls who are interested in STEM fields, Perkins said.

Perkins, who also works with WiSTEM, said Bloom is one of her “rockstars.” She really got to know Bloom by driving her and other ETHS students back and forth to the Go For Launch! program in Deerfield, Illinois over the summer.

Perkins said Bloom was good at engaging everyone riding with them in their rides to Deerfield.

“(She was good at) breaking the ice and talking to students who came from different backgrounds, who didn’t really know each other at all,” Perkins said.

She added that Bloom helped everyone in the car feel included — a skill she said is rare to see in high school students. She said Bloom had a “natural leadership quality.”

Bloom said she most enjoyed working together with her team on the project as they brainstormed ideas and researched.

Bloom said in the future, she would love to work at NASA or become an environmental engineer. For now, the high schooler is continuing to take higher level science classes to help her understand how the world works in more “depth” and “detail.”

“Space has always called me just because of how much we don’t know and how much there is still to find and how many problems we still have yet to solve,” Bloom said.