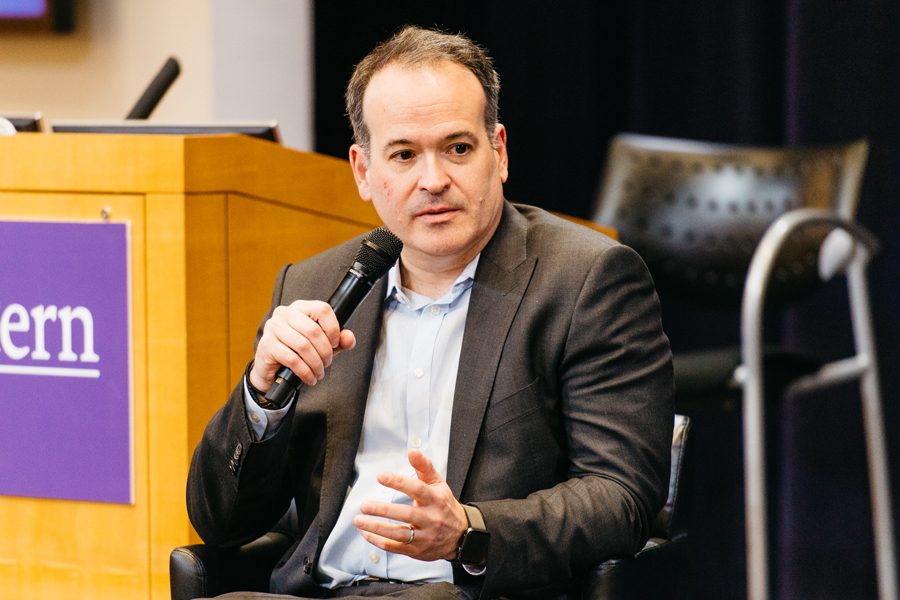 “We are here to serve them and not to serve ourselves,” Murray told the audience of about 35.

The conversation was held Wednesday in the McCormick Foundation Center and led by Tim Franklin, senior associate dean for the Medill School of Journalism, Media, Integrated Marketing Communications.

Murray said the most important part of any journalistic work is “learning how to think.” Medill taught Murray how to challenge himself and and question his own assumptions, he said.

The journalist recalled when his professor at Medill tore apart his leads, which he said was comical but also humbling in the right ways.

“You can always get better,” Murray said. “If you play professional football, you don’t just show up on Sunday and play. You’re practicing every day.”

Murray and Franklin addressed the common perception of The Wall Street Journal as a right-leaning publication, to which Murray said it is important for readers to to draw a line between opinion and news coverage. Murray mentioned many readers are surprised to learn the opinion section of the paper is run separately from the news section.

While many also think of The Wall Street Journal as a print publication, Murray said, it is necessary for its staff to carry out an “existential discussion” on how the publication can integrate into the digital age. The team understands that its future growth will not be in print readership, he said, and is focused on learning how to cater to a digital audience.

“For me, being digital is not about chasing clicks,” Murray said. “It’s about taking the great heritage that we’ve got and the strong journalistic standards we have and keeping them strong.”

With a surge of new journalistic technologies, Murray said he is careful in evaluating which ones to implement at The Wall Street Journal. He said journalism is currently undergoing a transformation — much like the movie industry in 1915, which was on the precipice of an explosion of new technology that completely changed the business.

Medill sophomore Jasmine Teng said she found that comparison to be “quite apt.”

“We’ve got an explosion of new tools to tell stories and it’s never been more exciting,” Teng told The Daily.

Murray also spoke about the reasons behind the erosion in trust between news organizations and the readers they are attempting to serve.

“One of the trust problems is that there are a lot of journalists who are building their own personal brands through opinion and trying to be controversial in columns,” Franklin said.

President Donald Trump is neither the first nor the only public figure who has denounced press coverage as a political tactic, Murray said, though he observed the issue is currently reaching a “fever pitch.” He said it is important to accept journalism as a human activity that can never be perfect.

“I always tell writers to keep the focus away from yourself and on the stories,” Murray said. “That’s what people care about.”

A previous version of this story misstated Matt Murray’s position at the Wall Street Journal. He is executive editor. The Daily regrets the error.