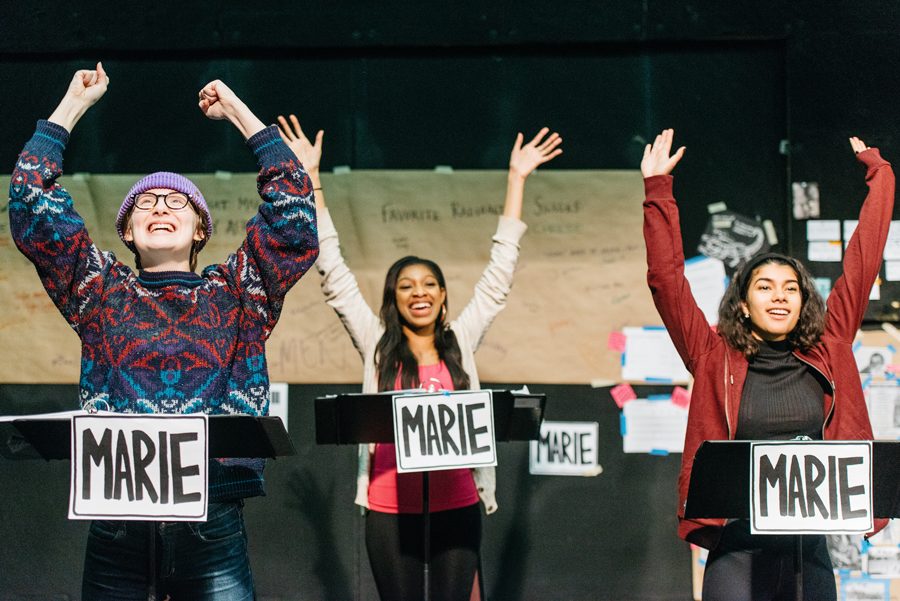 The cast of “Marie in Tomorrowland” rehearses in the Mussetter-Struble Theater. The musical follows the repercussions of Marie Curie’s work with radiation in a post-nuclear world.

Abandoning the traditional format of a structured plot, the American Music Theatre Project’s “Marie in Tomorrowland” instead features several versions of Curie as she explores humanity’s relationship with the nuclear age, Brannon Bowers said. A staged reading will take place in the Mussetter-Struble Theater on Feb. 24.

Bowers — the producing director of American Music Theatre Project — said each version of Marie Curie is characterized by a specific style of music. Unlike traditional musicals, which feature just one genre of music, “Marie in Tomorrowland” incorporates everything from J-Pop to rock ballads to musical theater. Bowers said he hopes the abstract show will challenge the audience’s presumptions about what successful musical theatre looks like.

Co-creator Maggie-Kate Coleman said the show isn’t a biography of Marie Curie, but rather explores the modern repercussions of Curie’s work with radiation by taking Curie through a history of nuclear disasters, ranging from Chernobyl to Fukushima.

“(We’re) trying to examine living in a post-nuclear world,” Coleman said. “What does that mean to be humans? What does that mean about humanity after World War II, after the dropping of those bombs? It’s like the human race became a very different thing. The possibility of total destruction became real and, unfortunately, seems relevant for us today.”

Coleman said her primary motivation to write this show stemmed from her desire to explore the experience of women in science. She said she found it inspiring how Curie managed to accomplish great things despite all of the pressures and adversities she faced.

“I feel like we can relate to seeing strong, powerful women — who just want to do their own work and be left alone — be vilified by the press and vilified by their colleagues,” Coleman said.

Bowers said one of the most worthwhile parts of the project is allowing students and professionals to collaborate together on the same work. He said the connections forged between professional artists and students can make the theater world smaller and result in future employment opportunities for these students after they graduate.

In the case of “Marie in Tomorrowland,” students have had the opportunity to work with creators Coleman and Erato A. Kremmyda and director Sam Pinkleton to shape a new piece of musical theater.

The show is being workshopped at Northwestern as a part of a partnership between the University and the Jonathan Larson Grants, associate artistic director of American Music Theatre Project Ryan Cunningham said. The grants are funded through the American Theatre Wing and provide funds and opportunities for emerging writers with a desire to reinvent the musical form to produce their work.

Northwestern’s new partnership with the Jonathan Larson Grants aims to not only give artists a place to bring their work to the next stage of development, but also to bring a wide range of voices to the Northwestern theater scene, Cunningham said.

“It helps diversify the way we select shows and diversify the people who are selecting the shows,” he said. “It isn’t just the folks who work at AMTP, but it is a larger community of folks who are identifying these as the next generation of artists.”