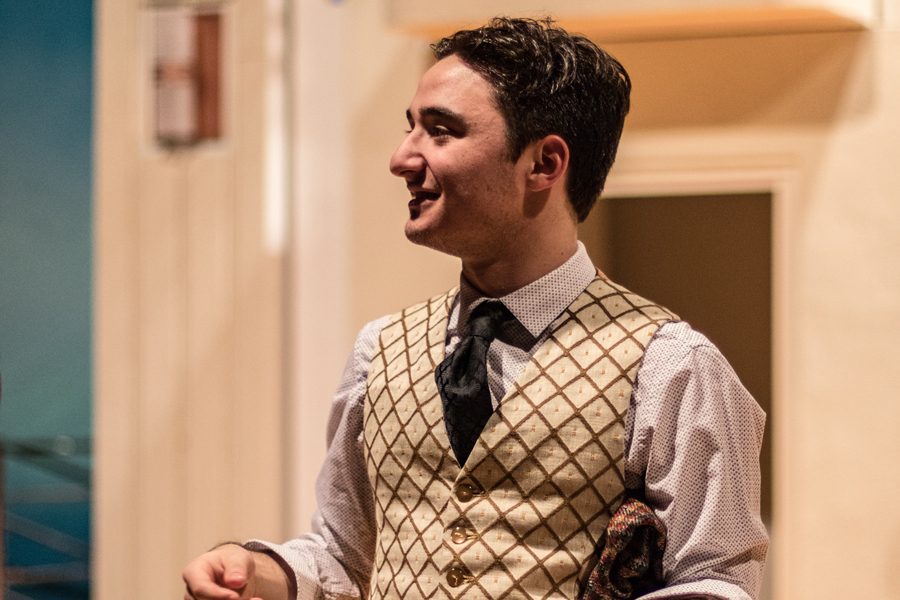 It’s the unwritten understanding of every play: The actors on stage are playing characters, and the audience accepts that those characters are real in the context of the show.

The Wirtz Center’s production of “Twelfth Night, or What You Will” makes that understanding glaringly clear. Communication sophomore Hale Stewart said the play opens with actors greeting the audience in costume but out of character. In this way, the company sets up the motif of “facades” that is explored throughout the show.

“We call attention to the fact that our acting in and of itself is sort of putting up a facade,” Stewart said.

Shakespeare’s “Twelfth Night” tells the story of twins Viola and Sebastian who are separated after a shipwreck. Believing her brother dead, Viola disguises herself as a man to find employment and unwittingly becomes the love interest of a nearby countess. Audiences can experience the chaos that ensues Feb. 16-25 at the Ethel M. Barber Theater.

Director Jeffrey Mosser said he wanted to use the disguises that many characters — like Viola — utilize throughout the show as a way to explore the concept of abandoning facades in the modern world. He explained that while people in our society might not use literal disguises, they can often pretend to be someone they’re not to impress at a job interview or succeed in their love life.

“I hope someone in the audience finds the courage to let down a facade in their own lives,” Mosser said. “(I hope) they are able be honest with the person sitting next to them, that they’re able to find their own truth and live it fully following this show.”

Communication junior Chloe Howard said, in the spirit of the play, actors were encouraged to explore and have fun. They learned about and incorporated commedia dell’arte, an Italian art form that utilizes physicality in establishing archetypal characters, she said.

Howard, who plays the countess Olivia, said one of the core components of the clowning comedy style is determining how a character’s center of gravity influences their overall physicality. For example, some characters might walk leading with their head, some with their stomach, and some with their chest. She said she found it interesting to take these techniques and use them to further understand her character, even though the countess isn’t archetypal.

While the comedy used comes from the Italian Renaissance, the play is set in the jazz era. Mosser said this was an intentional choice, as he felt the overindulgent lifestyles in the show were similar to those of the jazz age. The play features the excessive drinking, eating and dancing that was common in the era, Mosser said.

Mosser also utilized postmodern jukebox songs — covers of contemporary songs in a swing or jazz style — throughout the show. Not only did this fit in with the show’s setting, Mosser also pointed out it furthered the theme of facades, as covers of songs put on the “mask” of a different style.

Mosser said he aims to highlight the current relevance of the themes in the show by incorporating modern elements. He discussed the importance of choosing a fresh setting for a classic play on the basis of it providing “strong point of view.”

“Our play goes far beyond just the aesthetic ideas of… ‘Let’s put Shakespeare in a period that is just aesthetically pleasing to an audience,’” Mosser said. “Our goal by drawing parallels with the audience is to highlight how Shakespeare has always been a part of our lives.”