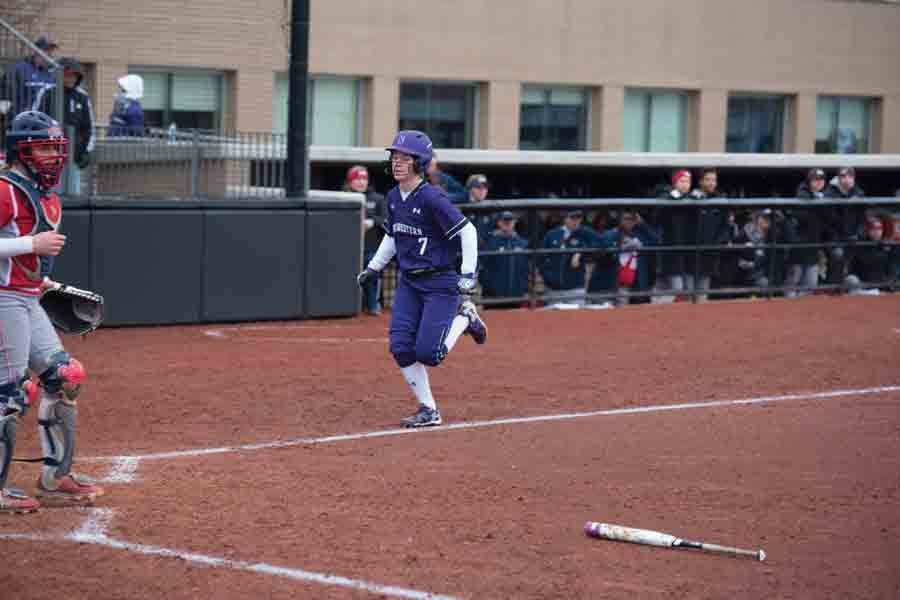 Morgan Nelson runs toward the plate. Northwestern went 1-3 in the Big Ten/ACC challenge this weekend.

Northwestern failed to build on its momentum from a 4-1 start to the season, dropping three of four games this weekend at the Big Ten/ACC Challenge in Raleigh, North Carolina. The Wildcats (5-4) were swept in a doubleheader by Louisville (6-3) on Friday before splitting two games against North Carolina State (5-4) on Saturday and Sunday.

The two losses on Friday were especially frustrating for NU. In the opener, the Cats rallied from a 2-0 deficit to take a 6-2 lead into the seventh and final innings. Sophomore pitcher Morgan Newport, who had been stellar to that point in 3.1 innings of scoreless relief, simply could not close it out.

With runners at first and second and two outs, Newport committed a throwing error, allowing a run to score and extending the game. Cardinals catcher Jenna Jordan then hit a three-run home run to tie the game and eventually sent it to extra innings. Louisville pushed across a run in the eighth to secure a 7-6 victory.

“I just have to understand that that game is over and I can’t change anything that happened in that game,” Newport said. “All I can think about is how I can help my team the next game and my next outing.”

NU had a shot at redemption later that afternoon, but once again came away disappointed. The Cats took their first lead of the game in the sixth when junior Morgan Nelson scored on a wild pitch, but Louisville answered in the bottom half with a run against junior pitcher Kaley Winegarner, who pitched well despite the 3-2 loss. The Cardinals scored the winning run in the seventh on a failed fielder’s choice.

“Our struggles came in giving them too many free bases,” coach Kate Drohan said. “We gave them too many chances. Top to bottom, our staff got some gritty outs, and then we had some opportunities to shut it down and we didn’t.”

NU did pick up a 3-1 win Saturday against the Wolfpack behind a complete-game two-hitter from freshman pitcher Kenna Wilkey, who improved to 2-0 on the season. Wilkey struck out 11 and had three hits and an RBI in support of her own cause. She continued to impress at the plate and in the circle, raising her batting average to .360 and lowering her season ERA to 2.62.

Freshman Rachel Lewis was also a bright spot, hitting two home runs in Raleigh. She is hitting a team-high .393 for the season.

But with a chance to sweep NC State and finish 2-2 on the weekend, the Cats came up short, falling 4-2. Senior pitcher Nicole Bond struggled, walking four batters and giving up three earned runs in just 1.1 innings. Newport and Wilkey were solid in relief and Lewis hit her second home run of the weekend, but a NU rally in the seventh fell short.

“In terms of offense, I think we had a lot of missed opportunities, we left a lot of people on base,” Drohan said. “We did a good job generating those chances, but we didn’t do a good job of delivering the runs.”