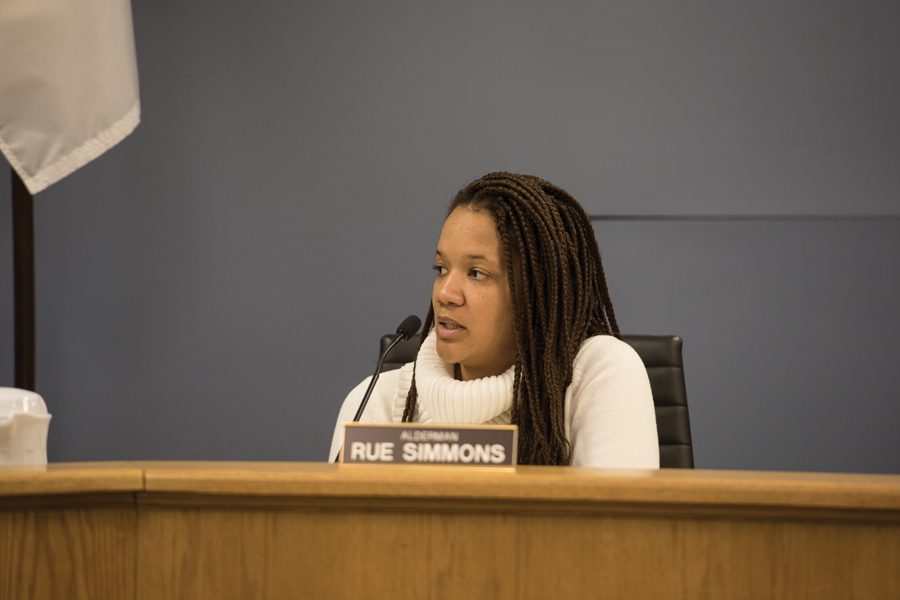 Ald. Robin Rue Simmons (5th) speaks at a meeting. Rue Simmons said she planned to encourage all neighborhoods who did not have a “block club” — a group of neighbors who make sure the block is safe by sharing information and identifying potential concerns — to form one.

City officials announced to residents at a 5th Ward meeting Thursday that officers executed a search warrant on a residence in connection with a murder case as the suspect still remains at large.

About 40 people attended the meeting during which Mayor Steve Hagerty, police officers, residents and Ald. Robin Rue Simmons (5th) discussed updates in the investigation into the shooting death on Feb. 8. In the incident, a 20-year-old man, Yakez Semark, was shot in the chest following a physical altercation in the 1800 block of Hovland Court.

Deputy police chief Aretha Barnes said officers executed a search warrant earlier Thursday on a residence related to the murder. At the time of the meeting, the search was still ongoing, but Barnes said she could not share any additional information.

At the meeting, Hagerty said safety in the community is a priority, adding that the Evanston Police Department and the North Regional Major Crimes Task Force are working on the case.

“Anything that we can do as a city to increase the safety in that area, we are going to look to do,” Hagerty said. “I just wanted you guys to hear that directly from me.”

Evanston resident Vanessa Alvarado, who lives on the block where the Semark was killed, told The Daily that the residents on her block have been very upset and confused since the incident.

They don’t feel safe with the suspect at large and are looking for updates, she said.

“I’m hoping that, first of all, they catch the person that is responsible for the murder,” Alvarado said. “But also I was asking why was it that they were in that particular area.”

Rue Simmons told The Daily she planned to encourage all neighborhoods who did not have a “block club,” a group of neighbors who make sure the block is safe by sharing information and identifying potential concerns, to form one.

At the meeting, Rue Simmons said she had previously started a block club in the 2000 block of Dodge Avenue, working with officers and making sure residents were calling them directly. That block is “great” now, she said.

Alvarado told The Daily that a block club would hopefully allow her to get in contact with all the residents on her block, especially those she does not see as often. Alvarado added she is already friends with many of the block residents who have young children.

“I just want to make sure somebody with a gun is not running around … right in front of my house,” Alvarado said at the meeting. “We have young children that are terrified right now.”