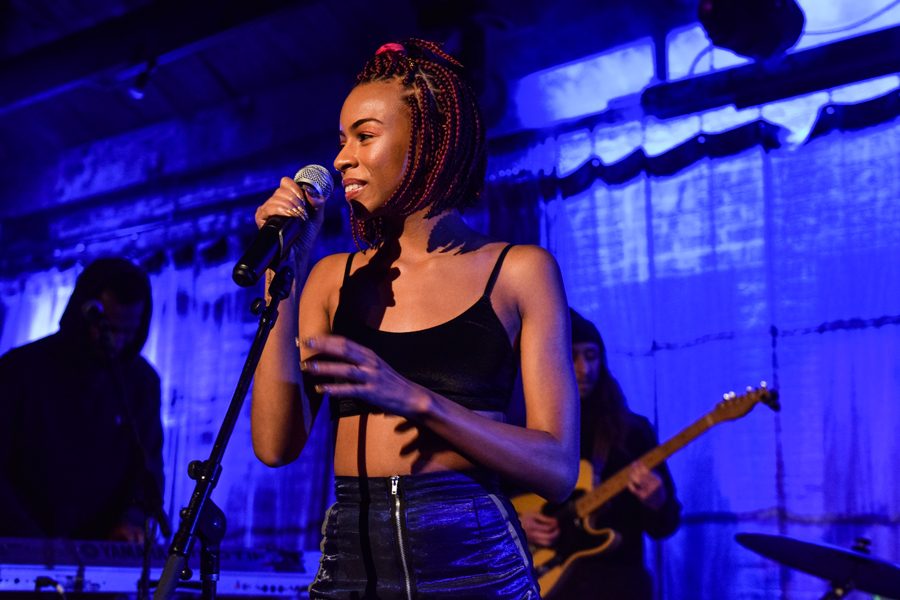 Chicago-based artist Ravyn Lenae looks at the crowd, making eye contact with fans only a few inches away. Lenae, along with Knox Fortune, performed at SPACE Thursday night.

The event, put on by A&O Productions, attracted approximately 150 students, whose ticket proceeds went to Northwestern Arts and Music Programs for Education in Detention Centers.

Kerry Brown (SESP ’14), an AMPED coordinator, got involved with the organization during her time at Northwestern before picking up a full-time position after graduation. She found the hip-hop composition program — which connects students with incarcerated young men in Cook County — to be special and transformative, she said.

“Using the arts as way to allow the young people in detention centers to tell their stories to those of us on the outside is really important,” Brown said. “I’m excited to be able to spread that message across Northwestern.”

Fortune began the night, stepping on stage to an eager crowd, and sang songs from his recently debuted album, “Paradise.” He also performed the unreleased song “Shirtless” and a rendition of “All Night,” a popular 2016 hit with Chance the Rapper.

After Fortune, Lenae danced her way onto the stage before kicking off her set with some of her older tracks, like “Spice” and “Thirst.” The singer and songwriter later played songs from her recently released EP, “Crush.”

Lenae’s high-energy dancing and range of vocals provided a change of pace from Fortune’s performance, which was more relaxed and laid-back. Both, however, easily interacted with the crowd thanks to SPACE’s small size. Audience members sang into microphones with the artists and gave out hugs.

Isabel Schwartz, a Lenae fan, experienced the concert from the front row and was one of those lucky audience members, making it what she called one of the best shows she’d ever seen.

“(Lenae) put the microphone in my face and I just giggled and cried inside,” the Medill senior said. “She was right there. It’s just such a small venue that you hear everything and feel really connected.”

A&O co-chair Louisa Wyatt said she hoped the show would bring quality local music to Northwestern students, as both artists are Chicago-based, she said.

Wyatt also hoped the concert would allow students to leave having had new and unique experiences, she said.

“To listen to something in your bedroom with your headphones in and connect and have your own relationship with this song and then to see it performed by the artist and in the artist’s presence, it can take on an entire new meaning for you,” the Medill senior said. “That’s really cool.”