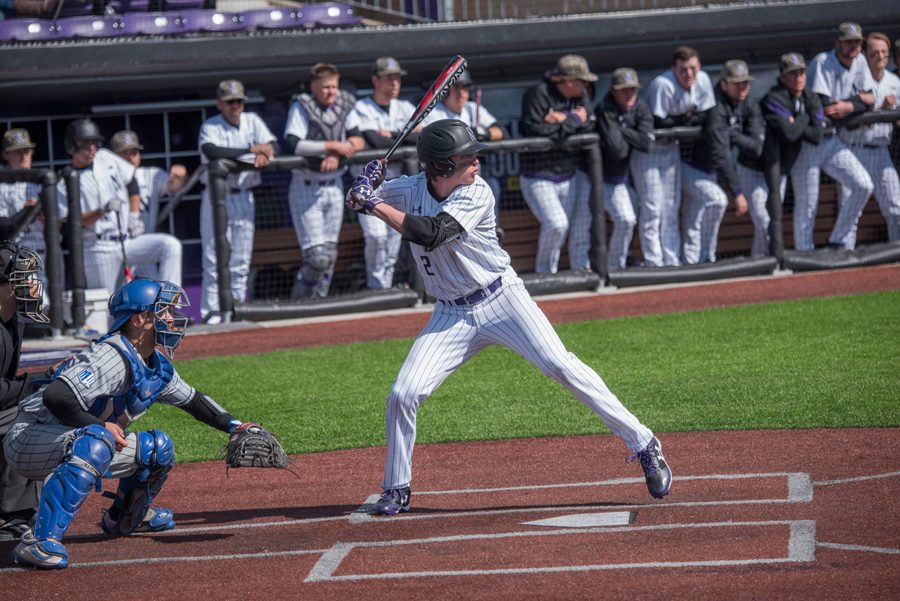 Jack Dunn prepares to hit the ball. The junior infielder hopes to lead the Wildcats to a series sweep of Nebraska (Omaha) this weekend.

Heading into the 2017 season, expectations for Northwestern were not very high. The team was coming off a season when it lost the most games in school history and had not made the conference tournament since 2010.

Now, following a season in which the Wildcats won 21 of their final 33 games and reached the Big Ten Tournament final for the first time since 1984, the expectations have been raised.

“Guys are expecting to win now,” assistant coach Josh Reynolds said. “They had fun winning, they saw winning was hard but also fun, so hopefully we can get on a roll and start the season in that fashion this year.”

Leading the starting rotation will be sophomore right-hander Hank Christie. The Oak Park, Illinois, native is coming off a season in which he won five games, pitched a team-high 83 innings and was named to the All-Big Ten Freshman Team. With former starters Cooper Wetherbee and Josh Davis graduating last June, Christie will now be the Friday night starter.

Junior Danny Katz and freshmen Ryan Bader and Quinn Lavelle will all start a game during this weekend’s opening series, Reynolds said. Sophomore left-hander Sam Lawrence will return to the bullpen where he had a solid freshman season, finishing with a team-leading 2.85 ERA and winning five games.

“A lot of the guys have gotten better and changed their roles a little bit, but once we get some games going we will have a better idea of what it is going to look like,” Reynolds said.

The only two everyday starters NU lost to graduation were outfielder/first baseman Matt Hopfner and outfielder Joe Hoscheit. Both hit in the middle of the Cats lineup and were the top two hitters on the team in batting average, on-base percentage, hits and runs.

Coach Spencer Allen said that the team has not shied away from addressing the question of replacing those two in the lineup. The third-year coach said that there is not one person they are looking at to replace Hopfner and Hoscheit, but instead hoping that the lineup as a whole can pick up the slack.

One player Allen said to look out for is sophomore outfielder Leo Kaplan. Kaplan hit .287 with a .491 slugging percentage and 41.9 extra-base hit percentage in 37 games, 22 of them starts, last spring.

Over the winter, former volunteer associate coach Tad Skelley left the program when the Toronto Blue Jays hired him as an amateur scout and video coordinator. Erro said that Skelley was a major reason for the infield’s success defensively.

“He was pivotal in getting us to where we were last season,” Erro said. “(The) coaching staff as a whole has done a great job of getting us ready, really making his absence feel not as bad as it should.”

NU opens its season Friday with a four game series against Nebraska-Omaha in Glendale, Arizona. The Mavericks are coming off of a 12-40 season in which they finished 3-21 in non-conference play. The team does have 15 new players on their roster, including eight freshman and seven junior college transfers.

The Cats are set to face six teams who played in a 2017 NCAA Regional, an achievement NU is hoping to accomplish for the first time since Baseball Hall of Famer Fred Lindstrom managed the Cats in 1957.

“We are expecting to play baseball in June and get into an NCAA Regional,” Erro said. “If the team succeeds and we are playing baseball in June, that is the biggest thing.”

Correction: A previous version of this story misstated the throwing hand of junior pitcher Danny Katz. Katz is a right-handed pitcher. The Daily regrets the error.