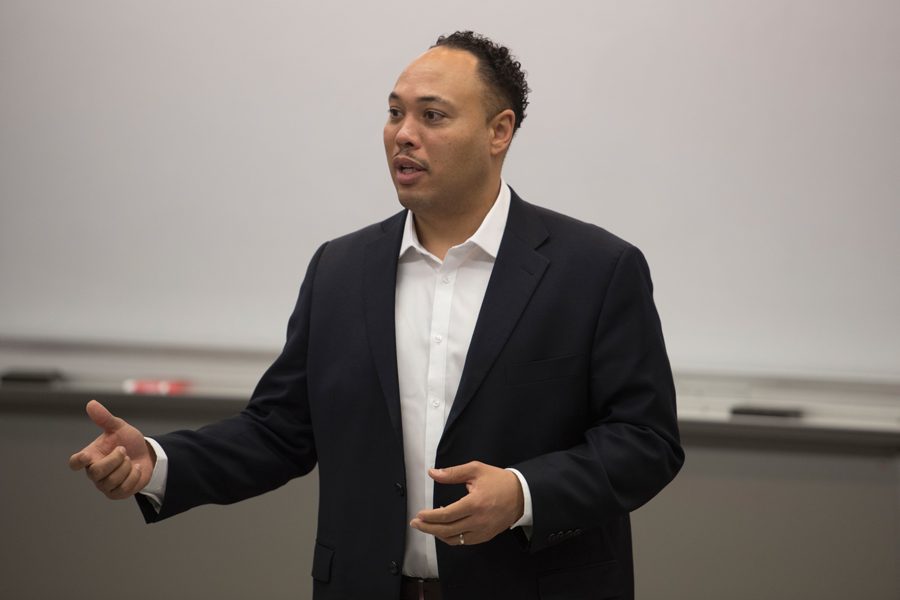 Ra Joy speaks at a town hall Tuesday. Joy, who is a candidate for lieutenant governor, discussed the need for reform in the Illinois government.

In Cook County and at the state level, he said, the Democratic Party is dysfunctional and “run by entrenched monopolists.”

“The only way to wrestle control from those folks who are leading our party is by getting more and more young people to tune in, to opt in and actively climb the ladder of civic engagement in Illinois,” Joy said at a town hall hosted by Northwestern College Democrats.

Joy, a Democrat running with gubernatorial candidate Chris Kennedy (Kellogg ’94), spoke to an audience of about 20 people. The student organization has also hosted town halls with candidates Daniel Biss and J.B. Pritzker (School of Law ’93), hoping to allow students to hear from the three main figures in the race for governor, said College Democrats president Alex Neumann.

“For a lot of students, me included, who are from out of state, there’s so much about Illinois politics and history that you just don’t know until you get immersed headfirst,” the Weinberg sophomore said. “So this is a good way for students to learn more and hopefully exercise their right to vote come March.”

Joy, who was born and raised in Evanston, previously worked as the executive director of CHANGE Illinois, a coalition working for government reform. He said Kennedy hopes to reform the Illinois state tax system, invest in education and change the “corrupt” election system.

Joy said elections can lead to decisions for the common good if candidates represent their parties’ interests. However, Joy said, they tend to represent party leaders first. The Democratic Party “breeds cowardice,” he added.

This is Joy’s first run for elected office. He decided to run for office after his 23-year-old son, Xavier Joy, was fatally shot last June, he told The Daily.

The current race is a “once-in-a-lifetime opportunity” to push for change in Illinois and the Democratic Party, he said.

Weinberg freshman and College Democrats member Shreyas Iyer said that because he lives in an area that leans toward Biss, he wanted to hear ideas from other candidates.

“He started talking about how the Willis Tower had certain property tax fees that were disproportionately affecting African Americans,” Iyer said. “I wouldn’t know about it from anybody else. But since his campaign has such a heavy emphasis on property tax, I feel like I learned a lot about that particular issue and how it relates to the underprivileged in Illinois and Chicago.”