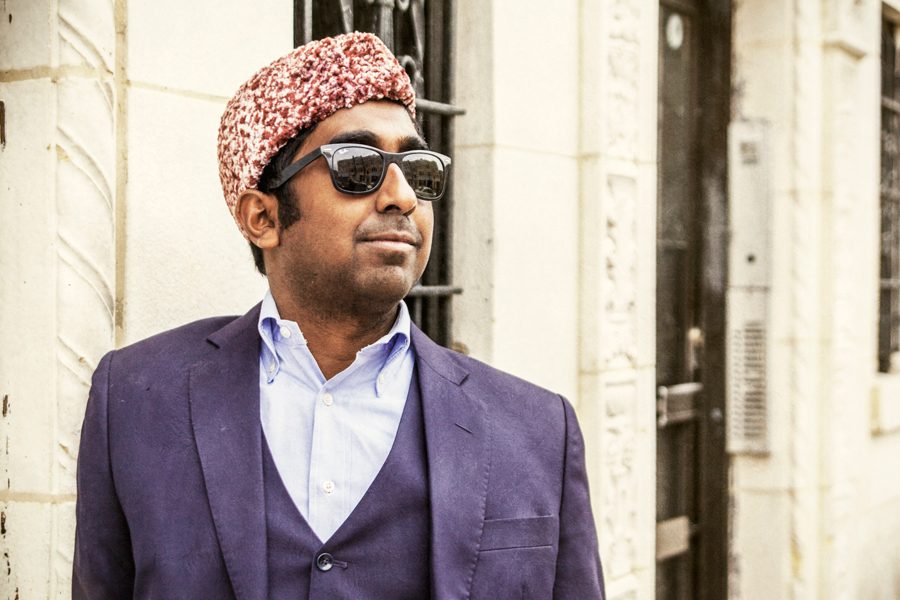 It’s no secret that the road to “making it” as a musician is not an easy one. Zeshan Bagewadi (Bienen ’09, ’11) had brief stints as an Uber driver, an auto mechanic and a drill press operator before releasing his first album “Vetted.”

His hard work paid off. The album “caught fire” after it was released in April 2017, moving into the Top 10 of Billboard’s World Music chart within a month.

“I had gotten so used to people not being interested in what I had to offer that it was like ‘Whoa, okay,’” Bagewadi said. “(The album) was a labor of love in every sense of the word.”

Growing up in a music-loving household that exposed him to genres ranging from Indo-Pakistani music to soul tunes, Bagewadi describes “Vetted” as the sum of his life experiences and influences.

Bagewadi studied opera and voice at Northwestern as an undergraduate and master’s student before realizing he longed for a different career — one that allowed him to draw from his personal experiences rather than playing a character.

“(I was) being asked to inhabit, for example … the character of a Spanish nobleman from the 15th century,” Bagewadi said. “Do I know what’s like to be a nobleman? Hell no. But I do know how to be Zeshan.”

Bienen Prof. Kurt Hansen said Bagewadi’s individuality played out in his performances even as an undergraduate. For example, Bagewadi’s senior recital was one of the “most unusual” recitals he had ever witnessed.

Hansen said he has been “so pleased” with the new direction of Bagewadi’s blossoming career and the breadth of music he is able to sing.

A self-proclaimed “soul music junkie,” Bagewadi said the 11-track album features several “lesser-known tunes” with his original spin, including a rendition of George Perkins’ 1970s hit “Cryin’ in the Streets,” which he performed on “The Late Show with Stephen Colbert.”

The album, he said, showcases his experiences as a Muslim and Indian American. Moved by the Black Lives Matter movement and the death of Sandra Bland — a friend of Bagewadi’s from high school — Bagewadi said he was compelled to use his music as a way to speak out on important matters.

“If you put out good music, no matter what it says, people are going to listen to it …why not preach to them?” Bagewadi said. “If you’ve gone through the things I’ve gone through, if you’ve seen the things that I’ve seen … you have responsibility to use that platform.”

Bienen Prof. Sunny Joy Langton said Bagewadi’s focus on using music as a platform was unsurprising, given his genuine passion for humanity. Langton, who taught Bagewadi when he was a master’s student, said his enthusiasm for life and for honing his craft is what sets him apart as an artist.

“(He) sings from his heart, right from the center of his soul,” Langton said. “You feel that everything he sings is the most real, honest, meaningful emotion you’ve ever heard.”

Although “Vetted” was released less than a year ago, Bagewadi said he is “already tired of it,” and has been dedicating most of his time to working on a new album, writing new music and collaborating with other artists across the country.

He hits the road next week for a month-long tour and has many other performances and festivals lined up in the future — including his debut performance at Lincoln Center in New York in May.

Bagewadi said he hopes listeners feel a deep sense of empathy listening to the album. In a society where apathy has become “so commonplace,” Bagewadi said he wants people to look beyond their own lives and feel others’ pain.

“Black people are being killed by the police in South Side (and) West Side Chicago but if you’re a student at Northwestern (it’s like) ‘Yeah, but I got class at Tech at 3 o’clock,’” Bagewadi said. “People get so caught up in their own lives that they’re not thinking about others.”

“If people feel that empathy, then I guess I’m doing my job right,” he said.