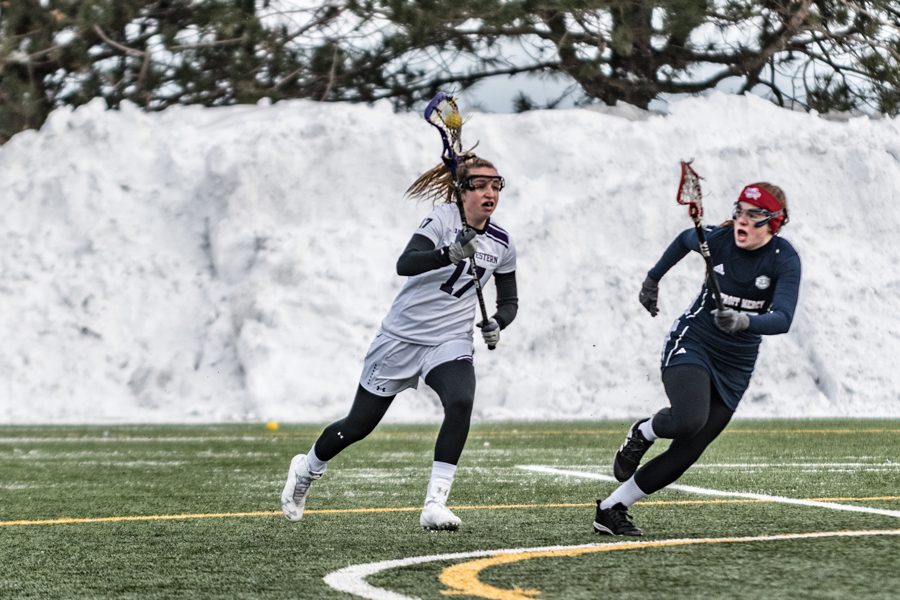 Taylor Pinzone cradles the ball. The freshman and the Wildcats cruised to two victories this weekend despite frigid conditions.

The opening weekend for Northwestern was a success with back-to-back wins against Canisius and Detroit Mercy.

Saturday morning was the season opener for the Wildcats and NU cruised to an 18-7 win over Canisius. Twelve women found the back of the net, including freshmen Kate Copeland, Jill Girardi and Taylor Pinzone scoring their first collegiate goals.

Sunday morning featured a domination of Detroit Mercy with a 21-2 victory. Once again, the hosts had effective play from throughout their deep lineup, with 13 different players scoring. Freshmen Ally Palermo, Lauren Gilbert and Brianna Stroup put their first career goals on the board.

Junior Selena Lasota, who became the fastest player in program history to reach 100 career goals in her sophomore year, missed the final 17 games of last season due to a lower-body injury. She scored a total of six goals this weekend, controlled seven draws and dished three assists.

Lasota said she being back on the field was “awesome” and praised the Cats’ freshmen.

“We have had a lot of strong classes and our senior class was an incoming class that played a lot their freshman year,” Lasota said. “We want to help build those freshmen up (and) give them a lot of confidence.”

NU showed no mercy to Detroit Mercy, with goalies Julie Krupnick and Mallory Weisse, who each played a half, only allowing two goals the entire game. Sunday’s game was the largest margin of victory for the Cats since a 2009 game against Rutgers.

Last year, NU lost to Stony Brook in the second round of the NCAA Tournament. This year, senior Danita Stroup said the team is aiming to go all the way in her final season with the Cats. She was the fourth-leading scorer for NU on the weekend, scoring five goals.

Danita Stroup said the Cats are working on improving communication and using the team’s depth.

“Our team goal is to make it to the final four and to the national championships,” Danita Stroup said. “And so working everyday and working together as a group to get to that point is kind of our main focus and my focus. … Hopefully we will succeed in the last break of the season.”

The weekend was marked with frigid temperatures and a snow-covered Martin Stadium prior to shovelling.

Coach Kelly Amonte Hiller said the Cats are excited for the season. She praised NU’s success in draw control with 19 draw wins on both Saturday and Sunday.

“We had a lot of contributions from a lot of different people, a lot of assisted goals which is good,” Amonte Hiller said. “We want to go all the way, that is our hope. That is our goal, and we just have to focus on one game at a time.”