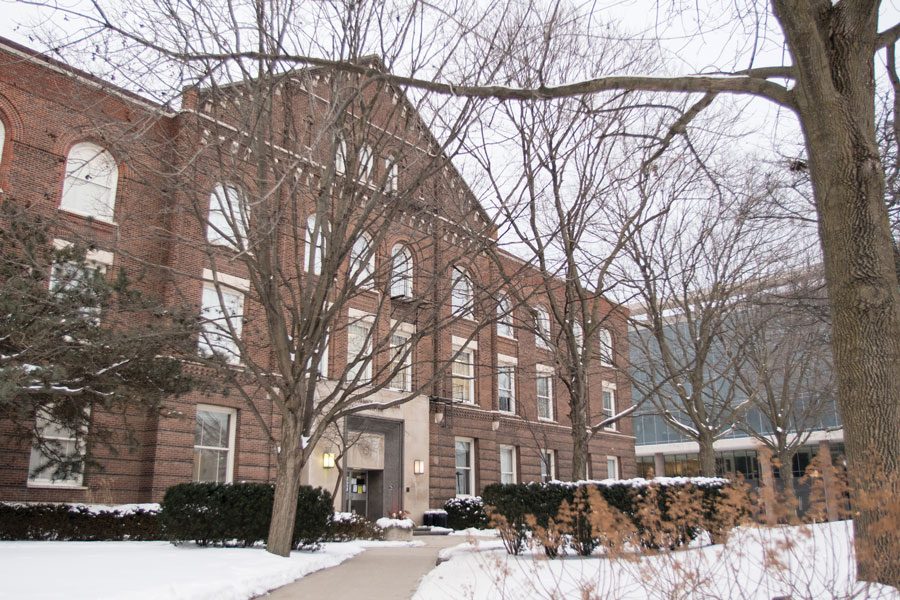 Fisk Hall, where the Medill School of Journalism, Marketing, Integrated Marketing Communication has offices and classrooms.

A group of Medill faculty members promised the 10 former students and employees who last week accused Prof. Alec Klein of harassment that they will “search for ways to help provide a safer, healthier environment free of any form of predation or bullying” in a letter last week.

In the letter, which was sent to media Monday morning, 15 tenured professors from the Medill School of Journalism, Media, Integrated Marketing Communications told the women their allegations shook many of them “to the core.” The allegations against Klein, they said, have sparked conversation and reflection among Medill faculty and staff.

“We respect you, and express our deep personal regret for any harm suffered,” the professors said in the letter. “We do hear you. We’ll continue to listen.”

Last Wednesday, the 10 former Medill students and employees sent a letter to Northwestern administrators accusing Klein, director of the Medill Justice Project, of sexual harassment, bullying and verbal abuse. In the letter, they described various situations in which Klein displayed “controlling, discriminatory, emotionally and verbally abusive behavior.” Klein “categorically” denied the allegations made against him in a Wednesday statement to The Daily.

In their response to the former students and employees, the Medill professors said that, as faculty members, they “clearly have plenty of urgent work to do.” They added that they are committed to make changes that “ensure no student or employee experiences abusive treatment, sexual misconduct, or discriminatory behavior.”

Medill Prof. Donna Leff, who mainly teaches graduate students, said the professors decided to write the letter after discussing the allegations made against Klein.

“We clearly and emphatically … want to say that we won’t tolerate this behavior among ourselves or our colleagues,” Leff said. “This is not any climate that we would tolerate at all. Not at all.”

Leff said the group of professors made the decision to write and send the letter fairly quickly and easily after having their conversation. Leff said several of the women who signed the original letter were former students of hers, and that the faculty wrote the letter directly to them because they “felt that they needed to hear from us.”

Medill Prof. Douglas Foster also signed the letter. The role of faculty, Foster told The Daily, is to ensure the “underlying problems of the culture” in Medill are being addressed. The goal of the women who wrote the letter “align” with the goals of the faculty, Foster said.

“(We’re) … determined to not just be shaken, but to be moved to participate in various ways to make the environment better,” Foster said. “We know that the former students on that list who were co-authors of that complaint, we know that they’re motivated the same thing we’re motivated by, which is to take what is a deeply disturbing circumstance, and use it to change the culture.”

Prof. Rachel Davis Mersey agreed with Foster, saying Medill is at the “very beginning” of thinking about the ramifications of the allegations made against Klein.

“Even just in my classes today, we began a conversation about power dynamics and the role of faculty and students in a classroom,” Mersey said. “I’m hoping that the level of conversation and attention to making our students feel comfortable … really becomes something that we put at the center of our conversation and our thoughts moving ahead.”

Medill Dean Brad Hamm could not be reached for comment. Meribah Knight, one of the writers of the original letter to Hamm and Provost Jonathan Holloway, declined to comment.