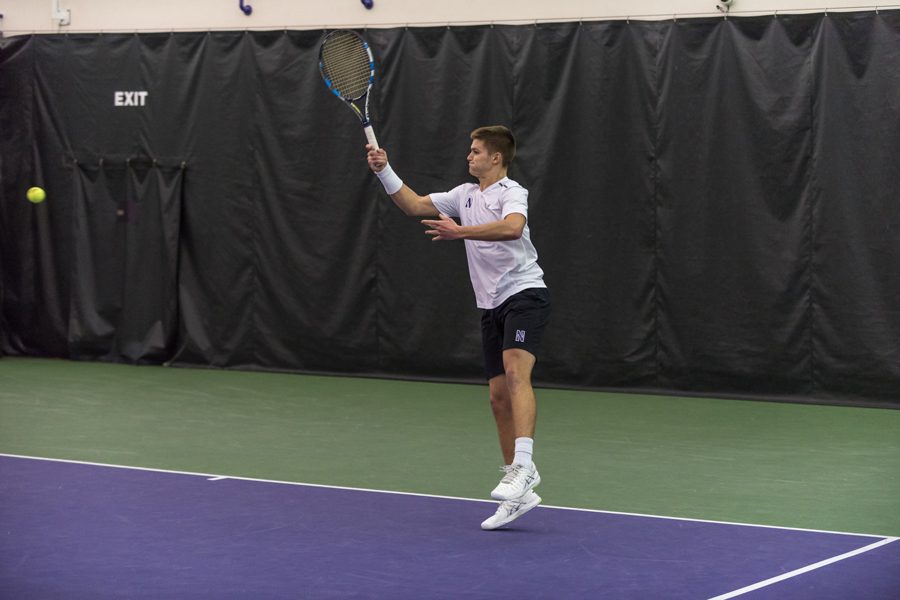 Michael Lorenzini strikes a forehand. The junior and the Wildcats went 1-2 on a busy weekend.

Northwestern cannot seem to get over the hump against ranked opponents, but continues to beat unranked foes.

NU has played a difficult schedule this season, with half of its eight matches coming against ranked opponents. The Cats are winless against those teams, but predictably are 3-1 against unranked opponents, with their only loss being a narrow 4-3 defeat to North Carolina State last month.

“The schedule is tough, but we’re a good team. I know that,” coach Arvid Swan said. “We’re growing, and we’re improving each match, so for us it’s about building with a young team and improving.”

Against the Cowboys, NU played its most competitive match against a ranked opponent this season. In doubles, the Cats played three close sets, but lost two of the three, handing Oklahoma State a one-point advantage.

In singles, NU’s deficit increased to 3-0 due to quick straight-set losses at No. 1 and 6 singles by freshman Antonioni Fasano and sophomore Chris Ephron, respectively. After those two, the rest of the singles matches were tightly contested and an unlikely sweep of them could have resulted in a win.

Wins from freshman Nick Brookes and junior Ben Vandixhorn brought the score to 3-2. However, sophomore Dominik Stary narrowly lost a second-set tiebreaker 9-7 to seal his team’s fate. Junior Jason Seidman was in the middle of a close third set when the match was clinched.

“It obviously wasn’t the result we wanted, but they’re a top-10 team, and we showed some good fight there,” Brookes said. “It gave us a little bit of confidence and motivation.”

Against Notre Dame, the Cats put in a strong performance in doubles, but lost five singles matches, often in close sets.
In doubles, Swan mixed up the pairings and gave the 0-3 duo of Brookes and Fasano new partners. The changes paid off, as the hosts won the doubles point against Notre Dame in what Swan said was the best doubles performance of the season.

Vandixhorn said he wished the team could have used the strong doubles performance to come out with wins in singles.

“We’ve got to come out with a little more energy and use the momentum of doubles,” Vandixhorn said. “A few times and on almost every court, when the sets got tight towards the end they were the team that stepped up and took advantage of it.”

Later that night, NU easily won its match against a shorthanded Chicago State team that had to forfeit one singles and doubles match due to a lack of players.

The Cats played their usual lineup and lost just one total set during the match against the Cougars. Quick singles wins by Vandixhorn and freshman A.J. Joshi ended the match, which lasted barely over an hour.