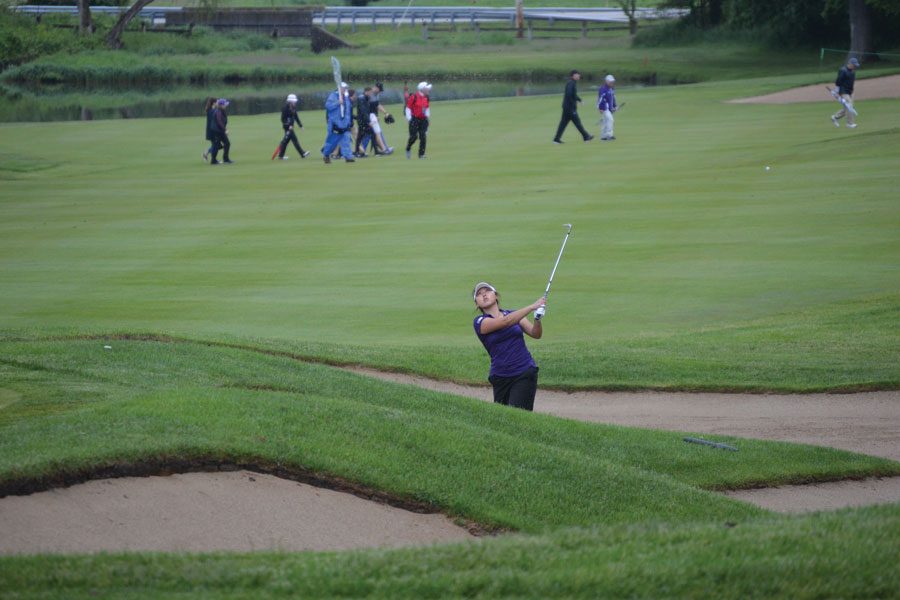 Sarah Cho skies a bunker shot. The senior leads an experienced Wildcats squad into the Northrop Grumman Challenge this weekend.

This spring, NU’s road back to NCAAs begins at the Northrop Grumman Challenge on Sunday in southern California, where the Cats will face a plethora of highly ranked opponents.

“It’s a great test,” coach Emily Fletcher said. “Knowing that it’s an elite field, it’s our desire to be the best and to do that we need to compete against the best. … For us, it doesn’t necessarily change the expectation”

The four semifinalists from last year’s National Championship — Arizona State, USC and Stanford, along with NU — are joined by No. 1 UCLA, No. 2 Duke and No. 3 Alabama in the 18-team field.

The Wildcats are led by seniors Hannah Kim and Sarah Cho. The duo has been to the NCAA Championships in all three years they’ve been golfing for the Cats, making it closer and closer to the title each season.

Kim, the two-time Big Ten Player of the Year, said she still works on new things in between every tournament in search of improvements.

“I’ve been working on a lot of mechanical stuff with my swing,” Kim said. “In terms of my putting, I think I’m just … focusing on my shoulders, creating more speed and trying to develop more power from the ground up.”

Juniors Stephanie Lau and Janet Mao also return from last year’s national runner-up lineup. The duo each had up-and-down fall seasons. Mao, for example, took fifth in the opening tournament of the year but fell to 39th at home in the Windy City Collegiate.

The only new golfer who has been a fixture in the NU lineup is sophomore Brooke Riley. Riley struggled in her first two collegiate events, but has since eased her way into a starting spot after sitting out most events her freshman year.

“It’s been awesome,” Riley said. “I actually expected it to feel a little different than it did, but it’s been kind of natural because it’s been a long time coming… It’s been a good fit.”

Of course, the Cats face a unique challenge in the winter that many of the other top teams do not have to deal with — cold and snow.

NU practices indoors during this three-month-long break, making use of indoor facilities to focus on what it can.

“We’ve done a lot of short game and wedge work, just trying to tidy things up,” Fletcher said. “Everybody’s had certain things they’re trying to get better at and areas where we can improve… I’m looking forward to getting outside and getting that first event of the winter under our belt, and the girls are anxious to compete.”