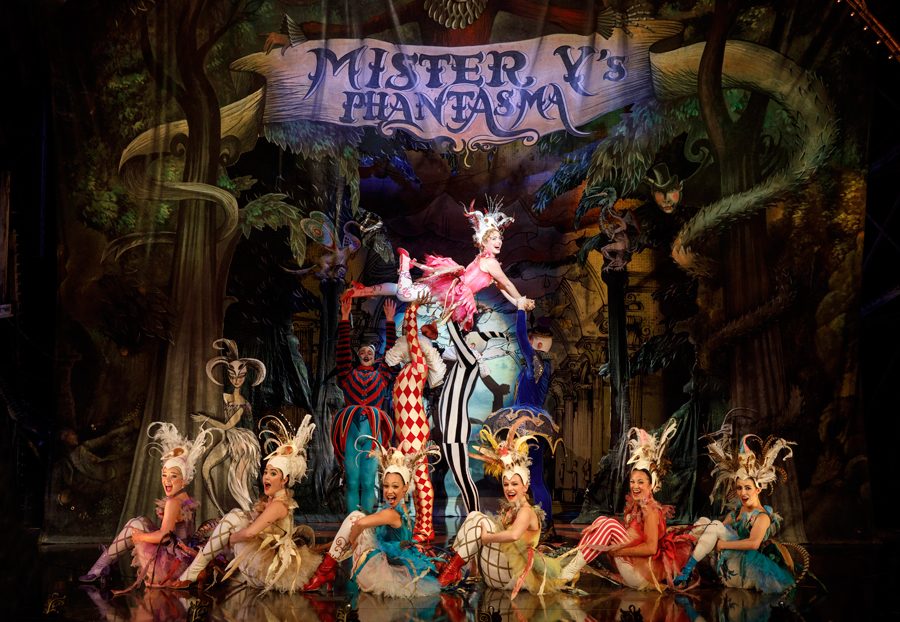 The cast of the national tour of “Love Never Dies.” The stand-alone sequel to “The Phantom of the Opera” picks up the story ten years later in a new setting: Coney Island.

The two Northwestern alumni will return to the area this Wednesday for the show’s Chicago debut, playing at the Cadillac Palace Theatre from Feb. 14 through March 4.

Fresh out of college and working day jobs while “auditioning like crazy” in New York, Giannetti (Bienen ’16) said she woke up at 5 a.m. the morning of an open call to throw her hat in the ring.

Gillis (Bienen ’99)— who previously covered Raoul and 13 other male roles in “The Phantom of the Opera” — had been out of the professional theater industry for the last 10 years due to an eye injury. He recently made the decision to return to the stage and flew from Chicago to New York to attend auditions, he said.

About eight callbacks later, both were offered their roles: Giannetti as a Swing and Christine’s understudy, and Gillis as an ensemble member and the Phantom and Raoul’s understudy.

“Love Never Dies” picks up roughly 10 years after the end of “The Phantom of the Opera.” The setting is no longer the Paris Opera’s Palais Garnier, but rather Coney Island, where the Phantom has established a new life for himself, according to a news release.

Giannetti, who grew up listening to the original “Phantom of the Opera,” said the sequel is a “completely different world” that draws inspiration from the original. “Love Never Dies,” she said, has a similar creative structure and references exact quotes from the original show.

“It’s really cool to see a sequel that can stand on its own but also have elements of the first one as well,” Giannetti said. “(It’s) an amazing ending to this epic love story.”

Bienen Prof. Pamela Hinchman, Giannetti’s former voice teacher and mentor, recalls Giannetti as one of her “most gifted students,” noting her versatility as a vocalist and possession of a natural stage presence. Hinchman said she was thrilled when she learned Giannetti landed the understudy role for Christine and believes it is the beginning of a future of success.

“She’s just this optimistic person,” Hinchman said. “If somebody says, ‘Oh my gosh, this character needs to have darker hair,’ she’ll go out and dye her hair darker for the audition. She does everything she can to make it work. … You just want her dreams to come true.”

Gillis said the show allows for significantly more character development than “The Phantom of the Opera.” Since the musical is set roughly a decade later, the characters are older and posed with challenges that incorporate more adult themes, he said.

Gillis said his favorite part of the show is its music, which he said encapsulates “all the emotions you could possibly imagine from music.” In addition to the score, Gillis said the show itself holds powerful messages that will resonate across audiences.

“This show has a lot of wonderful sentiments within the lyrics of ways to live life and ways to treat people and words of wisdom to live by,” Gillis said. “If you love ‘(The) Phantom of the Opera’ … you’re going to love this show.”