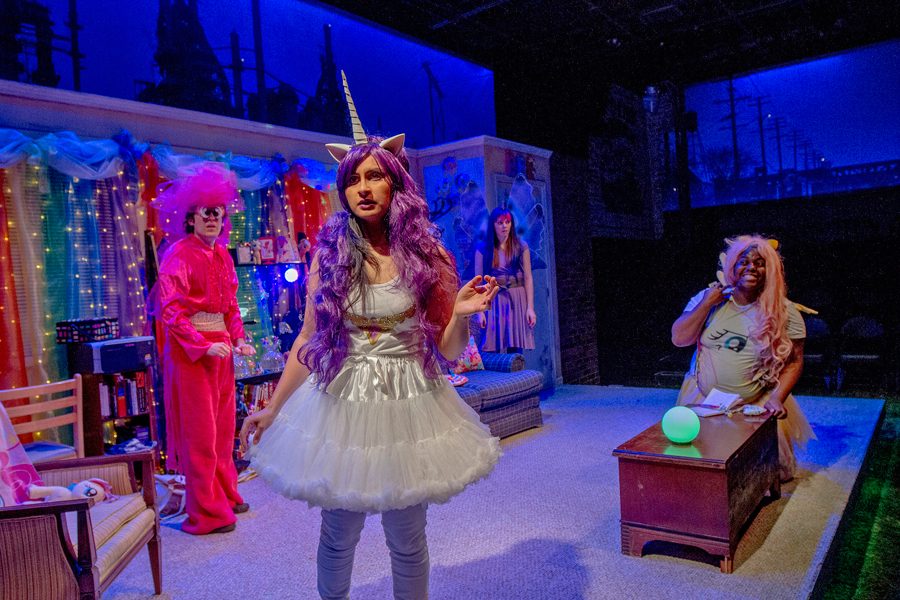 “The Antelope Party” features a group of bronies living in rural Pennsylvania who trade their love of My Little Pony for fascist neighborhood politics.

Jeremy Wechsler (Communication ’90) was seeking a script that looked at the current political landscape from an “off-kilter” perspective. But “off-kilter” doesn’t even begin to describe “The Antelope Party,” a colorful and at times eerie journey into an impressionable My Little Pony fan club.

Eric John Meyer’s “The Antelope Party” tells the story of a group of well-meaning ‘bronies’ — adult fans of My Little Pony — who get wrapped up in a dangerous neighborhood watch group with a political agenda.

“It’s a terrifically weird and original look at the election,” Weschler said. “If you look around the country, I think it is extremely unlikely that you will find as offbeat and insightful a play written about these social pressures as this one.”

Wechsler is the artistic director at Theater Wit, a theater company in Chicago that aims to produce plays that are both humorous and argumentative, he said. “The Antelope Party” exemplifies this style of theater: the script and scenery employ comedic measures to emphasize serious social and political pressures.

“The world the bronies have created at the beginning is so delightful and hilarious that I think the audience feels actual emotional pain as it recedes,” Wechsler said. “I think it’s a difficult thing for (the audience) to negotiate, as the space that they’re in becomes less and less safe.”

Wechsler said while some of the audience members have viewed “The Antelope Party” as an allegory for the rise of Nazism in Germany, the play is meant to explore an ideological phenomenon closer to home.

Playwright Eric John Meyer said he started writing “The Antelope Party” during the presidential primaries in 2016.

“When I saw the violent footage of Trump’s rallies, and watched as people who once considered him a joke start twisting themselves into knots in order to rationalize supporting him (or not not supporting him), I decided to use fandom and cosplay as a lens for examining the dangerous nationalism that was spreading,” Meyer said in an email to The Daily.

Annie Munch (Communication ’12), who plays one of the bronies, said the marginalized position of the subculture also makes the characters vulnerable to the fascist ethos of the neighborhood watch group.

Most of the play is set in Ben’s — one of the bronies — apartment in rural Pennsylvania, where a small group of My Little Pony fans meet to discuss their love for the show and its subculture.

The apartment is a “My Little Pony wonderland” that acts as a haven from the outside world, Wechsler said. The creative team added painstaking details to the space — such as a shelf of Beyoncé themed Ponies that combine Ben’s two favorite fandoms — to elicit delight from the audience, Wechsler said. He noted this delight is replaced with unease by the final act.

As the plot develops, the scenery reflects the shift in the characters’ ideals, Wechsler said. Some of the characters shed their colorful cosplay outfits, and details like propaganda for the sinister neighborhood watch group appear on the set after intermission, he said.

“Slowly, the movement of the design is going to move us from Equestria into the real world, in a slow and subtle fashion so we do not know it is happening,” Wechsler said. “And by the end, we’re like ‘Oh my god, here we are.’”

Wechsler, Meyer and Munch all said the audience is visibly affected by the ideological exploitation of the bronies. They said as the characters get sucked into the neighborhood watch group, audience members have physically flinched and even yelled.

But Wechsler said “The Antelope Party” is ultimately a show about understanding rather than panic. He said he hopes the play can delve into the emotional and social reasons why people voted for President Donald Trump in the 2016 election.

“In some ways, the theater is always about trying to create a window of grace where we can see someone else’s position,” Wechsler said. “If you understand in ‘The Antelope Party’ why the bronies change the way they do, you understand a lot more than I did going into this about the Trump voter.”