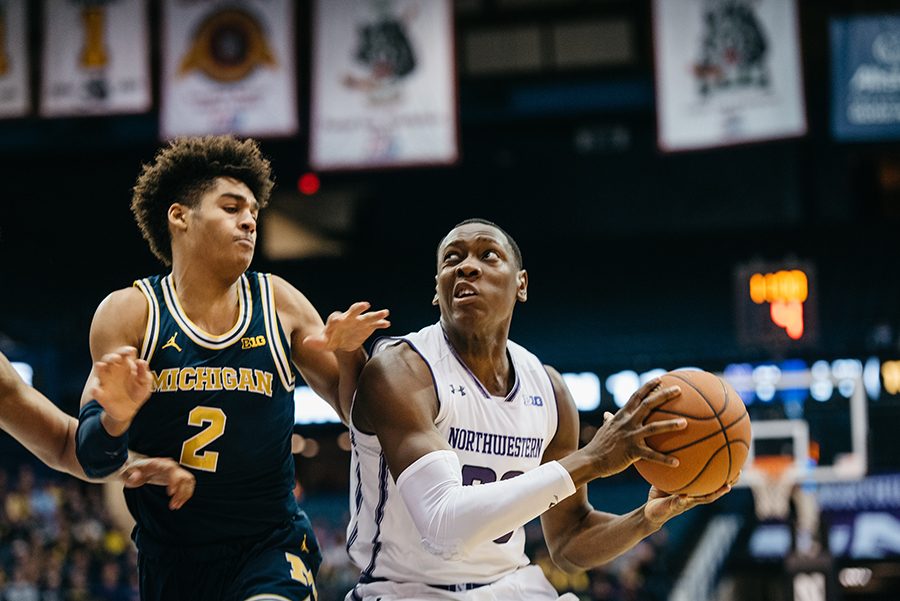 Scottie Lindsey goes up for a shot against Michigan's Jordan Poole. Lindsey found his scoring touch in the first half of the Wildcats' home game Tuesday.

ROSEMONT — At long last, Northwestern has a premier win to hang its hat on.

Riding explosive performances by senior guards Bryant McIntosh and Scottie Lindsey and lockdown second-half defense, the Wildcats (15-10, 6-6 Big Ten) pounded out a 61-52 victory over No. 20 Michigan (19-7, 8-5) on Tuesday at Allstate Arena.

NU started very poorly, missing its first six field goal attempts and falling down 10-1 early. A rare jumper by junior center Dererk Pardon, however, jumpstarted the Cats’ offense and helped them keep the game competitive for the remainder of the first half. Lindsey drained a 3-pointer in the waning seconds of the frame to pull the hosts within 32-29 at the break.

Then in the second half, NU turned the tables on Michigan, this time erupting on their own 10-1 run out of the locker room to take the lead.

The Wolverines weren’t able to stage their own comeback because of an incredible nine-minute field goal drought, and by the time McIntosh drained a floater in the lane to put the hosts up double-digits with under four minutes to play, the Cats had seemingly taken control.

Michigan fought back somewhat, with leading scorer Mo Wagner drawing an and-one with two minutes left to cut the deficit to 56-52, but several much-needed stops at the end preserved the victory for the hosts..

1. NU gets the ranked win it’s long sought. Coach Chris Collins has been harping for weeks about his team’s improvement, but we saw the best evidence of yet in Tuesday’s second half. The Cats found for rebounds, created open looks on the offensive end, played with fire and determination and scrapped out their first victory over a ranked opponent this season. And McIntosh, the quarterback of all the team’s success last year, put together a vintage take-over-the-game performance at long last.

2. Lindsey may be finding his shooting touch. The senior guard has had more than his share of ghastly outings this season, but he’s currently riding his most consistent stretch of the winter, scoring 13 or more points in six consecutive games. Tuesday, he went 4-of-6 from downtown and made a number of timely shots throughout the first 30 minutes of action before letting McIntosh handle things down the stretch.

3. NU’s postseason chances have a glimmer of hope. With this victory, the Cats are back to .500 in conference play. That makes them theoretically in the NCAA Tournament conversation despite the Big Ten’s relative weakness this year, although they’d still need to go 5-1 or so down the stretch to get into serious contention. On the other hand, NU’s likelihood of at least qualifying for the NIT is now substantial.