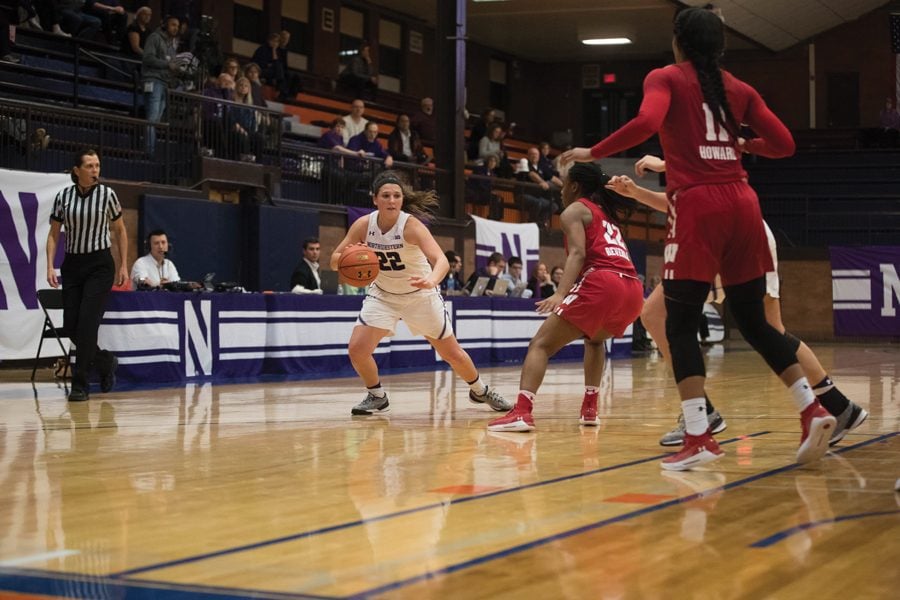 Byrdy Galernik dribbles the basketball. The sophomore guard hit a 3-pointer with 12 seconds left to tie the game at 69.

Northwestern’s bench couldn’t contain itself as the Wildcats culminated one of their biggest runs of the season.

Facing a 16-point deficit, they held Indiana without a field goal during the last five minutes of regulation, and when sophomore guard Byrdy Galernik hit a 3-pointer to tie the game at 69 with 12 seconds to go, they all spilled onto the court.

Freshman guard Jordan Hamilton, coach Joe McKeown and even senior guard Lydia Rohde, who has been on crutches since January, were jumping around near the sideline when Galernik forced their first overtime game of the season. But what originally looked like NU’s biggest comeback of year fell apart in a 78-73 overtime loss to Indiana.

“I thought defensively, we were a step slow,” McKeown said. “The biggest thing is just getting some consistency because it takes a toll on your defense when you can’t score.”

Five perfect minutes brought the Cats (9-15, 2-8 Big Ten) back into the game. Indiana (12-12, 5-6) didn’t make a field goal and NU didn’t miss from the field to overcome a 67-51 deficit. Freshman guard Lindsey Pulliam led the Cats with 12 points in the fourth quarter, including a contested pull-up jumper to cut the deficit to three with just over a minute to go.

On the defensive end, they forced two turnovers in the last 30 seconds of regulation by Hoosiers guard Tyra Buss, who finished with 31 points. Sophomore forward Abi Scheid’s steal on Buss, Indiana’s all-time leading scorer, set up Galernik for a shot she described as one of the biggest she’s seen this season.

“I tried not to get too excited,” Galernik said. “We still had a little bit of time left.”

But what NU did perfectly to engineer its 16-point comeback fell apart in overtime. Even though Indiana made only one field goal in the extra period, the Hoosiers went 7-for-8 from the free throw line and had five more rebounds than the Cats in the last five minutes.

Galernik had another chance to tie the game with 12 seconds to go from the same spot on the floor in overtime, but her off-balance attempt hit the side of the rim to seal the result.

Galernik, who made three of her four shots in regulation, was held scoreless on three attempts in overtime. Playing in a bigger role after Hamilton fouled out in the fourth quarter, her perimeter shooting took pressure off Pulliam, who finished with a career-high 33 points but fought for each shot attempt.

“They made it hard for (Pulliam) to get touches,” McKeown said. “But we just started to make a couple shots, play great defense and rebound the basketball and were able to run a little bit.”

But the leading freshman scorer in the Big Ten was held to two points in the extra period and missed a layup with 48 seconds to go that could have cut NU’s deficit to one.

Galernik said the young team, which was losing 20-8 at the end of the first quarter, has to maintain its effort for the entire game, even when it faces a large deficit or foul trouble.

“We used everything in the tank to tie it, and I don’t know if we had anything left over for overtime,” she said. “We’ve just got to start off stronger so we don’t have to play catch-up.”