Women’s Tennis: Northwestern looks to rebound against No. 11 Texas 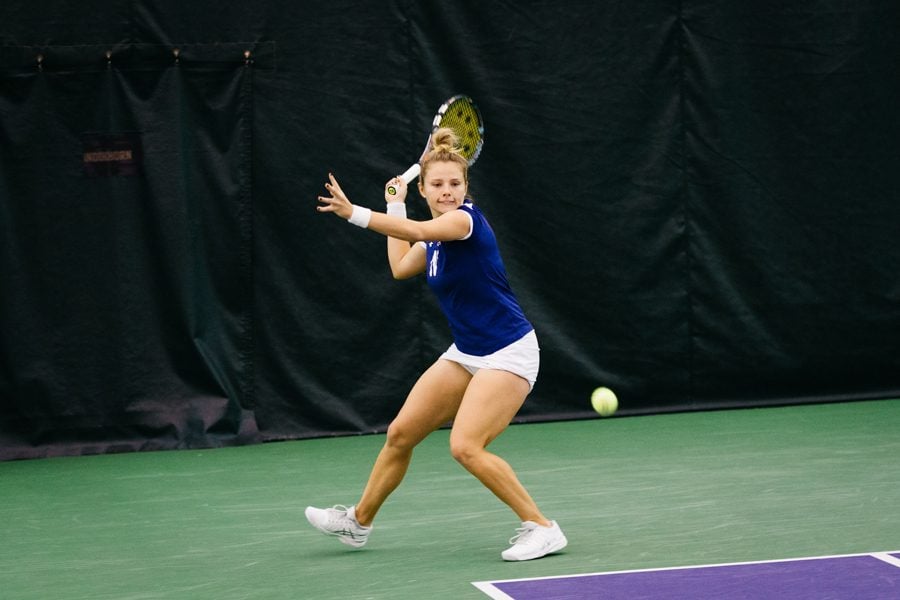 Caroline Pozo prepares to strike a backhand. The freshman and the Wildcats take on No. 11 Texas on Sunday in a battle of ranked teams.

Northwestern will face its third ranked opponent in as many matches when it faces off against No. 11 Texas in Evanston on Sunday.

The No. 23 Wildcats (3-1), after defeating No. 21 Kentucky and falling to No. 16 UCLA, will now turn their attention to a Longhorns team that is red-hot. Texas (4-0) recently knocked off No. 11 California and punched its ticket to the ITA National Team Indoor Championships.

“We’ve sort of used the analogy of college football,” coach Claire Pollard said. “You’ve got to show up every week in college football. You take one loss, maybe you get in the playoffs, maybe you don’t. We’re taking on that approach, and Texas is not any easier than UCLA was.”

The Longhorns feature three singles players ranked in the top 100, including No. 10 Bianca Turati. However, NU will look to continue to excel in doubles — an area it has been dominant in since the start of the year.

The Cats have yet to drop a doubles point in the young season, and boast two of the top 10 doubles pairings in the nation. The pairs of seniors Maddie Lipp and Erin Larner, and senior Alex Chatt and junior Lee Or are likely to trouble a Texas team that has no top-60 doubles teams.

“We’re just trying to go out there and be on top of them and be aggressive and control the match,” Or said. “It doesn’t really matter who we’re going to play, we’re just going to work hard and do the best we can do.”

NU will also continue to rely on Lipp, who remains undefeated in both singles and doubles on the year.

The senior, a member of the fourth-ranked doubles pair in the country and No. 92 in singles, was recently named Big Ten Athlete of the Week after multiple wins over ranked opponents in last weekend’s matches. It’s the fourth time she’s received that honor in her career.

“If I’m doing as well as I can individually, it’s helping the team overall,” Lipp said. “Obviously I’d rather have the team win over me getting that, but I guess it just means I’m doing well for the team, which is good.”

The Cats will need their experienced group to step up on the singles end Sunday if they want to walk out of the match with a win. Against the Bruins, they dropped four out of six singles matches, including a heartbreaking third-set loss at the No. 6 spot to seal the defeat.

NU, though, seems poised to learn from the UCLA loss, and Pollard believes the experience could lead to success down the road.

“We’ve got to take a lot away from the match because there were way more positives than minuses,” Pollard said. “We’ve got to remember that even though we were disappointed we didn’t get the ‘W.’ It’s easy to play one great match, but can you do it week in week out?”