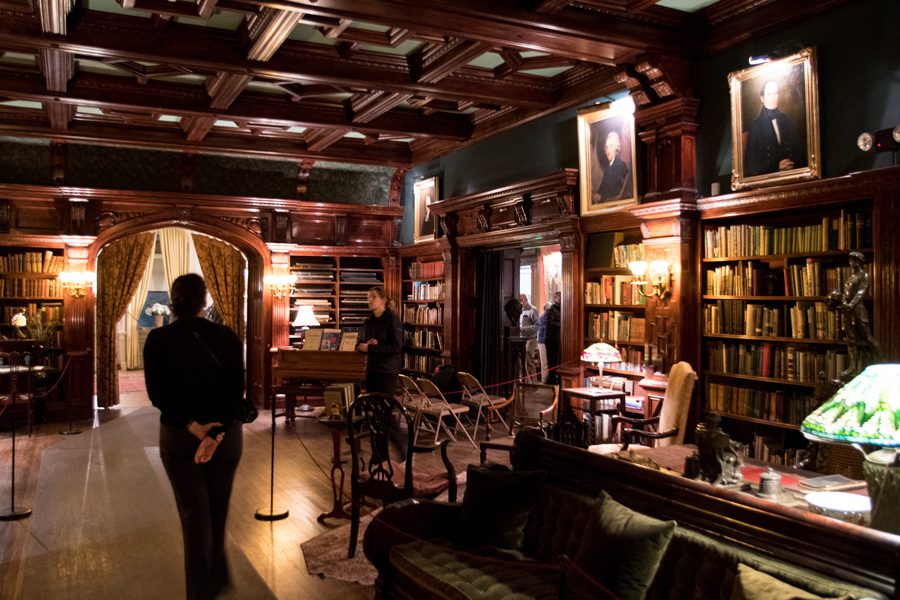 An 1893 Steinway Piano on display at the Dawes House. The Evanston History Center opens its newest exhibit Friday.

“Listen Up!,” an exhibit on the history of audio technology, opens Friday at the Evanston History Center’s Dawes House.

The exhibit features antique music boxes, phonographs and early versions of records, among other artifacts. All items in the exhibit come from the history center’s collection of donated materials.

The exhibit features both pieces collected from Evanson homes and businesses, and technology created in Chicago. Zenith Radios has a particularly prominent piece on display in the exhibit.

The center’s director of facilities, visitor services and collections, Kris Hartzell, recounted the story of two young men — Karl Hassel and Ralph Mathews — who started building these radios in a garage in Chicago upon their return from World War I.

The two were part of a larger group of young people who have contributed significantly to technological advances in sound, Hartzell said.

“An interesting aspect for me is the parallel between the growth of technology from historic times to present,” Hartzell said. “Most (innovations) just started out with a few young people.”

One additional display in the exhibit shows the progression of the record, from when it was originally cylindric instead of flat. These original brown wax cylinders used to be made out of black wax, and were later flattened into the disk shape, Hartzell said. The records only printed with grooves on one side, she added.

Hartzell also said the exhibit emphasizes how telephones and radio changed the way people communicated and affected social change. She added that sound technology has significant effects on communication and culture.

“Once you could record sound, it became a commodity, and you could use it to change a culture,” Hartzell said.

Dawes House docent Sue Moss said Charles Dawes, a former Vice President of the United States and resident of the Dawes House from 1909 to 1951, communicated through sound himself, particularly with his 1893 Steinway Piano that is now on display.

“(Dawes) would come home from work to play the piano to relax before dinner,” Moss said. “But if he started to play the first act of ‘Madame Butterfly,’ it was a sign that he was getting hungry for dinner.”

When visiting the audio technology exhibit, guests are encouraged to take a tour of the house as well, Moss said.

Caelan Mys, a visitor to the Dawes House, called the interior decoration “exquisite.” Her father, Carl Mys, said he was impressed by Dawes’ prestigious friends who visited the the family at their lakeside mansion.

Hartzell said the theme is a big change from the last exhibit that costume curator Janet Messmer organized, which was on accessories, and included hats, jewelry, scarves and more.

“We try to have something for everyone,” Hartzell said.

A previous version of this article incorrectly identified the curator of an accessories exhibit. Janet Messmer was the curator. The Daily regrets the error.