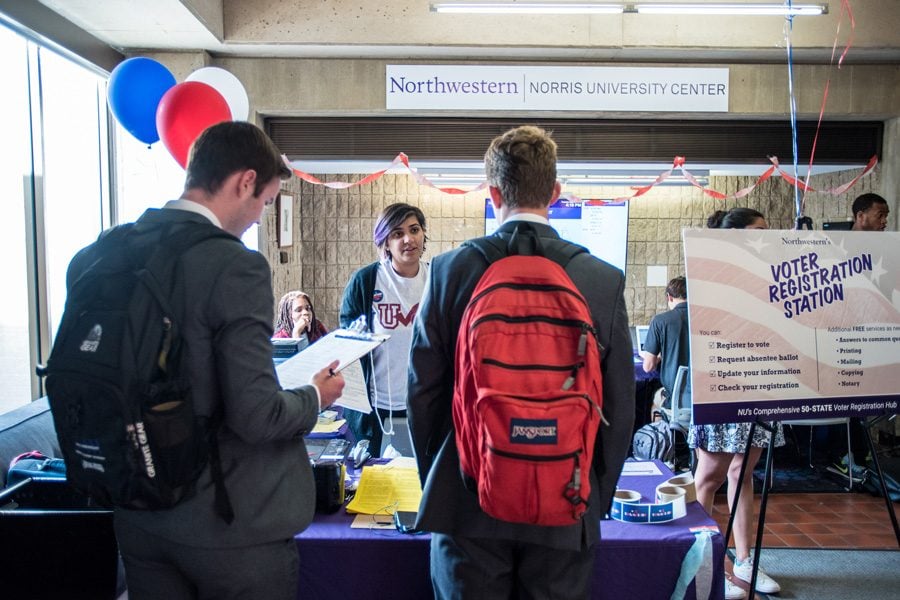 Student voting turnout and registration increased significantly at Northwestern compared to other universities over a four-year period, according to a national study of student voting habits.

The National Study of Learning, Voting, and Engagement data showed Northwestern had an increase of more than 15 percent in voting turnout from 2012 to 2016. Nationally, the average increase during that same period was about 3 percent.

Rob Donahue, associate director of the Center for Civic Engagement, told The Daily he attributed much of that increase to NU Votes — a CCE initiative that encourages voter engagement.

Also, 91 percent of eligible voters were registered at Northwestern in 2016, compared to just over 70 percent at other universities. This September, the eligible student registration exceeded 96 percent, according to NU Votes.

Northwestern was still above the national average when it comes to actually going to the polls, with 64 percent of eligible students voting compared to 50 percent elsewhere.

Donahue told The Daily the typical narrative is that young people don’t vote. However, he said they simply haven’t built up the habit yet, and when they do get involved it will “reinvigorate our democracy.”

“Now is a particularly pivotal time for the youth electorate to think about the impact they stand to make if they start paying attention in not just presidential, but also in midterm (elections),” Donahue said.

With this increased involvement, Northwestern is one of nine top universities for voter engagement out of over 1,000 studied, according to an Institute for Democracy and Higher Education at Tufts University report using the NSLVE data.

On Oct. 19, the University was recognized for its voter registration efforts when it received five awards from the ALL IN Campus Democracy Challenge, a national challenge to colleges to promote civic engagement.

“(During Wildcat Welcome,) we are there when all of the students are checking into their dorms,” the Communication senior said. “And one of the steps in their check-in process for them is to register to vote, or they’re given the option to register to vote when they go into that first room.”

Schmelzer said each state has a different registration and absentee ballot process, but NU Votes can help make those options available to every eligible student.

Donahue said NU Votes also has some online resources for states that offer online registration, but there may be different requirements by state, so it’s better to visit NU Votes in person.

“Colleges are civic institutions, and they do have a role in teaching young people … how to participate in democracy,” Donahue said. “It has to be, it should be and it is at Northwestern a nonpartisan effort. I don’t care who you vote for. We’re not here to say where you should vote or how you should vote. But we’re just here to encourage people to participate and to make sure they know how to do it.”

This fall, Donahue said Northwestern will participate in the Big Ten Voting Challenge in the Big Ten Conference to see which schools have the most registered and voting students during the midterm elections. He said he thinks students will increase turnout this year, although average midterm turnout is around 20 percent at Northwestern.

“If people really care about their student loan debt, the interest rates on their student loans, how well the economy is doing, what kind of jobs are out there,” Donahue said, “not to mention any other host of social issues that I know are important to different folks in the NU community and the future of things, then they really need to participate in our democracy.”