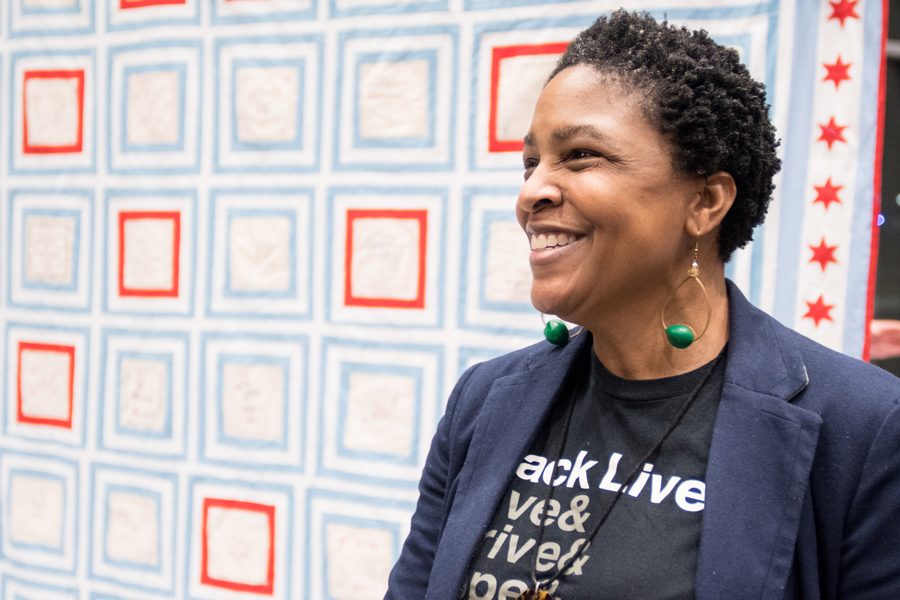 Held at the Segal Visitors Center with over 100 in attendance, the event also featured Blount’s “Black Lives Matter Witness Quilt,” a project that engaged community members to highlight the pervasiveness of interpersonal violence — violence against spouses, partners or family members — and its connection to institutionalized state violence.

“The enormity of the loss of these lives that go unrecognized … really hit me,” Blount told The Daily. “People see the statistics, but don’t really personalize or connect with the loss.”

Following a reception at the Block Museum of Art, Blount spoke about her art at the visitors center, where community members engaged in discussion and stitched patches themselves, which when completed, will eventually be stitched together to create a new quilt. Many participants embroidered the words “Say Her Name” to commemorate the lives of women lost to violence.

Blount said she hopes her work will further the interests of the Black Lives Matter movement, which she said experiences polarization and misrepresentation, especially through the media. Trauma caused by white supremacy exists not only nationally, Blount said, but within Evanston as well.

Although originally from Detroit, Blount said she also sees similar issues of inequity in Evanston. But, she said, Evanston residents are willing to discuss issues affecting the community and take action against inequity.

Melissa Blount said her husband, Ben Blount, inspired her to make the quilt after she was unsure how to begin.

After her husband, an artist focused on design and printing, completed a project that documents the lives of black men and boys, she said she realized that she could do the same for black women and girls.

Ben Blount said though her quilt is a piece of art, its main purpose is fostering conversation and building community.

“The quilt is beautiful in itself, but it’s the idea that over a hundred people came together to work on it and sit together and have conversations about it,” he said. “Art as an impetus to action is the unifying element between our artwork.”

“What struck me about this event is how many community members showed up,” Ashmun said. “I think this event has been a really nice way for people to gather and not only appreciate the quilt project, but to also contribute to a new one.”