Rauner’s State of the State address: ‘Time we do what the people of Illinois want’ 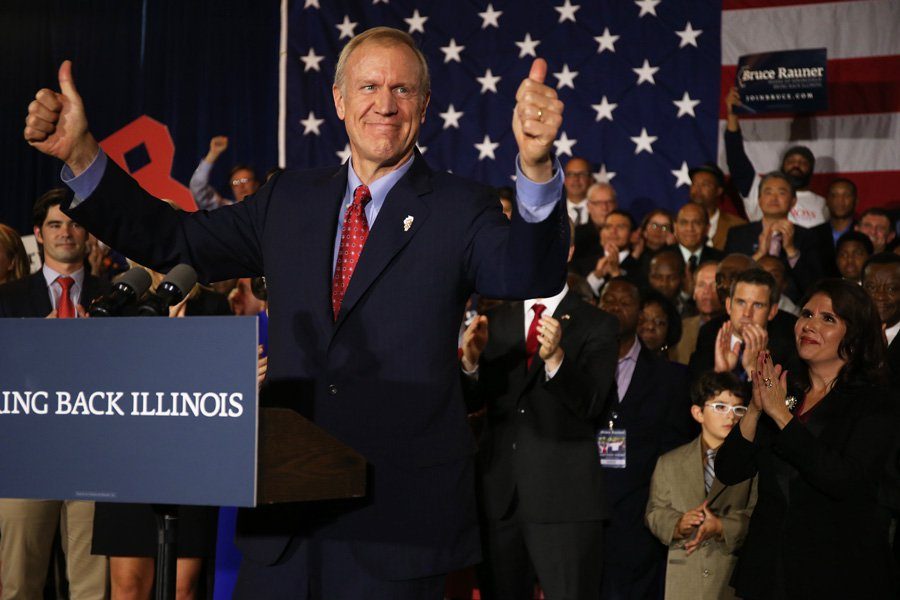 Gov. Bruce Rauner declares victory on election night in 2014. Rauner delivered his State of the State speech on Wednesday.

Gov. Bruce Rauner called for term limits on state politicians, encouraged property tax reform and challenged Illinois residents to unite to promote job growth in his State of the State address on Wednesday.

In the address, held in Springfield, Rauner also promised assembled lawmakers that he would present a balanced budget proposal to them next month, a commitment that brought a cheering crowd on both sides of the aisle to its feet. He said the proposal would offer a path to reduce spending and lower taxes.

“No one” is happy with the property tax assessment system in Illinois, he added. The governor asked lawmakers in attendance to pass legislation that brings “true property tax relief” to state residents and give them the ability to lower their taxes through a voter referendum.

Rauner also emphasized that about 80 percent of Illinois voters want to see term limits, joking that the other 20 percent were sitting in the chambers and in elected Illinois courts. He said term limits would help regain the public’s trust in the government.

“It is past time to make this good governance move,” Rauner said. “Put term limits on the ballot and let the people decide.”

Biss challenged Rauner’s calls for bipartisanship in a news release, saying that the governor has spent his time in office blaming Democrats for his failures rather than taking responsibility for his actions. He said Rauner has taken advantage of the very property tax system he criticized, and that Rauner blames others for perpetuating it.

“Bruce Rauner is a failed governor, and we can’t afford to give him and his right wing agenda another chance,” Biss said in the release. “But we also know it’s not enough to just beat Bruce Rauner, because our state’s problems began long before he was elected to office.”

Pritzker echoed Biss’s sentiments in a news release, also saying Rauner was a “failed governor,” and calling the Republican out on his “fatal mismanagement” of the Quincy Veterans’ Home crisis.

The businessman said even though the governor promised to deliver a balanced budget next month, he has failed to deliver one for the last three years.

“After three years of crisis, broken promises and statewide damage, Bruce Rauner failed to tell you the real state of the state,” Pritzker said in the release. “Bruce Rauner is right about one thing — we need to come together as a state, but not to pass his failed agenda.”