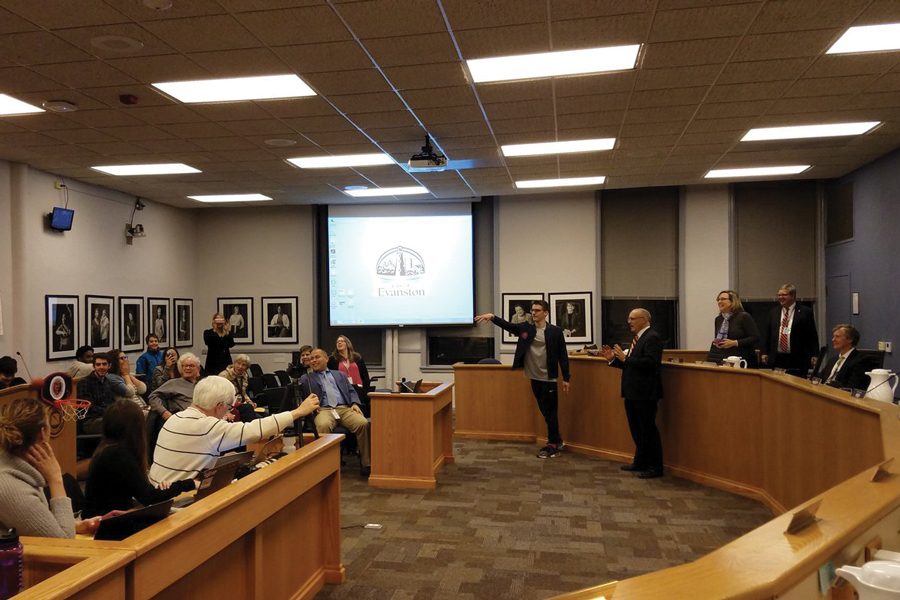 Blake Peters shoots a shot at a City Council meeting on Monday. Peters made a game-winning downcourt heave in the final seconds of a Friday Evanston Township High School basketball game to give his team a win.

After a downcourt heave in the final seconds of an Evanston Township High School basketball game netted Blake Peters an ESPN SportsCenter No. 1 play and national notoriety, the 15-year-old had himself a day.

At Monday’s City Council meeting, Mayor Steve Hagerty proclaimed that Jan. 29, 2018, was Blake Peters Day in Evanston, to the cheers and applause of those in attendance. Hagerty played a video of Peters’ shot to the crowd and even had Peters attempt to make a similar shot in the council chambers on a mini-hoop. He missed.

Hagerty said many kids growing up dream of being the hero at the end of a game.

“How many of us grew up playing sports … and you just wanted to have that one amazing performance?” Hagerty said.

On Friday, Peters grabbed a rebound after a Maine South High School player missed a free throw. He chucked up a shot from about the opposing free throw line that went in as the buzzer sounded. The shot gave ETHS a 45-44 win, and the freshman was stormed on the court by his teammates.

The video, Hagerty said, has been viewed over two million times, and he added that Peters’ shot had been dubbed “The Shot of the Year,” “The Peters Prayer” and “The Shot Heard Around Evanston.”

Peters said at the meeting that he had never practiced the shot beforehand.

“When it went in, I was shocked,” Peters told reporters at a news conference. “It was probably the best moment of my life.”

Peters said he is looking for things to get back to normal after a hectic past few days. The freshman said he has aspirations to play Division I basketball.

Ald. Eleanor Revelle (7th) said it was exciting for both Peters and the city to be in the news. She added that the news was so widespread that she was visiting her son in Boston when she saw the shot, and he had seen it before she had even heard about it.

Revelle said members of the City Council enjoyed having the opportunity to recognize the accomplishments of young Evanston residents and that it was valuable for Peters to be awarded.

“It’s always good to have an experience in front of members of the public,” Revelle said. “The more opportunities we give to young people for that, that’s really important.”

Hagerty and city manager Wally Bobkiewicz sported orange and blue ties — ETHS’s school colors — and Hagerty added that Peters’ “determination and drive” at the end of the game makes him a great role model for youth to never give up.

“What appears to be impossible at times is possible,” Hagerty said. “A lot of the issues that we work on are difficult, tough issues that sometimes you hit that shot, and you get it right. I know that that’s going to happen with this council over the next four years.”