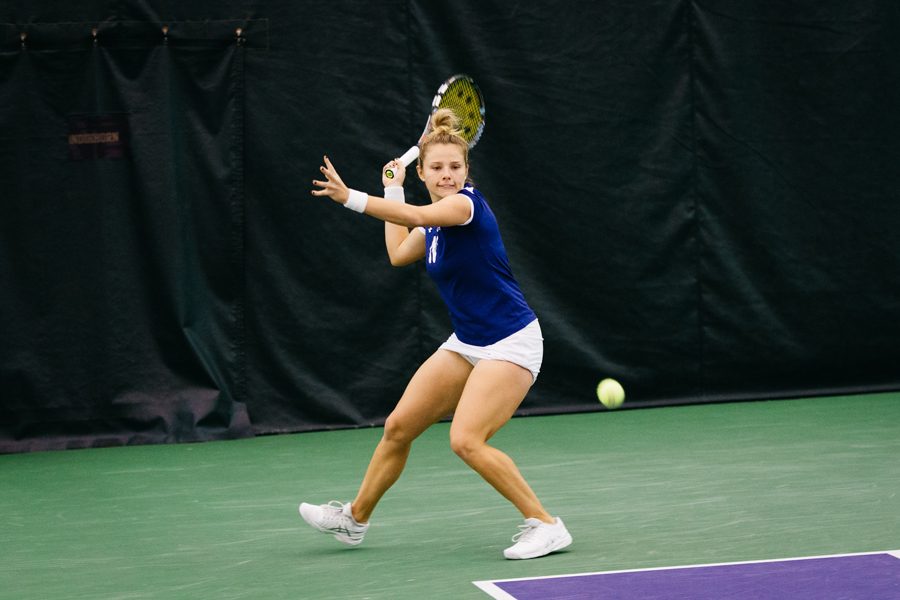 Alex Chatt prepares to strike a forehand. The senior lost her only singles match of the weekend against UCLA.

Northwestern split its pair of matches in Lexington, Kentucky, this weekend, coming up just short of earning a bid to the ITA National Indoor Team Championships.

The Wildcats (3-1) started off Friday with a commanding 4-0 win over No. 21 Kentucky (2-1) before suffering a heartbreaking defeat to No. 16 UCLA (3-0). NU’s matchup against the Bruins came down to the final set of the final match, in which Alaina Miller defeated senior Alex Chatt at the No. 6 singles spot to give the Bruins a 4-3 match victory.

“It was a very encouraging weekend,” coach Claire Pollard said. “Obviously I was a bit disappointed with today’s outcome, but I saw so many great things out there. UCLA has a legitimate shot to win indoors. I think their ranking is a bit deceiving.”

The Cats were dominant in doubles over the course of the weekend, going 4-0 and picking up the doubles point in both matches.

The pair of junior Rheeya Doshi and sophomore Julie Byrne cruised to victories in both of their matches, while the highly ranked doubles pairs of seniors — No. 4 Erin Larner and Maddie Lipp, and No. 8 Chatt and junior Lee Or — each took home a win to conclude a perfect doubles weekend.

NU took care of business in singles against Kentucky, winning at the No. 2, 3 and 4 spots to close out the 4-0 match win.

However, the Cats ran into trouble against the highly-ranked Bruins’ singles squad. Featuring five players ranked in the top 120, including No. 16 Ena Shibahara, UCLA just edged NU in a closely contested set of matches.

The Cats found themselves needing just a win from Chatt to break the tie with the Bruins and ultimately go to the indoor championships. In the most exciting match of the day, Chatt battled back from a set down to force a match-deciding third set before running out of gas, losing a 4-2 lead and dropping it 6-4.

“We would not want anyone else out there,” Larner said. “It’s a really exciting experience in a situation like that. It was a bummer that we came up just short, but she really fought.”

Larner and Lipp picked up the two singles against UCLA, remaining undefeated on the season at the No. 2 and 3 spots, respectively.

Despite the loss, Pollard is confident that the defeat to the Bruins will serve as valuable experience down the road.

“You want to be in those types of matches,” Pollard said. “You want play in those moments, and for our kids to see that so early, I think they can use that and get encouraged by it. I’m very excited for what can happen this season.”