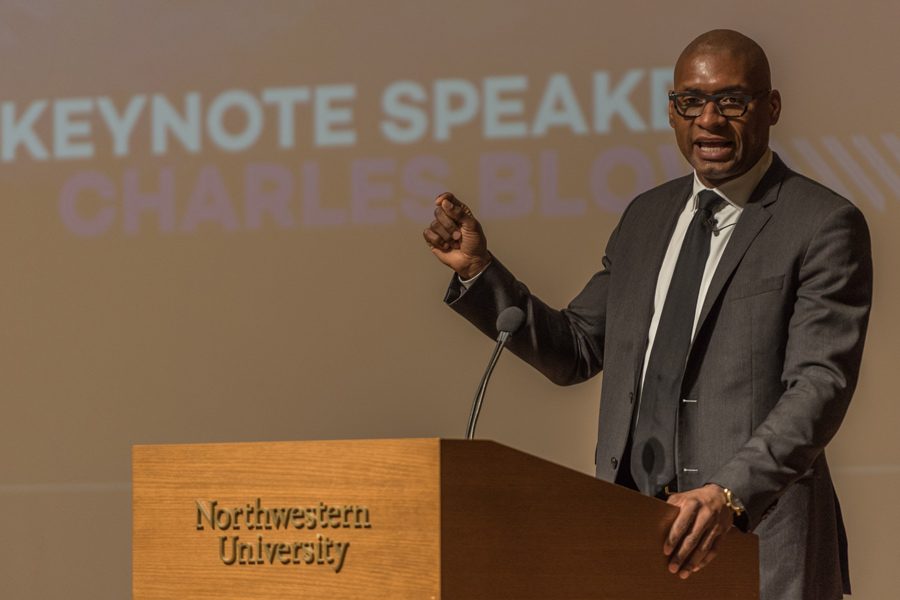 If people in the U.S. want to address issues of racism, they have to focus on not only individuals, but also larger institutions such as the criminal justice system, New York Times columnist Charles Blow said at a Thursday address.

“Our present culture rests on historical context,” Blow said. “More black men are now behind bars or under the watch of the criminal justice system than were enslaved in 1850, just 11 years before the Civil War.”

Blow spoke to a crowd of about 600 people in Ryan Auditorium, including University President Morton Schapiro, about race, poverty, mass incarceration and how these issues have evolved since the time of Martin Luther King, Jr. Blow’s keynote address was part of Northwestern’s two-week commemoration of King, organized by the the Office of Institutional Diversity and Inclusion and Associated Student Government.

“Every year this becomes a larger and larger event because we’re beginning to see the importance of not just Dr. King, but the entire idea of civil rights and human rights for all, and this notion of inequality in the United States being persistent but overcomable,” Mulukutla, a Weinberg senior, told the Daily. “It’s something that we need to constantly be fighting against.”

Blow said liberal cities are still profiting from “black and brown flesh” by means of mass incarceration and over-policing in predominantly black neighborhoods, which allows them to gain funds from fines and prison fees. Blow said that consequently, black families are stripped of their male family members.

Throughout the U.S., nearly 600,000 black men between the ages of 25 and 54 are in prison, according to The New York Times. This means in some cities — like Ferguson, Missouri — half of the young black men are missing from the community, which has a devastating economic impact on the communities. Mass incarceration has become “the new Jim Crow,” Blow said in reference to Michelle Alexander’s book on the subject.

Blow emphasized that racism was prevalent even in supposedly “liberal” places like the North and the West during King’s time, referencing a march in Chicago where 10,000 white people showed up in violent opposition to the civil rights movement. Blow said that these areas still remain racist today, calling them “the new civil rights battle grounds.”

“I often think of racism as having developmental cycles,” Blow said. “In the South it’s just an old man. His racism has not vanished; it has just mellowed and made peace with itself. In the North, racism is raging like a teenage boy, acting out the way the old man had done years ago.”

Though King is best known for his “I Have a Dream” speech, Blow said his lesser known “The Other America” is more influential as it deals with economic inequality and its link to racism.

Blow said the country must continue to work toward equal rights for all, just as King tried to achieve.

“Pity does not dismantle privilege, but supports it,” Blow said. “Pity can be a violence, and to this day America and these supposedly liberal cities in the North and West are still profiting from oppression.”