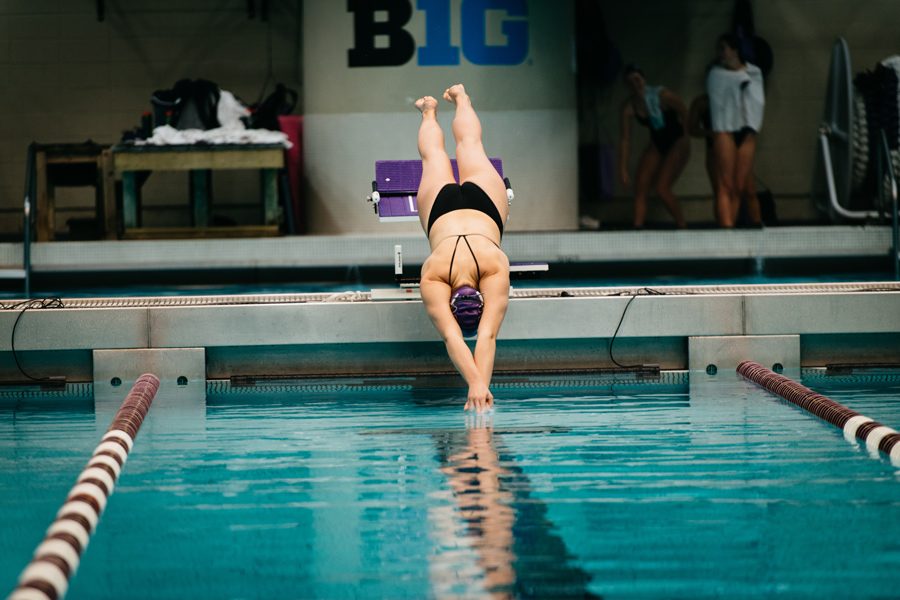 A Northwestern swimmer dives into the pool. The Wildcats will look to pick up their first conference victory of the season this weekend.

After a dominating performance against Iowa last weekend, Northwestern hopes to carry the winning momentum in this weekend’s two-day meet against Minnesota and Purdue. The trip to Minneapolis will be the final meet of the regular season before the team heads to the Big Ten Championships in February.

The Golden Gophers (7-1, 3-1 Big Ten) and the Boilermakers (4-2, 2-1 Big Ten) will be tough competition for the Wildcats (6-3, 3-1 Big Ten), especially the hosts, who sit at No. 18 in the country. Coach Abby Steketee is hopeful that NU can bring the determination from last weekend’s meet to Minnesota.

“They just fought really hard and were consistent from event to event. The positive energy was phenomenal. The pride was phenomenal,” Steketee said. “That same kind of energy and self-pride and keeping their focus on their own lanes would be great to see.”

The meet will be good practice for the conference championships, Steketee said, because the Cats can become familiar with and finalize their championship-meet routines over the two days of competition.

Additionally, the gradual reduction of yards swam in practice will help contribute to faster times, Steketee said. She added that the goal is for those times to “peak” at the Big Ten Championships.

“It’s about effort and precision this weekend. These are two teams ranked well ahead of us,” Steketee said. “We want the positive energy, and we want the determination. … It’s really good to swim against these teams so it’s not a surprise at Big Tens.”

Freshman Calypso Sheridan, the Big Ten Freshman of the Week, will be key to NU’s chances of possibly pulling out a victory this weekend. She won the 100- and 200-yard backstrokes against Iowa, and was a member of the winning 200-yard medley relay team.

Sheridan will be joined by Rachel Tseng, who placed second in both the 500- and 1000-free. It was Tseng’s first full meet of the season, having been injured for the beginning of the year. She is excited to get back into the water again and race, she said.

“I’ve always loved competing. I mean, who doesn’t love competition?” Tseng said. “Training has been hard, and it’s always nice to see that whatever you practice in training always pays off in meets.”

While freshmen like Sheridan and Tseng will be returning next year, the end of the regular season has a different meaning for seniors like Sydney Modeas.

Modeas, who won the 1000 free this past weekend, said she wants to have fun with the team one last time before her final regular season ends.

“Being a senior, it’s a bittersweet moment. It will be my last duel meet. It will be a great last meet to end on before we go to Big Tens,” Modeas said. “I just want to come out strong and come out on a high note. I love being together as a team, and I want to end together in high spirits.”