College Democrats of Illinois form PAC ahead of midterm elections 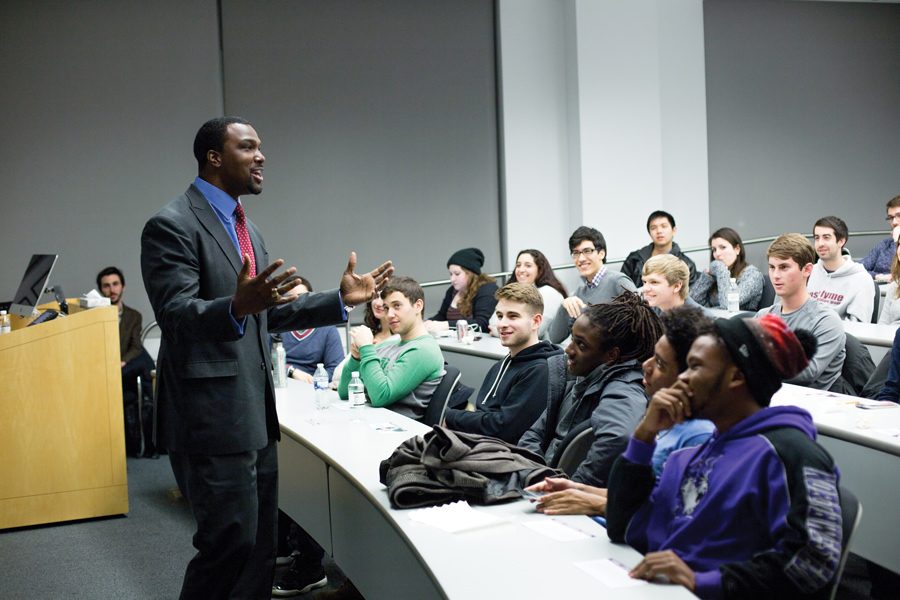 Illinois State Senator Napoleon Harris speaks at an event sponsored by College Democrats. The group’s parent organization announced they formed a PAC to fund political activities for its chapters ahead of the 2018 midterm elections.

College Democrats of Illinois announced that they formed a political action committee this month, as congressional Democrats begin their effort to retake control of the nation’s legislature.

The Illinois College Democrats PAC will allow the organization to fund candidates ahead of the highly-anticipated midterm election, said Calvin Anderson, membership director of College Democrats of Illinois and co-president of Northwestern College Democrats. The committee will also fund conventions, voter registration efforts and other political activities of its chapter organizations, the Weinberg junior said.

PACs allow organizations to pool money from donors to fund candidates and other political activities while complying with campaign finance laws. The new financial structure will allow College Democrats of Illinois to more easily fund its chapters, which proved difficult in the past because of legal obstacles, said Jack McNeil, president of the organization.

Though the group had previously formed PACs, they were dissolved because students were not familiar with campaign finance laws. This left chapters without funding from College Democrats of Illinois, said McNeil, a junior at DePaul University. However, Anderson said the lack of funding did not affect the NU chapter because the group has remained largely self-sufficient through funds raised from guest speaker ticket sales.

To better comply with the laws, the PAC will be managed by a financial advisory board that will also guide funding allocations, said the organization’s finance director Victoria Koffsky.

McNeil said the advice of the advisory council and a variety of other factors will determine where the PAC money is spent.

The PAC is just one effort by Democrats nationwide to mobilize in hopes of turning the federal and state legislatures blue. While College Democrats of Illinois and its PAC won’t fund or endorse candidates before the March primary election, Koffsky, a junior at the University of Chicago, said the organization is closely monitoring races statewide.

“It basically comes down to where do we think we can be competitive, where can we flip seats, and then where are College Dems involved,” he said. “This election will be the first test of what a budget could do … in the general election.”

The two Illinois Senate seats are considered safe for Democrats, but Republicans control seven of the 18 congressional districts in the state. Most of the surrounding Chicago area is likely to remain blue, and experts consider the Illinois 6th Congressional District, currently held by a Republican, to be contentious.

Republican Gov. Bruce Rauner is running for reelection, but has considerable competition from a number of Illinois Democrats.

Members of College Democrats of Illinois said they hope Democrats can gain political power after devastating loss in the 2016 presidential election. With the power to sway elections in the hands of millennials, Koffsky said the committee will help mobilize young voters.

“If we as college students are able to organize and really put funding toward campaigns that we think have a shot at making the House (of Representatives) blue,” Koffsky said, “then we will be able to really harness the energy of the midterm election and make sure that what college students view as important is actually accomplished.”