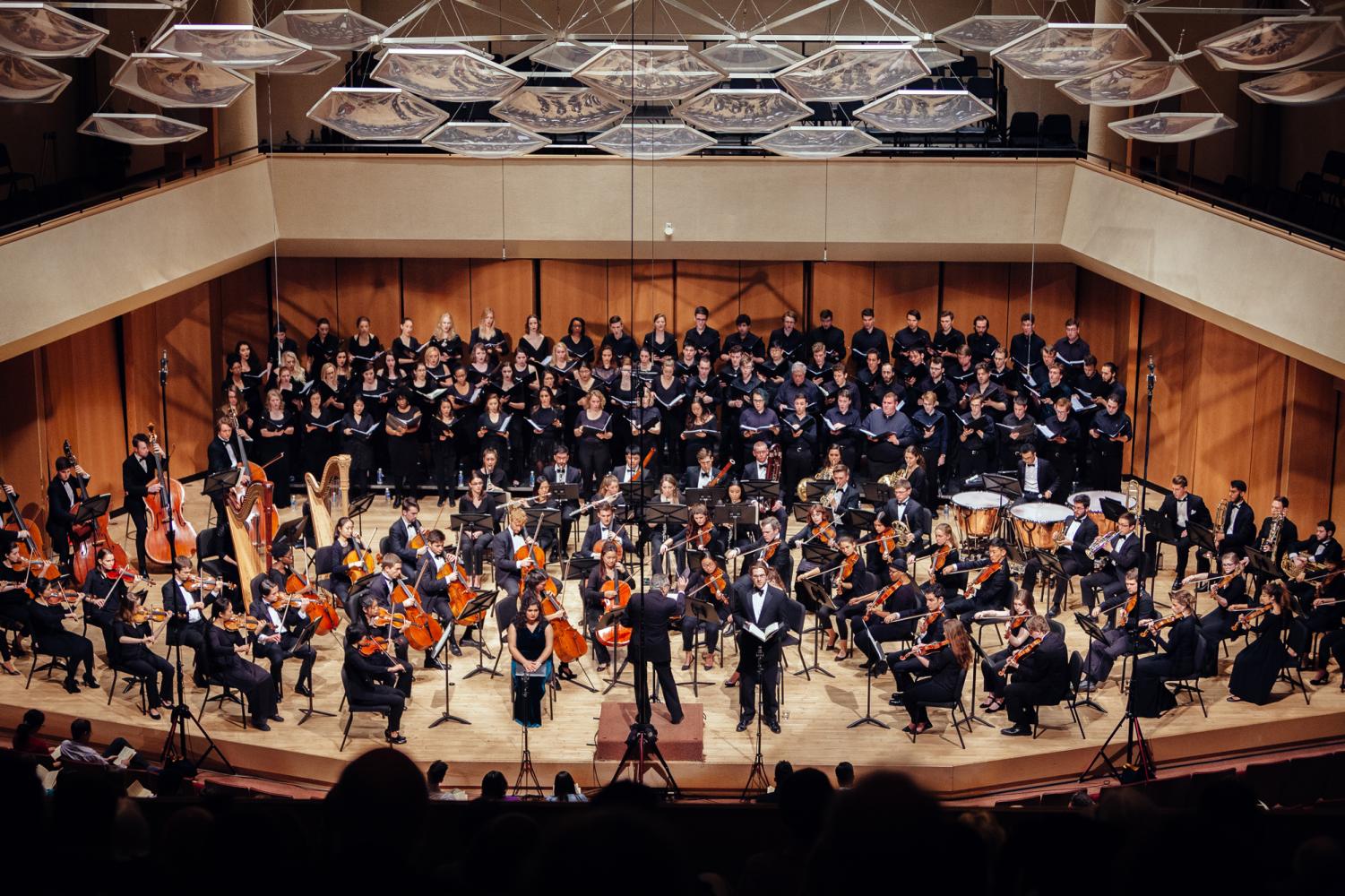 Since arriving in Northwestern in the fall of 1984, director of orchestral programs Victor Yampolsky said he has watched the Bienen School of Music transform from good to outstanding. In his 34 years, it has been his dream to “show off” his musicians to the world.

In just under two months, that dream will come to life.

This spring break, from March 25 through 31, the Northwestern University Symphony Orchestra will embark on its first-ever tour and perform in three cities in greater China, according to a news release. The group’s home performance before heading east is scheduled for Feb. 3 in Pick-Staiger Hall.

Organized by Bienen, the Buffett Institute for Global Studies and the Northwestern Alumni Association, the tour will take 87 Bienen students across the Pacific to perform the music of Leonard Bernstein and Gustav Mahler.

“(It’s our) first time away from campus,” Yampolsky said. “It’s a really big deal for us.”

University President Morton Schapiro told The Daily he will be attending the concerts in both Beijing and Shanghai before returning to Evanston in time for Passover.

Schapiro, who regularly travels to China, said the University will receive significant publicity from the tour and that preparations are currently underway.

Watch NUSO cellist Sihao He speak about his experiences as a cellist and his reaction to the NUSO tour.

Bienen master’s student Yuan Gao, a violist originally from Beijing, said she has observed an “ongoing and increasing interest” in China surrounding classical music. She said she hopes the tour will leave attendees with a “refreshed” impression of the caliber of NU’s music school.

“(China has) thousands of professionals who want to have access (to a) top-notch level of classical music,” she said. “Our school coming there will bring them a perspective of what classical education is like in the United States.”

The orchestra office’s administrative assistant Danielle Ray said the tour is funded by an anonymous benefactor, with all costs — including travel, lodging, meals and activities — covered for each musician.

Ray said that while specific plans are still in the works, students’ main priority will be their concerts, with tourist activities incorporated accordingly. Ray said the tour offers students a “wonderful opportunity” that will prepare them well in their future careers.

“A lot of (the students) have probably not done an international tour with an orchestra yet since they’re still in their degree programs,” she said. “It’s a really great experience for them to get to do this with their fellow peers.”

Yampolsky said when Bienen dean Toni-Marie Montgomery asked him to put together the tour’s program, it took him “exactly 15 seconds” to figure out what he wanted to perform: the work of Leonard Bernstein.

This year marks the 100th anniversary of the American composer and conductor’s birth, sparking Yampolsky’s initial desire to honor his music. However, Yampolsky had far more personal reasons to showcase Bernstein’s music on tour.

Yampolsky remembers auditioning for Bernstein in Rome, where Bernstein offered him a scholarship to attend what is now the Tanglewood Music Center in Lenox, Massachusetts. Yampolsky spent 13 summers at the center as a member of the Boston Symphony Orchestra and later as a conductor of the Young Artists Orchestra, he said.

Yampolsky said Bernstein had the “heart and energy” of five people and was at Tanglewood almost every summer to teach and coach up-and-coming musicians. Yampolsky would often invite him to work with his student orchestra — an offer Bernstein never turned down.

“I cannot call him just a teacher because he was more like a prophet,” Yampolsky said. “His passion for music was absolute and (was) paired with incredible eloquence and the desire to help young people … so we have to acknowledge his centennial and play his piece.”

The tour will feature “Symphonic Dances,” a piece assembled from portions of the musical “West Side Story,” which Bernstein composed. Yampolsky said the piece was specially arranged for a large orchestra by a friend of Bernstein, since the original compositions were intended for a pit orchestra.

“What people are going to hear is a full-size symphony orchestra with lots of percussion in the most brilliant rendition of what’s supposed to be a little theater orchestra in a pit,” Yampolsky said. “It is really a spectacular show.”

The group will also be performing Symphony No. 5 by Austrian composer and conductor Mahler. Yampolsky noted that not only did Bernstein enthusiastically promote Mahler’s works throughout his career, the two also drew much of their musical inspiration from street songs, combining “popular music with highbrow classical music.”

While “Symphonic Dances” will serve as a crowd-pleaser for the tour, Yampolsky said the grand Symphony No. 5 is the “perfect vehicle” to show off NUSO’s talent, showcasing all sections of the orchestra, from strings to brass.

Yampolsky said he is “extremely grateful” for the opportunity to take his musicians abroad and is certain the group will be well-received beyond Evanston.

“There is nothing more glorious than a full symphony orchestra and classical music,” Yampolsky said. “It really unites people like nothing else.”