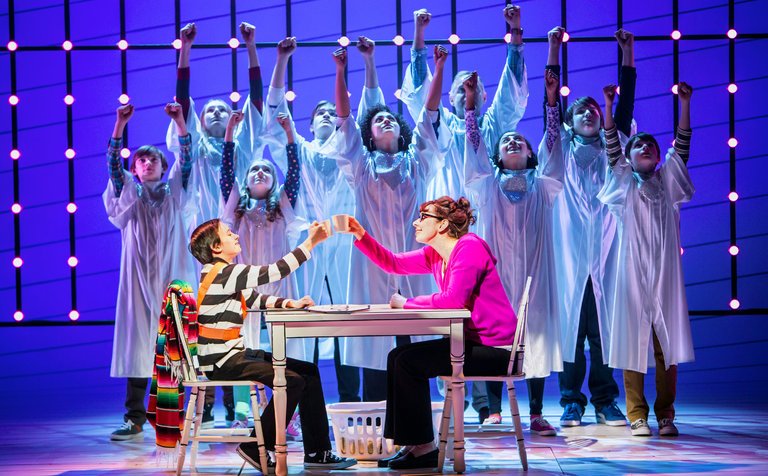 Alan Schmuckler’s first foray into songwriting began in high school. Using clunky Windows 95 software in his basement, Schmuckler began to write ditties and parody lyrics that were not meant to be shared with anyone, but rather would remain in the private safety of his PalmPilot for perpetuity.

Over a decade later, Schmuckler (Communication ’05) has transformed from a kid with an old computer to rank among the hottest up-and-coming lyricists of his generation, winning $100,000 through the 2018 Kleban Prize for his most recent work, “Wait Wait Don’t Kill Me.” Each year the award committee honors whom they deem the most promising musical theatre lyricist, and previous winners have gone on to write the lyrics for Tony-winning musicals including “Fun Home” and “Avenue Q.”

Schmuckler credits his experience working on the Waa-Mu Show with honing his songwriting skills. He said he first became involved his freshman year after attending a writer’s meeting on a whim, with a song he had begun writing before coming to Northwestern that he thought could fit well into the show.

The show’s head writers agreed. “Out of curiosity and excitement,” he said, he wrote a few more songs that were accepted into the show, and remembers being awestruck hearing them performed live in the spring with a full cast and orchestra.

“I remember where I was in Cahn Auditorium the first time I saw the Waa-Mu Show my freshman year,” he said. “Hearing music I had written, hearing lyrics I had written, what a thrill and what an honor that was.”

Others took note of Schmuckler’s talent when they saw the Waa-Mu Show. Head of the musical theatre department and Communication Prof. David Bell said he was thoroughly impressed by Schmuckler’s work.

“I was just dumbstruck by the sophistication and variation of the work that an undergraduate could contribute to that kind of show,” Bell said.

It was through Waa-Mu that Schmuckler met one of his best friends and professional collaborators, Michael Mahler — a sophomore when Schmuckler came to NU and the head writer for Waa-Mu that year. Mahler (Communication ’04) said he remembered being struck by Schmuckler’s natural talent.

“This little freshman kid came in and was playing piano like a maniac and was writing these incredible songs,” Mahler said.

Mahler said the two instantly became close friends and collaborators, and would often run their personal work by each other first before sharing it with others. The pair not only continued to work together on Waa-Mu while at NU, but entered the professional field together when Schmuckler was a senior. After participating in a songwriting showcase at Chicago Shakespeare Theater, the theater commissioned them to write an original family musical.

Schmuckler and Mahler created “How Can You Run With A Shell On Your Back?”, which Mahler described as “‘The Breakfast Club’ meets ‘Aesop’s Fables.’” The show ran at Chicago Shakespeare Theater and has been reproduced across the country since, Mahler said.

Mahler said he enjoys writing with someone he can be brutally honest with, and that he holds great respect for Schmuckler’s drive.

While Schmuckler and Mahler frequently work as a team, their most recent work being “Diary of a Wimpy Kid,” they also work independently on their own projects. Schmukler said his musical “Wait Wait Don’t Kill Me” was conceived in a nontraditional way, starting as a series of short, darkly satirical episodes based on the events surrounding the release of the podcast “Serial.”

The five theatrical bursts were combined to create a full-length musical, and then — in homage to its origin — a podcast that will be released through Spotify in late January.

While writing music, Schmuckler says he often begins by coming up with a hook that serves as a “genesis that will be the emotional center of a song.” He said he does not buy in to the belief of waiting for inspiration to strike, but rather insists in the importance of getting something on the page.

“If all you do is wait around to be inspired, you may never be inspired,” he said. “And when you work professionally there’s no time to wait for inspiration. … If people can’t rely on you to deliver something, you’re not going to work.”

Schmuckler admitted he grew up an avid perfectionist with a “compulsion to get things right.” Over the years, though, he said he has come to acknowledge that it’s okay to not get it right on the first try, and that everyone has to go back and workshop their writing.

“If you have a deadline, you have to sit down and write something, and you have to know that it’s probably not going to be the best thing you’ve ever written,” Schmuckler said. “Because who do you think you are? That’s not how people work.”

Winning the Kleban Prize has been a huge honor and source of personal validation for Schmuckler, who says he has become all too acquainted with the failure that’s associated with the unforgiving theatre industry. Though he said he took his initial failures extremely personally, he persevered and continued to work to improve and refine his work.

For him, winning the Kleban prize is proof that those struggles were worth it.

“(It’s) a validation of the merit of effort despite repeated failure,” Schmuckler said. “Failure is not preclusive to success, it’s the precursor to success.”