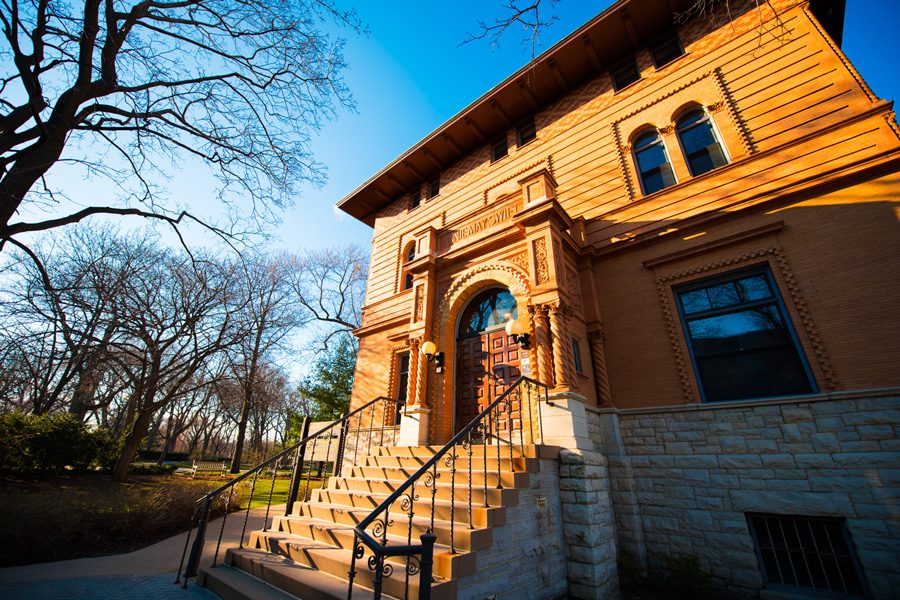 Annie May Swift Hall. Student group Applause for a Cause is struggling to create its annual feature-length film after it was denied Radio, Television and Film department recognition and funding.

In its mission to create a feature-length film, the only money Applause for a Cause has received this quarter from Northwestern is about $125 from Associated Student Government.

With this level of funding — only enough for one weekend’s worth of food on set — the group is struggling to maintain its productions year to year, co-producers Scarlett Machson and Rachel Fimbianti said.

Applause for a Cause, which produces a 90-minute film and holds a premiere each year to donate ticket sales to charity, has raised more than $10,000 since its founding in 2010. The group has never been recognized by the Department of Radio, Television and Film but applied for recognition in October, hoping to receive funding from the department and access the department’s equipment cage.

“We’re creating a feature film. We need tools,” said Fimbianti, a Communication sophomore. “We fundraise on our own. We do what we can. We use the resources that the University gives us, but more often than not, we don’t get enough money to make this endeavor a reality.”

Applause for a Cause can apply for ASG funding each quarter and has received an average of $125 per quarter this year. In addition, Fimbianti said the group has raised money through Catalyzer, Thank-a-Thon and smaller fundraisers, totaling about $2,600 so far with a goal of $4,000 for this year, but the budget varies yearly depending on fundraising efforts.

Fimbianti said the group uses outdated and broken equipment purchased in the seven years since Applause for a Cause was formed. With cage access, they would not have to spend funds on simple pieces of equipment such as the slate they purchased this year, she added.

Fimbianti and Machson’s application was denied because there was “no mention of how the group will be cycling in to the new Media Arts Grants procedures” as required by RTVF, according to an email obtained by The Daily.

The application to seek department recognition and funding requires groups to be familiar with MAGs and how “co-curricular projects” work in the department. The application also requires them to be in line with current RTVF guidelines, including MAG guidelines “if applicable.”

The application review committee reserves the right to deny any application “without comment,” according to the application guidelines. Groups may also be informed of potential areas of improvement for future applications, but there is no guarantee that strengthening these areas would result in department recognition, RTVF department chair David Tolchinsky told The Daily in an email.

Tolchinsky said Applause for a Cause’s application was “thoroughly reviewed (and) considered,” and though they didn’t receive funding this year, they are “welcome to apply again next year (or) next cycle.” The group could continue to operate without department recognition, he added.

Machson, a Communication sophomore, said she and Fimbianti took issue with the denial because they thought the application guidelines were vague and didn’t clearly state that a group needed to directly relate to MAGs to receive department recognition.

The new MAG system has drawn criticism recently from some students, who believe it has diminished student influence in the funding process.

Machson also added that that though she could understand the decision better if the group had no experience, it has produced seven feature-length films and received recognition campus and nationwide.

After the group was denied recognition in October, Machson and Fimbianti reached out to Applause for a Cause alumni, including the two founders, Sarah Jane Inwards (Communication ’13) and Alec Ziff (Communication ’13), to rally support for department recognition. Eleven alumni emailed Tolchinsky and RTVF associate department chair Zayd Dohrn in support of the group’s receiving recognition, copies of which were obtained by The Daily.

“I think there’s a certain frustration felt by a lot of the Applause alumni that when we go out and tell people what we did, we’re usually very supported because it’s really a huge feat,” Inwards said in an interview. “But within the school itself, we don’t really feel like there’s much support.”

Correction: A previous version of this story misstated the cost of food on set and Applause for a Cause’s current budget, due to incorrect information from a source. $125 funds one weekend’s worth of food on set, and the group has raised about $2,600 this year. The Daily regrets the error.