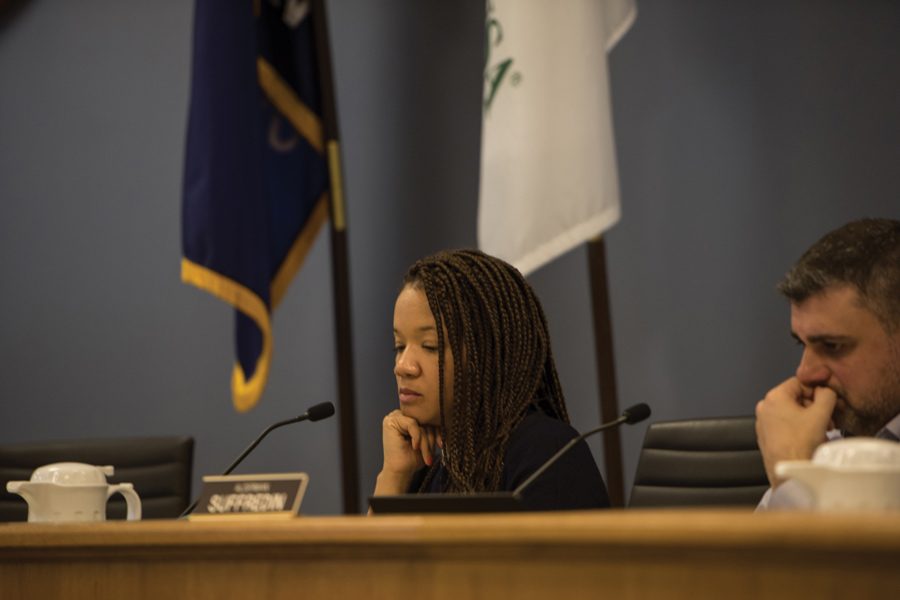 Ald. Robin Rue Simmons (5th) ruminates. Aldermen decided to delay approval of a new restaurant and community center until improvements were made to the building's facade.

Aldermen voiced support for the eventual opening of the restaurant — which will be located at 1723 Simpson St. — but delayed granting a special use permit until the building’s glass block windows are replaced with transparent glass and the bars on windows and doors are removed.

Applicant Robert Crayton said he was frustrated with the verdict and felt that communication from the city had been unclear.

“They’re just making us jump through hoops,” he told The Daily. “I just want it to be fair.”

Crayton said he wants to create a multipurpose area complete with programming and activities where residents, particularly kids and teens, can stay safe and busy. He added that he hopes to open the space in two phases: first, as a small restaurant without seating, and then expanded as a community space.

“It’s supposed to have an open area where we can have events,” Crayton said about the second phase. “We can have programming for the kids, and we can also have a workout spot, a family fun night.”

Robert Crayton’s daughter, Jasmine Crayton, who grew up in the 5th Ward and now works at the McGaw YMCA, told The Daily she feels strongly about the importance of a place like Rubie’s.

“This is supposed to be the place that everybody can come to and they can find something for them there,” she said. “(We need) a safe environment … for our people. The 5th Ward doesn’t have that.”

Although Robert Crayton agreed with aldermen’s demands to renovate the building’s windows, he said he does not have the money in his budget to complete the renovations. At the city’s recommendation, he applied for a facade improvement grant, which could pay for the new windows.

The restaurant’s potential location has been abandoned for the past two years and also fails to adhere to certain Evanston codes, said community development director Johanna Leonard. It only has one accessible bathroom approved by the Americans with Disabilities Act — according to Leonard.

Antiona Simpson, who identifies herself as a low-income parent and educator, said she appreciated the prospect of affordable options for breakfast and a safe place for her kids to spend their time.

“Some mornings I cannot feed my child,” Simpson said. “We need that extra hand sometimes. … I do support this truly for the children in the community and also just to give back to community, because that’s something that we need more of.”

Ald. Robin Rue Simmons (5th) said she loves the idea of a restaurant like Rubie’s and stressed, in response to frustration from fifth ward residents, that there is nothing unusual about the process they are undergoing.

“We have standards and we have policies that we have to operate within; it just takes some time,” she told The Daily. “The great news for Mr. Crayton is that he was not in any way denied, he was given an opportunity to apply for a grant and given the support he needs to launch in the most effective way possible.”