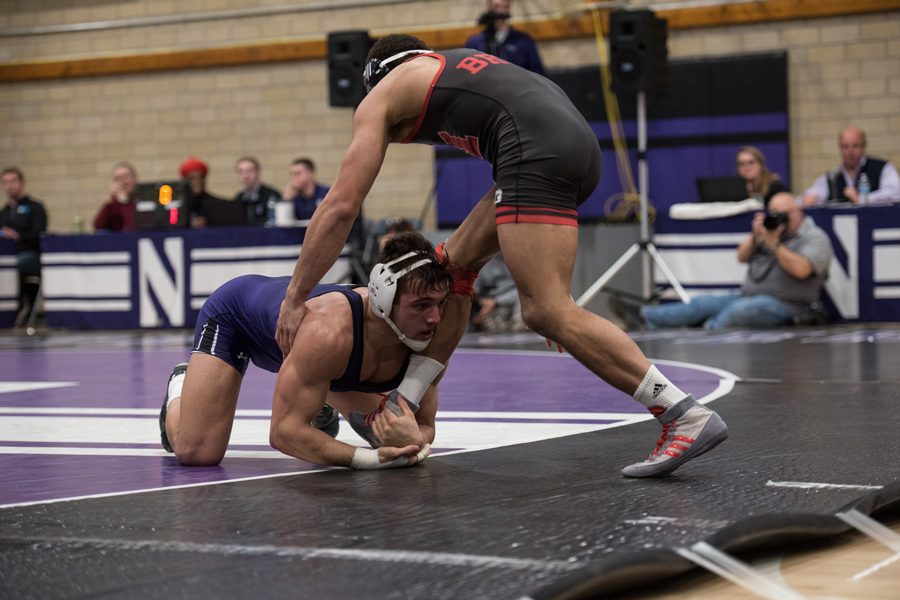 Johnny Sebastian struggles for a takedown. The junior pulled out a major decision victory against Nebraska, but Northwestern still fell to the Cornhuskers.

An uninitiated fan would have been surprised as the final score was read aloud at Patten Gym: “Nebraska 18, Northwestern 18. Nebraska wins.”

The teams had split the 10 matches exactly evenly, but the Cornhuskers won on tiebreaker points.

“It is particularly hard to stomach when we lose a match on bonus points,” coach Matt Storniolo said. “We need grittier performances out of a couple guys. We’ve got to win those close matches.”

It was such a close match that the third tiebreaker criteria, total points, was used. No.18 Nebraska came out ahead by two points in that category to snag the victory.

Four of the 10 matches came down to a one- or two-point differentials, leaving the No. 20 Wildcats to ponder what could have been.

“There were several close matches that we had an opportunity to get our hand raised at the end of and we did not do what we had to do to find those wins,” Storniolo said. “(We need more) attention to detail, lower stance, better shot defense, getting our escapes and most importantly not giving up takedowns at the end of periods.”

NU (8-2, 2-2 Big Ten) got out to a roaring start, opening the match with a 10-0 lead through three matches thanks to victories from sophomore Zack Chakonis, junior Conan Jennings and redshirt freshman Sebastian Rivera.

It took overtime for Jennings to snag the decision, a result that he was disappointed in given his competition.

“I can do better than this,” Jennings said. “I should not be going into overtime with guys like this, guys who are not ranked. I’ve beat better guys, and I’ll continue to do so in the future.”

After the Cats took that 10-0 lead, however, Nebraska (5-3, 3-1) mounted an impressive comeback and took a 15-14 lead when Isaiah White defeated graduate transfer Michael Sepke by tech fall.

The only win for NU over that stretch came from redshirt freshman Ryan Deakin, who pulled out a major decision victory. Deakin, ranked No. 4 at 149 pounds, took down his No.10-ranked opponent with a slick takedown and pulled out the 11-2 win.

“I knew I needed to get one more, so we get the major (decision) big team point there,” Deakin said. “He was fighting it hard. … Once I got that leg up and I sweeped it up I knew I was getting a takedown so, just what we drill. It was a good match.”

When junior Johnny Sebastian picked up a major decision victory to put NU up 18-15 with one match to go, the Cats were in position to pick up the team win with a victory by senior Mitch Sliga.

Sliga, however, couldn’t get the job done, falling in a 2-1 decision to Taylor Venz and allowing the Cornhuskers to square the match at 18 and pull out the tiebreaking victory.

“As a whole, I think the team wrestled really tough today,” Jennings said. “We lost on a few key matches, one or two points for us. Get a major there or not give up a tackle or major on the other side and I think we can win that match.”