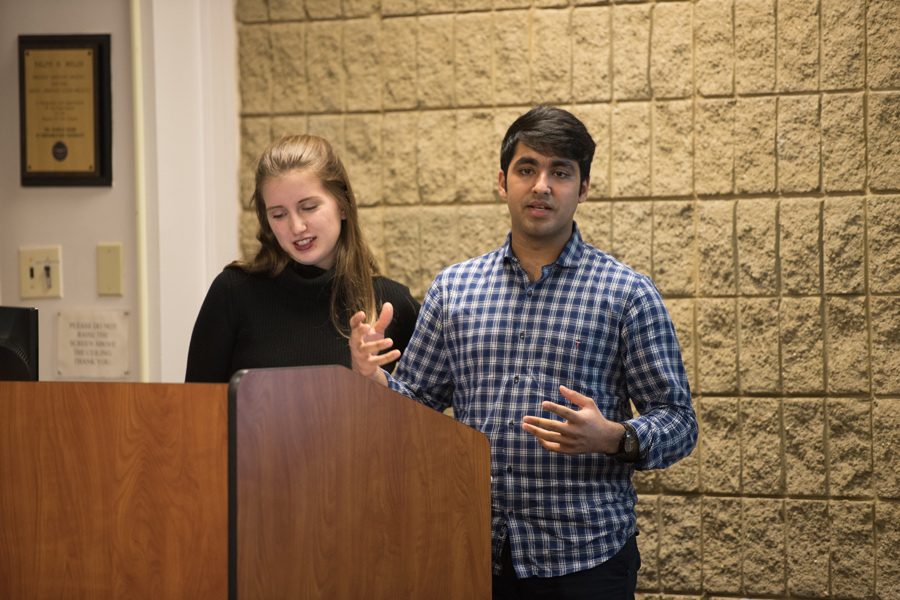 Emily Ash and Sid Ahuja speak at ASG Senate. In February, ASG will hold its new Improve NU Challenge, in which students will present ideas for improving the campus and potentially receive funding to implement them.

Associated Student Government will sponsor a new Improve NU Challenge event in February, where students will present solutions to University problems for a chance to implement them through ASG funding.

The ASG Public Relations committee will coordinate the challenge Feb. 24 from 8 a.m. to 4 p.m. in Norris University Center, according to an ASG news release. In groups of one to four people, participants will give presentations to faculty for the opportunity to win funding to implement the ideas on campus.

ASG’s vice president for public relations Emily Ash said about a dozen faculty have signed up to judge the competition, but ASG will continue to recruit more. Some ASG executive board members may also judge and be paired with faculty members, the Weinberg junior said.

Students will be notified about whether they can compete a few days after applying, Ash said at Wednesday’s ASG Senate meeting. From there, they will have about a week to contact sources and plan out their ideas.

“We’re looking for clearly-formed problem statements and again, really, a passion and excitement for tackling an idea with realistic scope for the next couple quarters,” Ash told The Daily.

Ash said the top three winners will receive monetary prizes sponsored by The Garage. The first place group will receive $750 and a space of their own at The Garage, second place $500 and third place $250. Then, working with the Office of Student Affairs, ASG will fund and implement their ideas.

ASG senator Sid Ahuja brought the idea for the program to Northwestern after transferring from University of Texas at Austin, where he participated in a similar program. One of the best parts of the challenge, he said, was connecting with decision makers and faculty members.

“I love this concept,” Ahuja said. “I was amazed with how directly students were able to work with administrators, and I saw the power in that.”

The McCormick sophomore said in Wednesday’s ASG Senate meeting that the event hopes to overcome some of the issues that sometimes prevent students from making change on campus — such as difficulties finding support or guidance for their ideas, a lack of resources and limited mechanisms to implement long-term change.

Ahuja said any winners will implement their ideas throughout the next two quarters with ASG assistance. Interested students can attend information sessions on Feb. 8 and Feb. 13, he added, and applications are due Feb. 16.

ASG President Nehaarika Mulukutla said this challenge, at its core, is about empowering students with marginalized voices to make the changes they want to see at NU.

“This is giving students the opportunity to experience exactly what ASG does on a daily basis,” Mulukutla told The Daily. “But also to see exactly how much power they have to elevate their voices and show students that they truly do have everything they need to make any sort of change they want on this campus or in this world.”