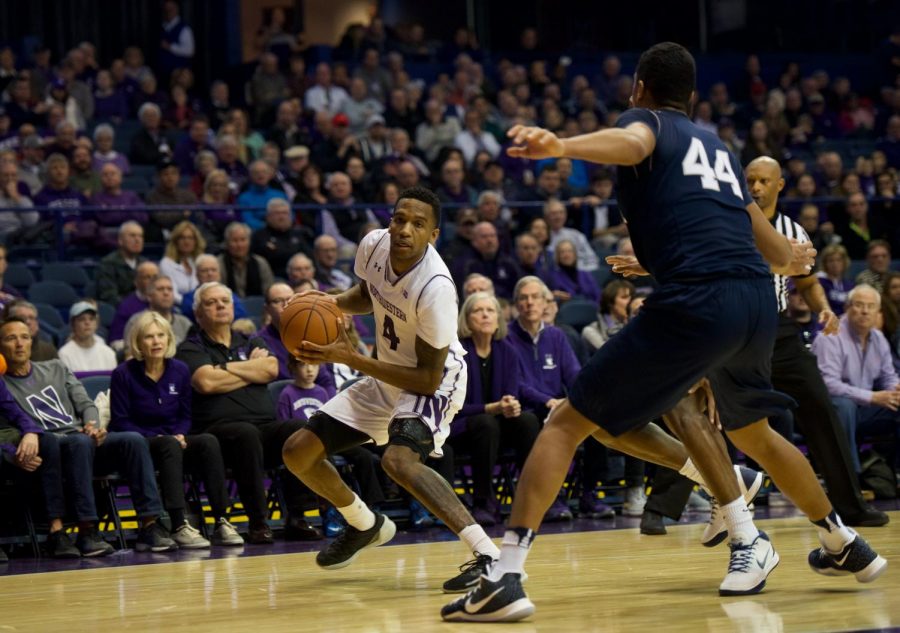 Vic Law makes a move. The junior forward had 18 key points in the Wildcats' win on Saturday.

ROSEMONT — Northwestern trailed for over 30 minutes of game time and 14 minutes in the second half, but the Wildcats pulled ahead when it mattered to secure a 70-61 victory over Penn State on Saturday afternoon.

Trailing 59-55 with just over 7 minutes remaining at Allstate Arena, NU (12-9, 3-5 Big Ten) ran three successful plays to get junior center Dererk Pardon open looks at the rim, locked down the Nittany Lions on the other end, and took a 2-point lead.

And then, on a tip-out rebound from senior forward Gavin Skelly, junior forward Vic Law buried possibly the biggest shot of the game, a 3-pointer from the top of the key to give the hosts a 5-point lead with 4:10 left.

“That was pretty satisfying, especially when I wasn’t in the play at all and didn’t do any of the work,” Law said. “It was a great game. Gavin played very, very well … He did a lot of good things.”

Law, who led NU with 18 points, may have hit the biggest shot, and that was enough to blunt Penn State (13-8, 3-5) guard Shep Garner, who scored 22 points to lead all scorers. Garner was a long-range marksman, going 6-for-11 from 3-point range, with a few of those shots coming from far beyond the arc.

While Law couldn’t match Garner shot for shot, the Cats hung around thanks in part to effective production off the bench, with freshman guard Anthony Gaines and junior guard Jordan Ash combining for 11 of NU’s 13 bench points. The visitors could manage only 8 points among their reserves.

“He’s just growing up right before our eyes,” senior guard Bryant McIntosh said of Gaines. “He’s really going to be a great defensive stopper, first off. His game is coming around offensively. … He’s really been working hard on it.”

In an efficient but disjointed first half, the teams combined to shoot 56 percent from the field. That was partially due to Garner’s standout performance, but the Cats also went 12-for-20 inside the arc and outscored the Nittany Lions 20-16 in the paint.

In the second half, however, Garner cooled off and the Penn State offense fell apart. The Nittany Lions went the final 10:37 of the game without a made field goal and were outscored 19-6 during that stretch.

“As the game went on, we did a better job of staying attached to Garner,” McIntosh said. “Our bigs did an excellent job protecting our basket. … Together, it was a collective effort. I thought we put on a pretty good defensive clinic.”

Notably absent from that defensive clinic was sophomore forward Aaron Falzon, who played only three minutes and recorded no stats after sitting out Wednesday’s game against Ohio State with a back injury.

This time, according to coach Chris Collins, it wasn’t an injury keeping Falzon out of the game.

“Matchup-wise, he was available to play. I just liked what our smaller lineup was giving us,” Collins said. “Having three athletic forwards, I thought that was being effective.”