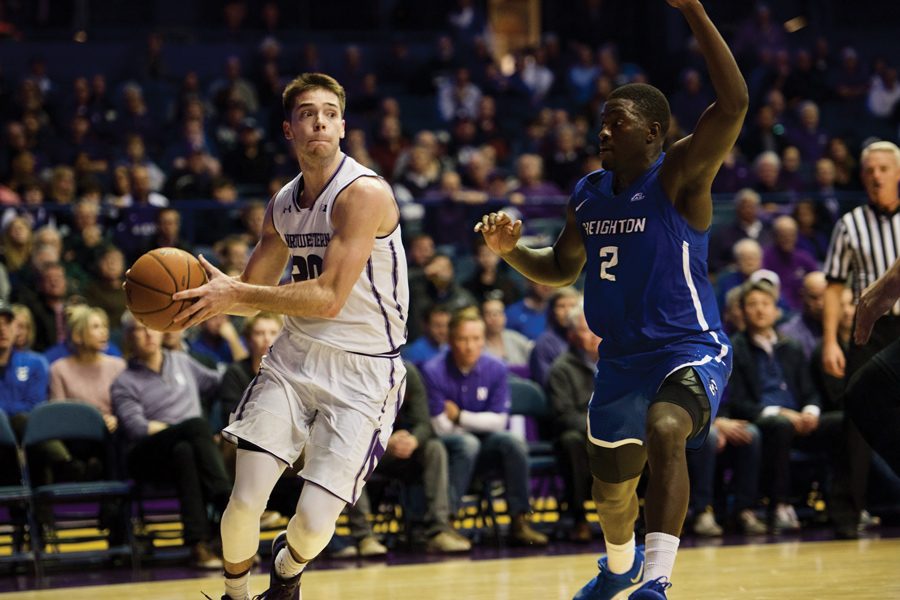 Bryant McIntosh struggles to find a teammate. The senior guard had 18 points in NU’s first showdown with Penn State two weeks ago.

Despite the scoreline, senior forward Gavin Skelly saw Northwestern’s 71-65 loss to Ohio State on Wednesday night as a step in the right direction. Now, Skelly said, the priority for the Wildcats is simple: not to take any steps back.

“I think we’re playing hard (and) playing very effectively,” Skelly said Wednesday. “We need to be smarter down the stretch. For us, that’s the next step.”

NU (11-9, 2-5 Big Ten) will need to to maintain that attitude heading into Saturday’s matchup against Penn State.

The Nittany Lions (13-7, 3-4) picked up a 78-63 win when the two teams faced off on Jan. 5, and the Cats will look to even the series on their temporary home floor at Allstate Arena.

NU struggled offensively in its earlier matchup with the Nittany Lions; senior guard Bryant McIntosh made his return from a mid-season knee injury in that game and led the offense with 18 points, but was the lone Cats player to score in double figures.

In Wednesday’s loss to the Buckeyes, the offense clicked a little better, with junior forward Vic Law leading the Cats with 14 points and freshman guard Anthony Gaines having one of his strongest games of the season, finishing with 10 points and three steals. But something was still missing as NU shot just about 30 percent from 3-point range.

NU will also need a strong defensive effort to prevent a repeat of Penn State’s offensive performance the last time the two teams met. The Nittany Lions shot about 71 percent in the first half and 55 percent overall from the field in the Jan. 5 win.

The Cats have made adjustments on the defensive end recently, switching from a purely man-to-man defense to a 2-3 zone in recent games against Ohio State, Indiana and Minnesota. NU experimented with a trapping press in the second half of the Ohio State game, and the defensive pressure spurred a late 16-6 Cats run and a comeback that fell short.

“We just put in the press last week, so as we play with it … it gets more effective,” Skelly said. “Guys start to figure out what spots work, what spots don’t, how to cheat things, how to play guys. And for a lot of teams, I don’t think they’re used to us doing that. So a lot of teams, we catch them off guard.”

The Nittany Lions’ offense centers around guard Tony Carr and forward Lamar Stevens. Carr currently ranks second among all conference scorers, averaging 19.6 points per game, and Stevens scored a career-high 30 points in the win over the Wildcats earlier this month.

“We’re still trying to figure out how to win, how to punch through,” Penn State coach Patrick Chambers told reporters after Monday’s game. “I thought Nebraska was a great growth and learning experience, but obviously we have to keep working with them to teach them that every single night, you have to compete in this league.”

With the regular season past the halfway point and three consecutive road games ahead on the schedule, the Cats are approaching crunch time.

The energy that Collins saw from his team during the Ohio State game, he said, implies that NU is heading in the right direction.

“I feel like if we play with this kind of effort and this kind of spirit,” Collins said Wednesday, “we’ll put ourselves in a position to win a lot of games here down the stretch.”