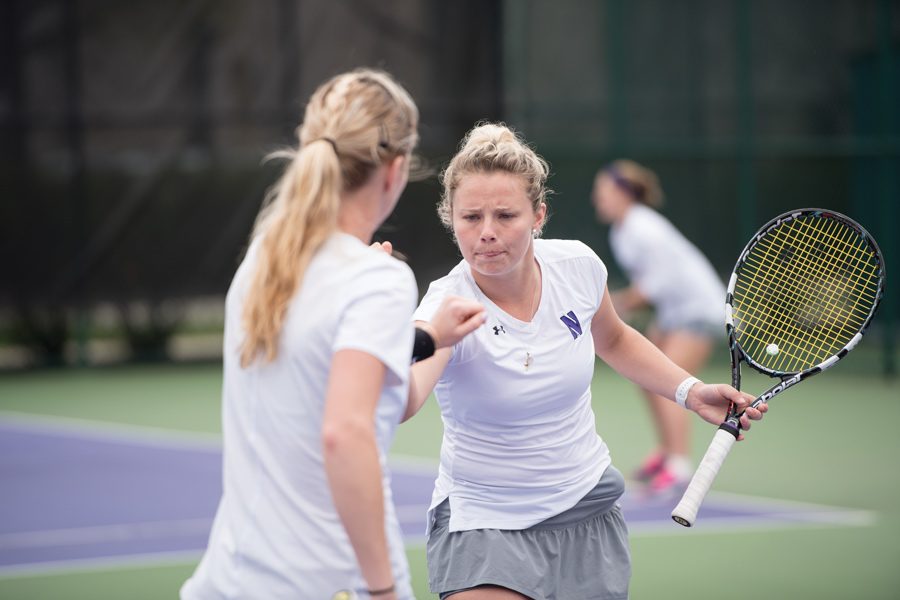 Maddie Lipp and Alex Chatt fist bump after a point. The seniors hope to lead an experienced NU squad heading into the 2018 dual match season.

Northwestern is looking to build upon last year’s second round appearance in the NCAA Tournament beginning with home matches against Ball State and St. Louis on Saturday to open 2018.

The Wildcats, who finished an impressive 9-2 in the Big Ten in 2017 despite being just three games above .500 overall, will count on a strong group of upperclassmen in the new season.

Seniors Alex Chatt, Erin Larner and Maddie Lipp have won consistently at the top of the lineup throughout their career, and coach Claire Pollard will rely on their singles and doubles prowess as NU pursues its first regular season Big Ten title since 2012.

“Hopefully (senior leadership) will be an advantage for us,” Pollard said. “It’s going to take everyone. It certainly helps to have that experience, and I look forward to that being an edge for us.”

“You’re not going to come out of this program getting any worse,” Chatt said. “We work really hard every single day, and (Pollard) just knows the game better than anyone I’ve ever been coached by.”

NU hopes to build on a busy fall season in which Larner and Lipp took home the doubles title at the ITA Midwest Regional.

The Cats competed in a variety of fall tournaments, going undefeated at the September Duke Bonk Invite and even training abroad in Australia.

“As a team we had really good doubles the entire fall, no matter what combinations we threw out there,” Larner said. “We would like to carry that over into the spring and hopefully get the doubles point in all of our matches.”

Likely boasting multiple strong doubles pairings and a collection of solid singles players, NU is poised to compete at the top of the Big Ten again this year, but the Cats hope that their collective talent can carry them to new heights.

As dominant as the program has been, NU has suffered second round exits in the NCAA Tournament in four consecutive years. This year’s senior class has its eyes set on taking its success to a new level, both in conference play and on the NCAA scene.

“We have two teams that are ranked top-10 in the country for doubles, which is just huge,” Chatt said. “We want to come out winning a Big Ten championship because that’s what we came to the school for.”

The Cats must first focus on Ball State and St. Louis, as they begin dual match play in Evanston this weekend.

For Pollard, this weekend’s contests will be a matter of her players simply getting back into match form.

“I think we’ll find out a lot about ourselves in the month of January,” Pollard said. “We just need to get everyone back into playing mode. Playing a dual match, first one at home, we just need everyone to get some of the rust off.”