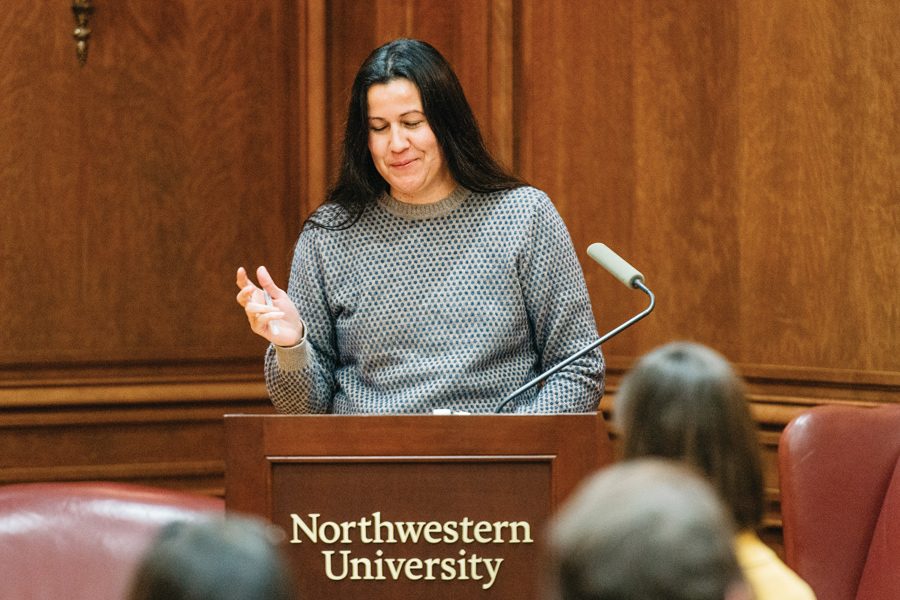 Mojave Native American poet Natalie Diaz speaks at Harris Hall about native culture in literature. The talk was co-sponsored by the Center for Native American and Indigenous Research and Weinberg College of Arts and Sciences.

Northwestern welcomed poet Natalie Diaz on Wednesday to share her poetry and lead a conversation about preserving indigenous culture through literature.

The conversation, co-sponsored by Weinberg College of Arts and Sciences’ Department of English and the Center for Native American and Indigenous Research, took place in Harris Hall as part of the Moore Lecture Series. The project aims to provide a platform for established writers to talk to students, faculty and other community members, according to the English department’s website.

Diaz, who is Pima and Mojave, was born in the Fort Mojave Indian Village in Needles, California. She spent more than half of her life as a professional basketball player and is now, among many other titles, an author and archivist of indigenous languages.

“She is a poet, a sister, a warrior and amazing human,” said English Prof. Chris Abani, who introduced Diaz.

Abani and Diaz both emphasized the importance of using humor when talking about difficult subjects. Diaz maintained a lighthearted tone, even during heavy conversations on topics such as the occupation of Native land, abuse, molestation and death.

Diaz said she wrestles with her many titles when writing poetry, one of them being her identity as an indigenous woman.

Introducing her love poem, “Manhattan is a Lenape Word,” the poet described her writing as a form of empowerment and a way for her to reshape the image of indigenous womanhood. Diaz said the poem draws a parallel between the occupation of indigenous land and that of the indigenous woman’s body, representing how the latter is labeled as an entity open to other people’s pleasure, she said.

“If you are a woman who’s suffered from any kind of tragedy or trauma, then immediately you lose the autonomy for tenderness and the autonomy for love,” Diaz said.
She added that her writing gives her a freedom that is not always offered to other indigenous women.
Diaz and English Prof. Kelly Wisecup reflected on the idea of geographical and bodily cartography and the meanings people project upon lines on a sheet of paper.

“Cartographies teach us to accept fictions,” Wisecup said, speaking of geopolitical borders that are not actually operative on the ground. She added that maps in the U.S. often draw a narrative of “Native absence.”

Further into the conversation, Diaz described the current state of the country as “a racial war” in which groups of people are being erased in the same way Native Americans have been erased. For instance, she said the naming of rooms at Arizona State University, where she teaches, after Native American nations is ironic because they are built on “dead bodies and memorial ground.”

Weinberg junior Monica Garcia told The Daily that as a Latina writer, she especially resonated with Diaz’s message.

“Poetry has been conceptualized as something that’s always like white males writing about nature, but that’s not true,” Garcia said. “I feel like poetry has always been about storytelling, and her being able to capture stories that nobody else could have capture is really important.”