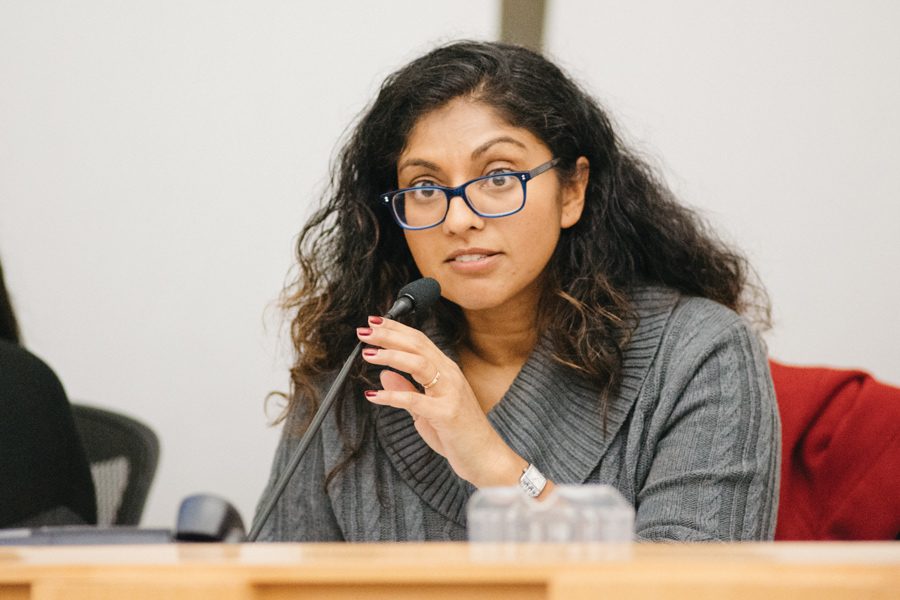 Evanston/Skokie District 65 School Board member Suni Kartha at Tuesday's meeting. Kartha said it is important for schools to set tangible goals to overcome the downward trends.

Evanston/Skokie District 65 school board members reviewed the 2017 Achievement and Accountability Report at a meeting Tuesday, expressing concern about the achievement gap and declining test scores.

At the Joseph E. Hill Education Center, board members discussed the report, which demonstrates a district-wide downward trend in scores between 2016 and 2017. It also shows an achievement gap affecting students of color, students on free or reduced lunch and students on Individualized Education Programs — which provide services for students with learning disabilities — across four standardized tests.

“It is sobering data,” board president Suni Kartha told The Daily. “We need to accelerate how we’re going to turn this around.”

Kartha said it is important for schools to set tangible goals to overcome the downward trends. She said the new work-plans format, introduced at the board meeting to help principals evaluate the year ahead, could help principals be more intentional about increasing test scores and closing the achievement gap.

The report compiles data from four standardized tests: the Developmental Reading Assessment, the Illinois Snapshot of Early Literacy, the Measures of Academic Progress and the Partnership for Assessment of Readiness for College and Careers.

Test scores increased from 2015 to 2016 but have decreased since. Though board members had seen the 2017 test scores before, District 65 officials synthesized the data from the 2016-17 school year into the report.

Board member Sergio Hernandez said at the meeting that the decline may have resulted from a combination of changes in exam structure, technological difficulties and both national and local political challenges in 2017. He said a potential solution to the achievement gap could be hiring a director of black student achievement.

“It would demonstrate that it’s a commitment that we make as a district, similar to having our director of English Language Services,” Hernandez said. “But it shouldn’t be something done in isolation.”

The board also investigated negative results from the Illinois Snapshot of Early Literacy — given to kindergarteners — and Developmental Reading Assessment, given to students in kindergarten through third grade. Hernandez said the district should provide a more “holistic” picture of students than standardized tests can provide, especially for kindergarteners.

Kartha said parents are concerned about low Illinois Snapshot of Early Literacy results, regarding their children’s “kindergarten readiness,” but the term is a misnomer.

“(ISEL) is a very narrow model,” Kartha said. “There are a lot of other factors going into kindergarten. … It creates a lot of anxiety to tell parents that their kids are not kindergarten ready, when … they’re just not reading ready.”

At the meeting, Ald. Cicely Fleming (9th), founder of the Organization for Positive Action and Leadership, said she was frustrated the district had failed to address the achievement gap.

“I am starting to lose hope for the district given the long span of the achievement gap,” Fleming said. “It looks like now we are on the downward spiral.”

Kartha said that the board would take action about the achievement gap next Monday on Jan. 22.