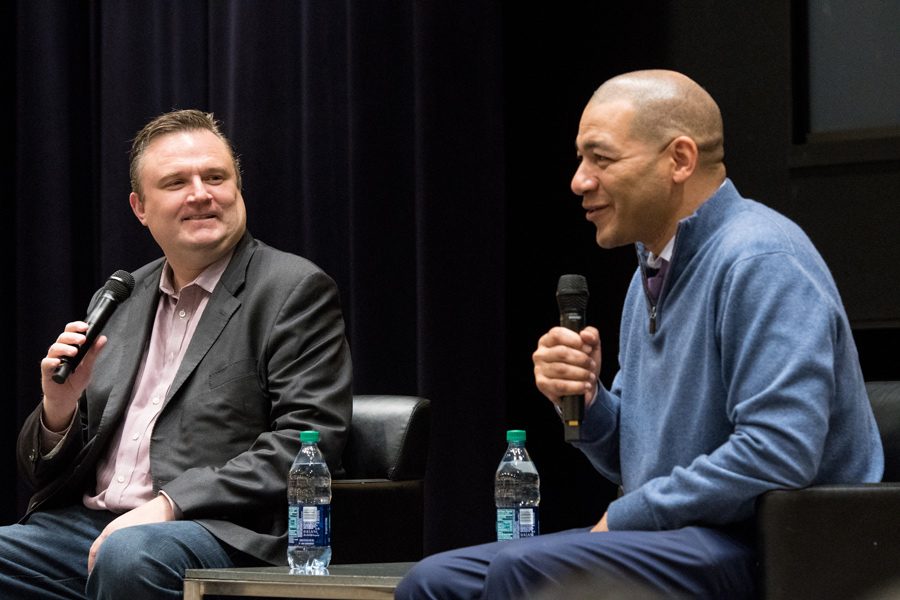 Daryl Morey (McCormick ’96), general manager of the Houston Rockets, spoke to students on Wednesday about the central role of data in basketball.

Speaking to a full crowd at the McCormick Foundation Center Forum, Morey discussed NBA analytics, the current state of sports reporting and his personal experiences with the Rockets. The event was organized by the Contemporary Thought Speaker Series and moderated by Medill Prof. J.A. Adande (Medill ’92), who directs the Medill School of Journalism, Media, Integrated Marketing Communications’ sports journalism program.

Morey said his background in computer science and statistics gives him an edge in an industry populated with managers who have sports-centric backgrounds. He said unlike many other managers may not be as familiar with data analytics, his background allows him to succeed in trade agreements and NBA recruitment from colleges.

“We look at what we need to win and what to make that happen,” he said.

He added that during a major rebuilding period for the Rockets, supplementing his decisions with findings from data helped him stabilize the team.

However, Morey said media outlets “blew the incident out of proportion” and overdramatized the incident.

“A lie gets around the world before the truth gets its shoes on,” he said.

Trevor Lystad, vice president of finance and development for CTSS, said this was the first time the group had brought a sports figure to speak on campus. The SESP sophomore added that Morey was the “perfect person” because of his unique viewpoint on the sports world.

Morey emphasized to the audience that basketball as a sport today is so much different from when it was created.

“The game has evolved and changed,” Morey said. “The vocabulary has changed, the style of play valued has changed and the importance given to analytics has changed.”

Mylan Henderson, a SESP senior who attended the event, said he was interested in the event as a basketball fan. Henderson added that after learning Morey was a McCormick graduate, he wanted to know how Morey transitioned from being an engineering major to becoming a general manager of an NBA team.

“I always knew that the NBA was data-driven and analytics-driven, but just to see how specifically and how much that actually influences trade decisions and different decisions like that was eye-opening,” Henderson said.