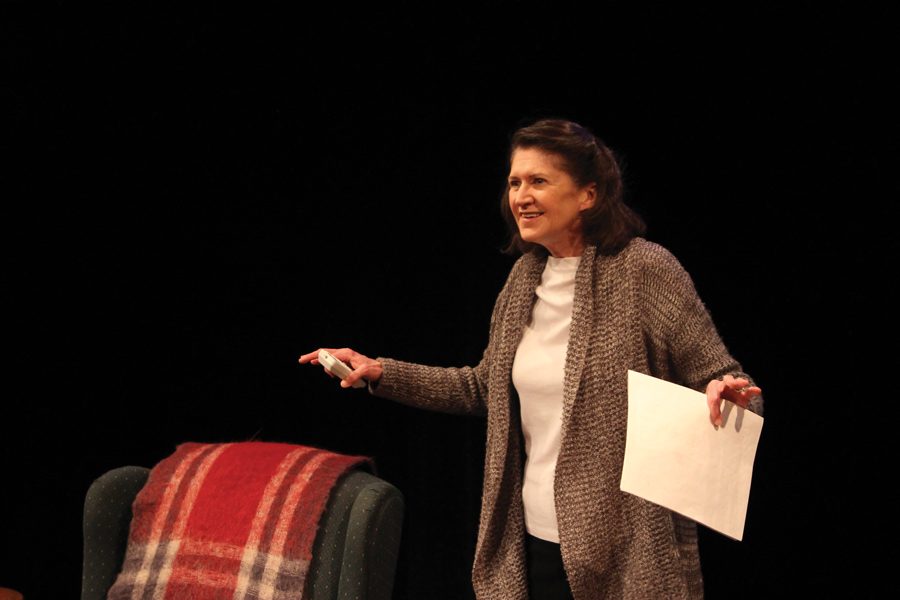 Molly Regan performs in “The Accidental Curator.” The one-woman show is based off of essays Regan wrote about her family’s stories.

When Northwestern alum Molly Regan (Communication ’73) began contemplating turning her family stories into a play, Steppenwolf Theatre told her they didn’t have a space for one-woman shows. Regan ignored the warning and wrote on.

Just last weekend, she performed “The Accidental Curator” at Steppenwolf, from Jan. 12 to Jan. 14.

Originally a series of essays based on Regan’s unusual family stories, the show focuses on her realization that she is responsible for deciding what to do with the stories of her past. Mary Robinson — the show’s director who has collaborated with Regan several times before — urged her to turn the written essays into a theatrical piece.

“Taking them from a literary thing into a theatrical thing was the trick, because I had to cut an enormous amount in order to streamline them and (give) a forward motion to it,” Regan said.

Robinson said she believed the essays’ great storytelling and dramatic, theatrical elements made them fit for a stage adaptation. She praised Regan’s characters as being written with strong detail and “human interest.”

Robinson said “The Accidental Curator” has changed her own perspective on passing on family belongings and stories, and believes it will have the same effect on audience members. She added that it features a topic not often explored in theatre: the universal milestone of being tasked with preserving your family’s legacy.

“The piece is about something that everybody deals with, which is what you do with your family’s history and your family’s things,” Robinson said. “How do those things get passed down from generation to generation?”

Regan said she found it difficult to perform as a version of herself, as opposed to a preconceived, separate character, as who she portrayed onstage is not representative of her full being.

“I’m myself, but it’s the point of view of the self that wrote these stories, which is a little different from my real self,” Regan said.

Greta Honold, the producer of the show, said the audience had an overwhelmingly positive response to the piece. Many audience members are long-time fans of Regan, she said, and were excited to see her working as both playwright and actress.

Regan has experience as an actress, but she said performing her own piece is a different experience from realizing someone else’s work onstage. While she initially found it difficult to step out of her comfort zone and break the fourth wall, she is now comfortable engaging directly with the audience, she said.

“You know what I feel like I’m doing when I stand up here?” Regan said. “I’m talking to the audience, they’re now my scene partner.”

Regan said she endeavored to create a piece with a relatable and resonant nature that will touch audiences. She hopes it encourages the audience to leave considering the show in the context of their own families.

“Even though my stories are specifically mine, I’m trying to find the universal in the specific,” Regan said.