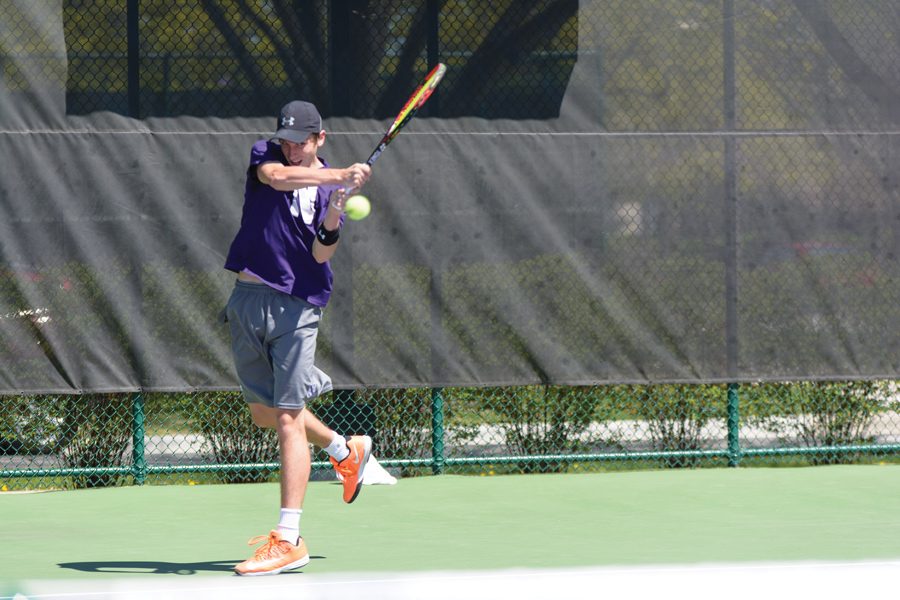 Ben Vandixhorn hits a backhand. Coach Arvid Swan said the junior has stepped up to lead the young team as the Wildcats head into their first match.

Last year, a 6-1 win over North Carolina State came at the peak of Northwestern’s season in February. It gave the team the best start in Wildcats history with a 10-0 record and a season-high No. 7 ranking. However, NU would lose six of its next seven matches and its season came to a close in the second round of the NCAA Tournament, sooner than seemed likely after that match in Raleigh.

This year, the Cats will kick off their season at home Thursday against the Wolfpack (2-0), and the match has an opportunity to serve as springboard to a new era after the team graduated its top three players from last season. Still, NU received votes in the preseason poll, suggesting the Cats are considered to be just outside of the nation’s elite.

“I think we’ve got expectations on us. I think it’s going to be a fun season,” freshman Antonioni Fasano said. “It’s a young team … but we’re hoping to get a good start to the season this Thursday.”

NU will then travel to Idaho for a road match Sunday against a weaker Boise State team.

The Cats added four freshmen who are likely to make immediate contributions to the team and will attempt to replace the talent that was lost at the top three singles spots. Those freshmen will be led by Fasano, who was ranked the No. 8 newcomer in the country and also performed well during the fall, winning the Big Ten Singles tournament. Fellow freshman Nick Brookes also performed well during the fall, winning a team-high eight matches.

However, the dynamic of the the head-to-head matches are different from the individual tournaments during the fall, sophomore Dominik Stary said.

“The dual matches we are playing for the team, we’re not playing for ourselves,” he said. “It’s important to stress playing as a team, just being out there for each other in the match and being supportive of each other.”

NU will go into Thursday’s match with a much different lineup than in last year’s meeting, and so will North Carolina State. The Wolfpack have a new head coach and six freshmen on their roster, including two recently-signed international players. Both were a part of North Carolina State’s singles lineup in its first two matches.

The Cats will have to face new challenges with their young roster. The team does not have any seniors, but coach Arvid Swan said the juniors — particularly Ben Vandixhorn — have stepped up to lead the team. Stary also said the team had become closer, which he believes will help them throughout the season.

These early season matches will provide a test to their new players who have yet to experience regular season college tennis, and Swan said he is focused the most on their competitive energy.

“It’s really just about competing really hard and staying relaxed and loose. If we compete hard, I’ll be pleased with the results,” Swan said. “Part of having a young team is understanding the team dynamic and supporting each other throughout the match.”