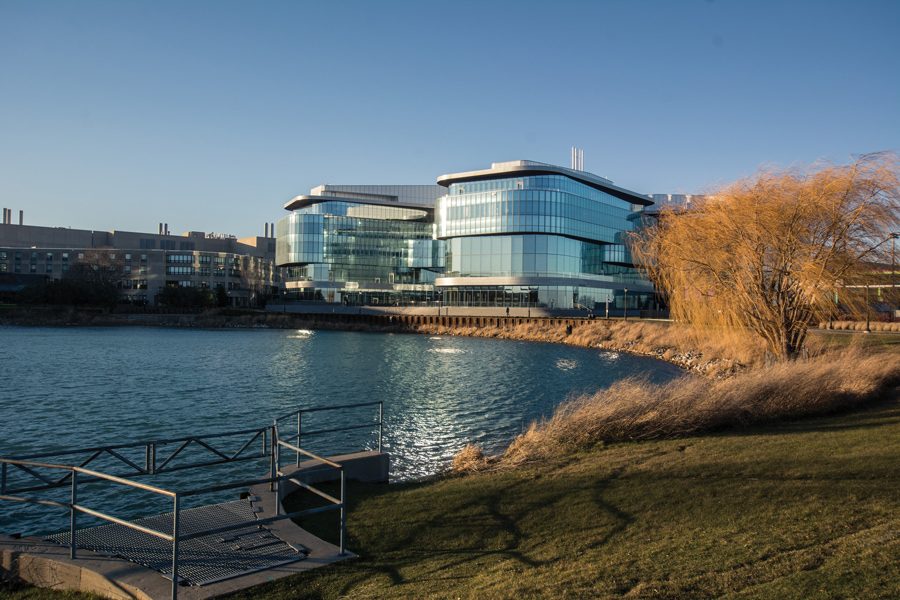 The Kellogg Global Hub is now Leadership in Energy and Environmental Design platinum-certified, according to a Thursday news release.

Northwestern’s latest lakeshore glass monolith, completed December 2016, is the first new building on campus to receive the highest level of LEED certification. LEED certifications are awarded by the U.S. Green Building Council to evaluate and recognize environmentally friendly buildings for their sustainability and energy conservation.

The Council reviews features such as water usage, indoor air quality and other sustainability factors to determine whether a building deserves the certification.

“Part of the message that we’ve always sent is that we never bought platinum. We built the building the way we wanted to build it,” McCrudden said. “The fact that it became platinum only (shows) how well the University and Kellogg delivered on that.”

The 415,000 square foot building, which houses the nationally-ranked Kellogg School of Management and the Weinberg College of Arts and Sciences economics program, joined the recently-renovated Kresge Centennial Hall as the second platinum-certified building on campus, and the first new construction to receive that distinction.

The Global Hub received a score of 85 out of 110 points for LEED standards. For a building to be platinum-certified, it must score at least 80 points. Kresge Centennial Hall, which was certified in September 2017, scored 86 points. The platinum certification is the highest level of classification.

Vice president of facilities management John D’Angelo echoed McCrudden, saying the building was constructed primarily as a space for Kellogg and economics students.

“The goal was to create a destination building for both business and economics,” D’Angelo said. “To create a really collaborative space for the students, as well as for the educators and the researchers that use that building. To take advantage of one of the things that’s uniquely Northwestern in our position on the lake and create incredible views.”

In particular, energy efficiency is prioritized in the Global Hub, McCrudden said. Triple-glazed windows and automated shades help to protect from both heat loss and overheating.

“Heating and cooling are really the biggest energy (drains) for most buildings,” said Stephanie Folk, sustainability communications manager for sustainNU. “In Kellogg they put in a geothermal system that’s harnessing energy from the ground and essentially moving heat rather than generating it.”

The Kellogg Global Hub is one of about a dozen Northwestern buildings to receive a LEED certification on the University’s Chicago and Evanston campuses, said D’Angelo. He added that the new 560 Lincoln is also in the process of undergoing LEED certification.

According to McCrudden, the Kellogg Global Hub is also one of the largest in the country in terms of LED use, with a total of 6,500 LED lights.

Beyond its reduced environmental impact, William Garrett, Kellogg’s chief operating officer, said its impact on the school itself cannot be understated.

“We are … one of the pre-eminent business schools in the world,” Garrett said. “When you come to this building, you feel like it. Reputationally, it sends a signal.”