Pope: Face it, Northwestern won’t be dancing this March 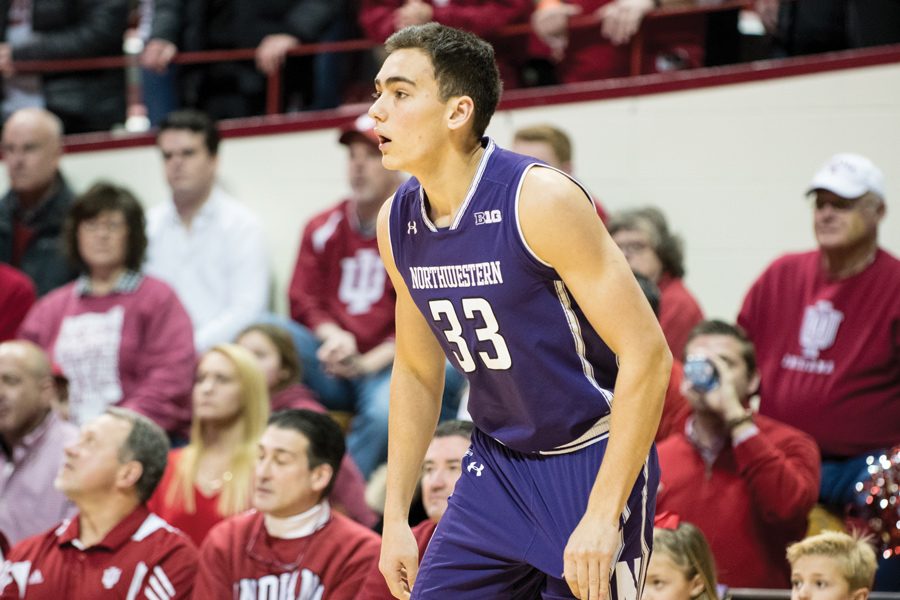 Tino Malnati waits for a pass. The Wildcats offense was so lifeless that they turned to the redshirt freshman, who has scored no points all year, at the end of the game.

Spending Spring Break 2017 in Salt Lake City was fun. The city was blessed with unseasonable warmth, the streetcars were packed with visitors to the NCAA Tournament, the ski slopes and Comic Con all at once, and best of all, Northwestern beat Vanderbilt in their first-ever dance.

It would’ve been fun to check out a regional host city like Boise, Pittsburgh or San Diego this time around. But I’m booking plane tickets elsewhere.

Northwestern men’s basketball is now a mediocre 11-8 overall and 2-4 in the Big Ten. The team has been blown out in three of its last four games. Barring a miraculous turnaround — and I’m more inclined to believe it’ll be 80 degrees next week than that such a turnaround will happen — the Wildcats won’t be sniffing the Big Dance this year.

Yes, the football team was in a seemingly similar situation last fall, sitting 2-3 overall and 0-2 in the conference after a lopsided 24-point loss to Penn State. Yet I still believed wholeheartedly at the time that the Cats would end up fulfilling their lofty preseason expectations, and they ultimately did, going a perfect 8-0 from that day on.

So what makes these two scenarios different? One key reason: the schedule.

Only one of NU football’s last seven regular season opponents ranked among the top 40 teams this season in S&P+, an all-inclusive evaluator of team performance.

Conversely, of NU basketball’s 12 remaining regular season games, four are against top-20 teams and seven are against top-50 teams in Kenpom, another similarly-advanced evaluator.

For the Cats to match last season’s 10-8 conference record, they’d need to win eight of those 12 games. For them to match last season’s 21-10 overall regular season record, they’d need to win 10 of those 12 games. And even then, given the Big Ten’s relative weakness this season and NU’s lack of any quality non-conference wins, a tournament invitation could prove an uncertain proposition.

Plus, asking this team to win 10 of 12 down the stretch in Big Ten seems a bit like asking a pack of literal wildcats to rebuild Welsh-Ryan Arena. It’s just not possible.

Excluding last week’s win over a Minnesota team missing two of its four best players, NU’s best win this season is against Illinois, which is No. 95 in Kenpom. Meanwhile, it just lost handily to 81st-ranked Nebraska and 89th-ranked Indiana, not to mention 102nd-ranked Georgia Tech earlier on. By comparison, last season, the Cats beat seven top-50 teams in Kenpom and lost to only one team outside the top 50.

It would take many, many more columns to analyze the perplexing reasons why NU, despite returning its top five scorers, is so much worse this season. In fact, we may never really have a conclusive answer.

One thing is nevertheless certain: the Cats are, indeed, much worse. They won’t be gracing the NCAA Tournament this year. A purple-clad mob of fans won’t be migrating to another distant arena this March.

I hear the Bahamas are nice, though.