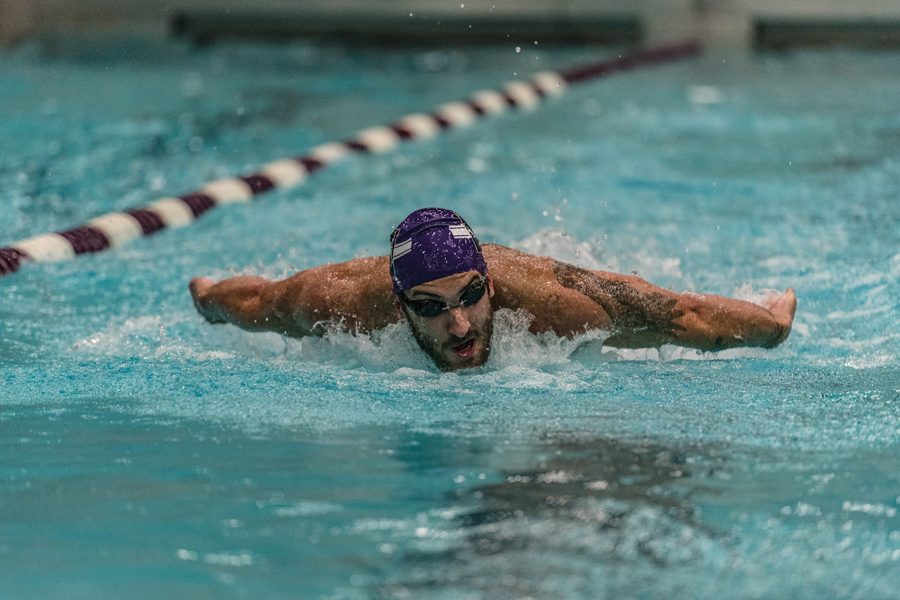 Nick Peterson takes a stroke. The senior helped Northwestern pick up its fourth dual meet win of the season this weekend at SMU.

Northwestern started the winter portion of its season Saturday the same way it ended the fall — with a victory.

The Wildcats, who hadn’t competed since winning the TYR Invitational in mid-November, showed no signs of rust as they led host Southern Methodist from the outset and secured a 158-122 triumph. NU recorded 11 first-place finishes on the day.

In Dallas, the Cats (4-6, 0-1 Big Ten) set the tone in the opening event. Juniors Jack Thorne, Will Hofstadter and Ryan Tate and senior Almog Olshtein out-touched SMU’s top team by two-tenths of a second to win the 200-yard medley relay. NU led 13-4 after the event.

The Mustangs (1-3) pulled closer in the next event, the 1000-yard freestyle, but the Cats took control from there. NU won nine of the next 10 events, including six in a row at one point. Freshman Liam Gately won both the 200 and 500 frees, and Hofstadter touched first in the 100- and 200-yard breaststrokes.

The Cats also got first-place finishes from Thorne in the 100-yard backstroke, Olshtein in the 50 free, Tate in the 100 free and junior Tyler Lis in the 200 back. Each earned NU nine points for his win.

“I was pleasantly surprised,” Lis said. “It was an in-season best for my 200 backstroke by a full second, and it was just everything I wanted it to be.”

While the first-place finishes certainly helped, the Cats’ depth was crucial in securing the win. NU finished second in every event in which it did not take first. In four events, the Cats took both first and second place.

In its last few meets, NU has benefitted from the presence of junior Ben Magliato, the team’s only diver. Magliato missed the first month of the season with a concussion, returning Nov. 11 against Wisconsin. Saturday, Magliato won the 1-meter diving event, and was the only entrant in the 3-meter competition. He earned the Cats 18 points in total.

After the 3-meter event, NU led 158-89. The Cats then treated the last two events as exhibitions, something done in lopsided meets to prevent running up the score. SMU thus received all available points for those events, meaning the meet was not nearly close as the score indicated.

“With such a big freshman class, a lot of the improvement comes from them having a handle on what competing at the college level really is,” Lis said. “As a team, it shows how we’re all familiar now with each other’s races and how we all need to approach (them).”

NU will look to build on its recent momentum Saturday, when the Cats host Iowa. They are hoping to snap a three-meet losing streak against the Hawkeyes, whom they beat for their last Big Ten dual meet win in January 2014.