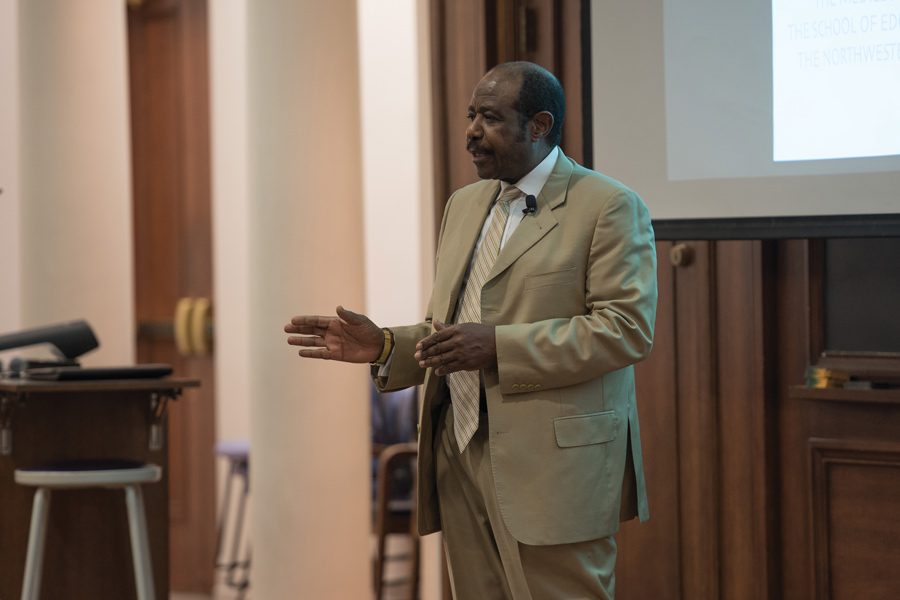 Paul Rusesabagina speaks at the Northwestern University Community for Human Rights keynote. Rusesabagina is a Rwandan humanitarian and survivor of the Rwandan Genocide.

Paul Rusesabagina, a Rwandan humanitarian and survivor of the Rwandan Genocide, told a crowd of students Thursday evening to lead as humanitarians in the future.

“Today, I am talking to you as humanitarian leaders,” Rusesabagina said. “And I am telling you that you each have a humanitarian mission to shape the future.”

Rusesabagina, the keynote speaker for Northwestern University Community for Human Rights 2018 conference, spoke about his experience during the Rwandan Genocide.

The Rwandan Genocide of 1994 was a 100-day mass slaughter of the ethnic Tutsi under a Hutu-majority government. At that time, Rusesabagina was the hotel manager at Hotel des Mille Collines in Kigali. He turned the hotel into a sanctuary for over 1,000 Rwandans, a story that later inspired the award-winning 2004 film “Hotel Rwanda.”

Rusesabagina said in the keynote that his mission began with his name. “Rusesa” means to disperse and “Bagina” means enemies. He said he has always understood his mission to become “the one who disperses enemies.”

Reliving harrowing, personal stories from the genocide, Rusesabagina spoke about lessons in destiny, perseverance and morality. In one story, he described seeing the six-story hotel surrounded by armed soldiers.

“For the first time in my life, I lost hope and said to myself, ‘This is the end,’” Rusesabagina recalled. “But believe me, it is never the end before the end.”

When Rusesabagina was confronted with the choice between protecting all the Rwandans who sought refuge in the hotel or evacuating with his wife and children, he said if he had chosen to leave, he would never be a “free man” in his conscience.

As a humanitarian, Rusesabagina emphasized his belief that all men who were responsible for the deaths of other civilians are criminals, regardless of whether they were ethnically Hutu or Tutsi. However, some audience members felt that he had misrepresented the event as an equal conflict between the Hutus and the Tutsis rather than a genocide.

“If it were both Hutus and Tutsis killing each other, that would be called a war,” McCormick freshman Claudia Kalisa, who is from Rwanda, told The Daily. “There is a reason it was called the genocide against the Tutsis.”

Others, however, said they enjoyed the presentation. Carnegie Mellon student Zachary Rapaport said that after watching “Hotel Rwanda” and reading some of Rusesabagina’s literature, listening to his presentation further inspired him to learn more about the history of the genocide and similar events from the past.

NUCHR hosts the largest annual student-run human rights conference in the nation with student delegates from universities across the country to encourage international dialogue on human rights issues. This year’s conference, “Do You Remember?: Deconstructing Memory Within Human Rights,” features 15 speakers.

“Hearing his lived realities is particularly salient for future humanitarian leaders,” Wrobel said. “Doing our jobs, whatever that is, is how we can not be silent in situations of injustice and how we can make the world a better place.”