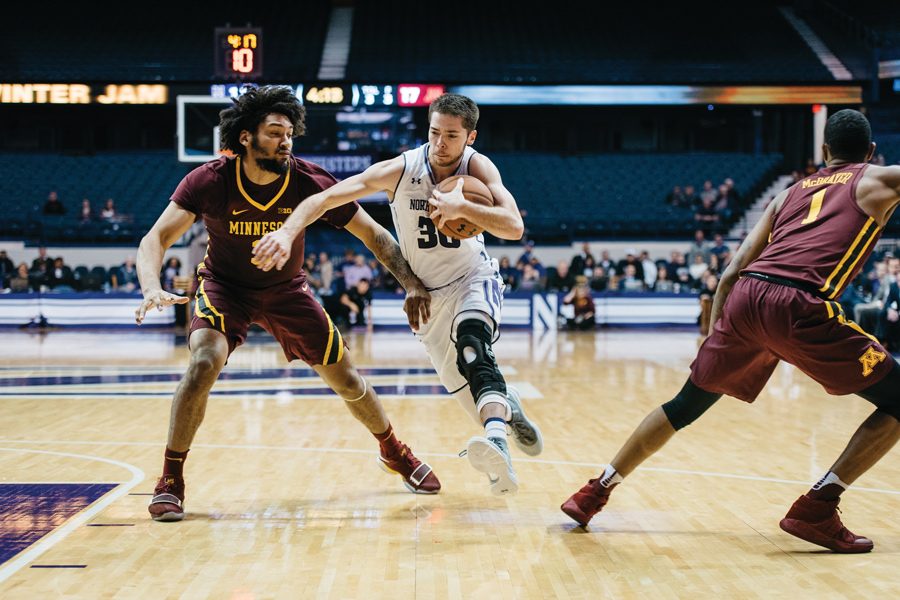 Bryant McIntosh drives to the hoop. The senior guard set a school record with 16 assists in Wednesday’s dismantling of the Gophers.

ROSEMONT — The free throw rolled all around the iron — twice — and wobbled out.

Bryant McIntosh just laughed. After 16 assists, that was a shot he could afford to miss.

On an night where just about everything went right for McIntosh and Northwestern, (11-7, 2-3 Big Ten) the senior guard still got the double-double that the free-throw miss had temporarily cost him — a patented floater in the lane moments later took care of that. But his 11 points on the night were far from McIntosh’s biggest impact.

“McIntosh just managed a brilliant game and got us the right shots all night,” coach Chris Collins said. “He was just hand-delivering, he was making all the right decisions. We found some things in the pick-and-roll game, had the ball in his hands, and guys were spaced (out).”

Just 12 days earlier, on the very same Allstate Arena floor, McIntosh was writhing around at midcourt after a Brown player rolled up on his knee.

Collins said he was scared about the injury. McIntosh said he was convinced his collegiate career was toast.

“I couldn’t help but continue to look at my jersey as if it was the last time I was ever going to wear it,” McIntosh said Tuesday, thinking back to the incident. “It taught me how special this place is, and you know that while you’re here, but maybe you don’t appreciate it as much.”

He ended up missing just one game, then returned last Friday against Penn State. But NU lost both contests, and found itself desperately in need of a victory entering Wednesday’s matchup against Minnesota (13-5, 2-3).

McIntosh single-handedly made sure that came to fruition.

It took him less than one minute to tally his first assist of the night, finding junior forward Vic Law for a 3-pointer that opened the scoring. Thirty-nine minutes later, McIntosh had assisted on six Scottie Lindsey buckets, helping his ice-cold fellow guard break out with a game-high 22 points; on five Dererk Pardon dunks and layups, representing a drastic change from the force-feeding method the Cats had used with Pardon in recent weeks; and on three Aaron Falzon shots, helping the sophomore forward score a season-high 15.

“He got me definitely going early in the game, and then throughout the rest of the game when (Minnesota) was trying to make their pushes, he got in the lane and was finding guys,” Lindsey said. “What B-Mac does every game is huge for us.”

Meanwhile in Indianapolis, Baldwin’s new team, the Milwaukee Panthers were losing a heartbreaker at the buzzer to IUPUI. The former Cats assistant likely had no idea McIntosh, his protege the past three years in Evanston, had just usurped his long-standing record.

But McIntosh said Wednesday night he would be waiting for the moment when Baldwin finds out.

“It was Rutgers my sophomore year that I was really close and coach Collins pulled me, and I think (Baldwin) really wanted me to break it,” he said. “Just knowing I was able to go out and break it and share that with him will be really neat. I’m really excited to hear from him.”