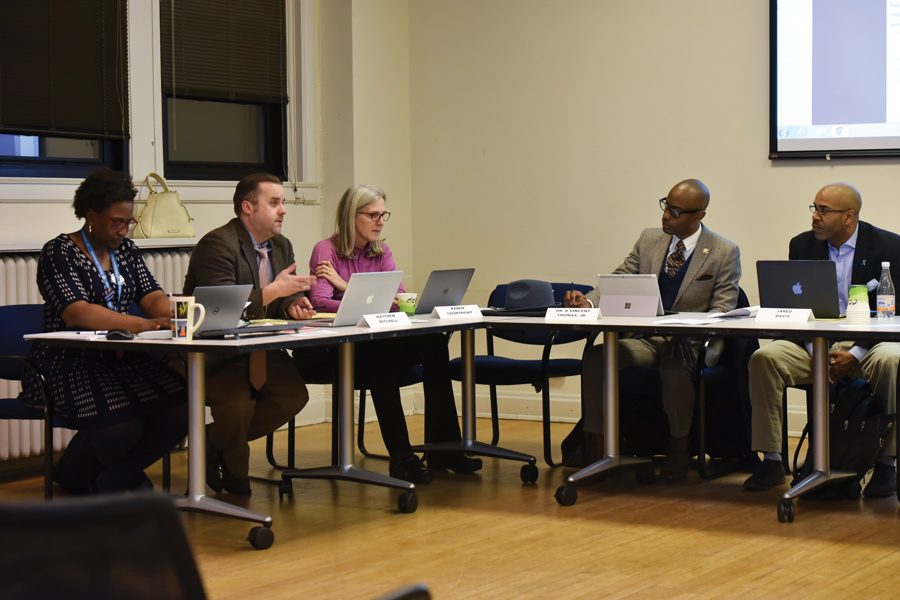 Committee members discuss the police complaint process at a meeting. The committee will release a survey to garner public opinion about the process.

The committee, which held its first meeting in October, is in the beginning stages of reviewing the current citizen complaint review process, said committee member Karen Courtright. It will then provide recommendations to the Human Services Committee by May.

The first priority of the committee — which is comprised of nine members appointed by Mayor Steve Hagerty and functions independently of Evanston Police Department — is to investigate the decline in complaints filed over the past few years. Only 17 formal complaints were filed in 2016.

The current process in Evanston begins with an investigation conducted by EPD. The findings of the investigation are then presented at Citizen Police Advisory Committee and Human Services Committee meetings. The two committees then vote to determine if formal or informal action should be taken against an officer.

Committee members said they were interested in implementing a process that includes a third-party mediation between the complainant and EPD.

“There’s not a consensus as to what is the best practice,” committee chair Matthew Mitchell said. “All of these have pros and cons.”

The committee is also looking to the complaint practices of other comparable cities across the country that it could recommend to the Human Services Committee. In a review of oversight models, for instance, the Police Assessment Resource Center outlines the complaint processes of thirty U.S. cities.

Committee member Peter Demuth said that for Evanston, a college town with a diverse population, it may be best to implement a combination of other cities’ models.
“All these other towns, they’re different,” Demuth said. “We might have to take a look at us. This starts with how we can improve the relationship between the community and the police department.”

Mitchell said he plans to meet with Hagerty and Evanston Police Chief Richard Eddington to discuss the committee’s progress before its next meeting.