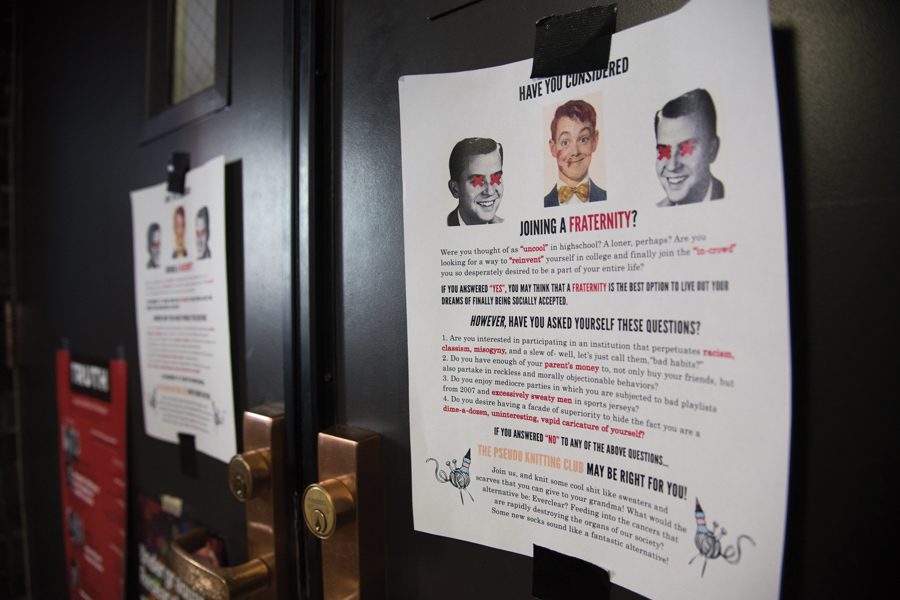 A flyer found in Fisk Hall calls for students to attend a “Pseudo Knitting Club” instead of rushing a fraternity. The flyers criticized fraternities, associating them with racism, classism and misogyny.

With Interfraternity Council recruitment in full swing, flyers condemning fraternity life and recruitment were spotted early in the week at several locations across campus, including Kresge Hall and Sargent Hall.

The flyers, posted by an unrecognized group calling itself “The Pseudo Knitting Club,” begin with “Have you considered joining a fraternity?” and continue to pose a series of questions that criticize fraternity life and associate fraternities with racism, classism and misogyny.

“Were you thought of as ‘uncool’ in high school? A loner, perhaps?” the flyer reads. “Are you looking for a way to ‘reinvent’ yourself in college and finally join the ‘in-crowd’ you so desperately desired to be a part of your entire life?”

Medill freshman Arudi Masinjila said she first saw the flyer in Sargent Hall and believed it was a real club trying to recruit new members. On second glance, she read the content more closely and called it “truthful slander” toward fraternities.

“It’s funny but it also raises important questions with a tinge of humor, which a lot of times is an effective way to get people thinking,” she said.

Kourtney Gray, director of Student Organizations and Activities, said the flyers are not in line with University policies.

According to SOA publicity and advertising policies, only formally recognized organizations are permitted to post banners or flyers on campus. “The Pseudo Knitting Club” is not a registered student organization, Gray said.

“It doesn’t follow our posting guidelines and there’s no organization by that name, so both are not approved,” he said. “Entities that are not (the University) … have to get approval through certain departments or certain buildings to even post on campus before they do that.”

IFC president Rodney Orr told The Daily his initial reaction upon seeing the posters was disappointment.

Orr said the flyers overgeneralize by using the word “fraternity” when they are specifically referencing the historical precedence of white fraternities. The SESP senior said this ignores the communities of National Pan-Hellenic Council and Multicultural Greek Council fraternities.

“The message is still the concept that fraternities, particularly in the IFC, have been built structurally on the concept of heterosexuality, white identity, privileged in terms of socioeconomic status, things like that,” Orr said. “That’s something we’ve all been very aware of and I think that it’s something that we’ve always had a conversation about.”

SESP sophomore Hayley Krolik, a member of Alpha Phi, said the posters offer an important perspective. She said she hopes they make people think about their decision to rush and continue to open dialogue about Greek life on campus.
Krolik, a former Daily staffer, said while she agreed the posters hold “a lot of truth,” she also felt that they were one-sided. When discussing fraternities and recruitment, there are often opposing viewpoints but not much conversation about how to move forward, she said.

“It’s like, don’t join it, and the other option is do and you suck,” Krolik said. “There isn’t a middle ground … there’s been this horrible system happening while also there’s been frustrated people and not a lot of work between the two.”